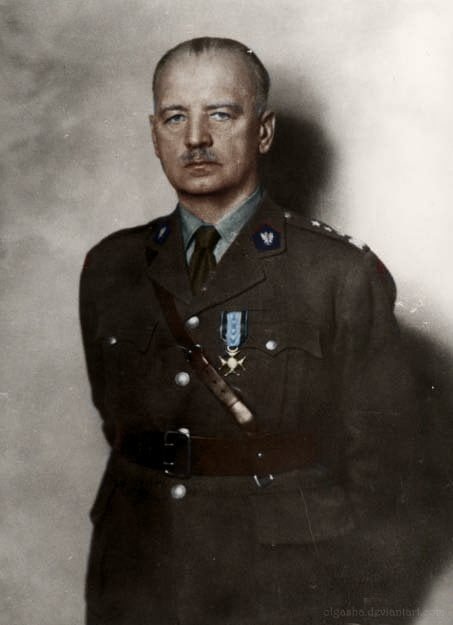 Wladyslaw Sikorski, born in Tuszow Narodowy, Poland, Austria-Hungary, was a Polish soldier and statesman who is well known for leading Poland’s government in exile during World War II.

Born and educated in Austrian Poland, Sikorski served in the Austrian army. In 1908, he founded a secret Polish military organization. During World War I, Wladyslaw Sikorski Swas commissioner of the Polish Legion, which served with the Austrian army against Russia. Between 1922 to 1923 Wladyslaw Sikorski also briefly served as the Prime Minister of Poland and between 1924 to 1925 as minister of military affairs, he guided the modernization of the army. Although Sikorski did remain neutral during Pilsudski’s takeover of the government in 1926, he joined the anti-Pilsudski opposition in 1928 after being dismissed from his command.

In the days before Poland was invaded by Germany in September 1939, and during the invasion itself, Sikorski’s request for military command continued to be denied by the then Polish Commander in chief. Sikorski escaped through Romania to Paris, where on 28 September he joined Wladyslaw Raczkiewicz and Stanislaw Mikolajczyk in a Polish government-in-exile, taking command of the newly formed Polish Armed Forces in France. Two days later on September 30, president Raczkiewicz called him to serve as the first Polish prime minister in exile.

On 7 November he became  Commander in chief and General Inspector of the Armed Forces. Sikorski would also hold the position of the Polish Military Affairs, thus uniting all control over the Polish military in wartime.

Therefore, on becoming the Prime Minister of the government in exile, Sikorski was able to establish good relations with the Allied leaders. Although, in April 1943, the Nazi regime publish the discovery and exhumation of thousands of Polish soldiers and officers in a forest near Katyn. About 22,000 Polish had been executed by members of the Russian NKVD (People’s Commissariat for International Affairs). So, in due course of World War II, the Soviet dictator, Joseph Stalin, broke off Soviet-Polish diplomatic contact in April 1943 on the pretext of Sikorski’s request that the International Red Cross investigate the massacre that took place at Katyn.

Death and Investigation of Wladyslaw Sikorski

Yet, some of the details of the crash remain unclear. This fuelled some people’s belief that he may have been killed by the Soviet Union especially after Sikorski had probed an investigation into the brutal massacre that occurred at Katyn. There was also speculation that he could have been murdered on orders issued by Joseph Stalin or British Prime Minister Winston Churchill to prevent a split between the Allies.

The crash led to the death of Sikorski, his daughter, his chief of staff –  Tadeusz Klimecki, and seven others. Only the pilot of this plane survived the crash.

An investigation uncovered that Poland’s wartime hero had died as a result of multiple organ failure, typical injuries sustained in a plane crash. Therefore, there was no evidence of poisoning, shooting, or strangulation before the crash itself occurred.

Most investigations concluded that the cargo on board the plane was overweight, leading to the plane crashing as there had been few leads since the occurrence of the incident. Yet, the possibility of sabotage was never ruled out especially because the accident led to the disappearance of Sikorski’s daughter – who’s body was never recovered.

Probe and investigation, therefore, still continue by the Polish Institute of Remembrance even 76 years after the incident.

Seth Rich, 27, was an employee of the Democratic National Committee. He was murdered...
Previous article
Was Walt Disney Influenced by Illuminati?
Next article
Big Pharma and it’s Cancerous Secret.
Conspiracy theories