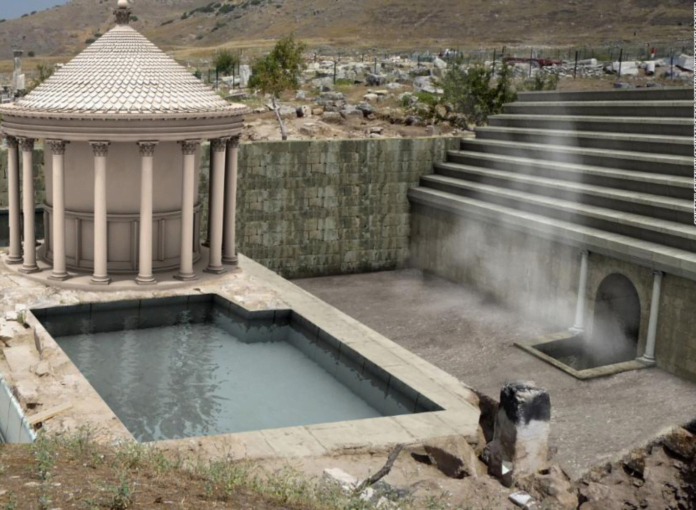 The sacred sanctuary of The Hierapolis Ploutonion is located in Hierapolis—a classical Phrygian city—that is now part of the Turkish province of Denizli.

In the 2nd century BC, the Attalid rulers of Pergamon built Hierapolis as a thermal spa. Physicians believed that the nearby calcite-laden thermal springs would have medicinal properties that will help the sick and chronically ill, and the city became a religious center of healing.

Pergamon was ceded to the Roman Republic after the death of the last Attalid monarch (Attalus III) in 133 BC and became part of the Roman province of Asia (also called Asiana).

As a result, people from the classical world worshipped them. People come to Pluto’s temple to worship the God. The location is quite old, and it has a tumultuous past.

Ploutonion was worshipped in a variety of ways, all of which were dangerous. The Hierapolis Ploutonion was built in honor of Pluto—The Roman God of the Underworld, his Greek cognate being Hades—and his wife Kore during the early Imperial period, between 100 BC and AD 100. The refuge was built on top of a natural cave that spewed boiling fluids and deadly volcanic carbon dioxide (CO2), which Pluto transmitted as a suffocating invisible mist.

The cave was utilized for ceremonies by the Galli, eunuch priests of the goddess Cybele, who would enter the chamber through the “gateway to hell” to show their divine protection and make sacrifices.

Several ancient writers, including Strabo, Cassius Dio, and Damascius have described the Ploutonion as a small cave, just big enough for one person to enter through a gated entrance, beyond which stairs lead down and suffocating carbon dioxide gas is emitted due to underlying geologic activity.

A deep crack in the rock behind the 3 square meters (32 square foot) roofed chamber allows fast-flowing hot water to pass through, releasing a sharp-smelling vapor. The gas was considered to have been sent by Pluto, the god of the underworld because it was lethal.

In front of the entryway was a 2,000 square meter (22,000 square foot) enclosed patio. It was engulfed in a thick layer of suffocating gas, killing everyone who attempted to enter. Visitors were sold birds and other animals by the priests to test how dangerous this enclosed environment was. They could ask the oracle of Pluto questions for a price. This supplied the temple with a large stream of revenue. During Christian times, the Ploutonion’s entrance was blocked.

The gate was described as follows by the ancient historian Strabo: “Any animal that enters is instantly killed. I threw in some sparrows, who promptly exhaled their last breath and dropped to the ground.”

Research Done By Archaeologists At The Hierapolis Ploutonion

After Christians closed the gateway, the ploutonion was abandoned in the 6th century. This was done as part of the purging of pagan ritualism. Italian archaeologists discovered the site in 1965 and released findings on their investigations over the next decade.

Italian archaeologists led by Francesco D’Andria, an archaeology professor at the University of Salento, researched it further in 2013. A duplicate of Hades and Cerberus’ marble statue has been returned to its rightful site. It is thought that the figure has been there since antiquity.

Archaeological evidence reveals that the site was fully operational until the 4th century AD, after which it was only visited on an irregular basis for the next two centuries. Earthquakes damaged the temple in the 6th century AD.

Researchers and archaeologists have observed that the city was discovered before the discovery of Saint Philip’s Grave. It also contains one of the twelve Apostles of the Jesus Christ and the ancient 2000-year-old Theaters.

The site is currently being prepared for tourism.

A viable concept has been devised that will seal off the Toxic Gases by establishing a contained environment that is comfortable for guests and is completed with regulated entries.

In 2015, the ALS Ice Bucket Challenge took social media by storm. Friends nominated each other to dump a bucket of ice water on...
Read more

Seth Rich, 27, was an employee of the Democratic National Committee. He was murdered...
Previous article
Cerne Abbas Giant—The Mysterious Hill Giants of England
Next article
Is The Ghost Town of Cerro Gordo Haunted?
Conspiracy theories