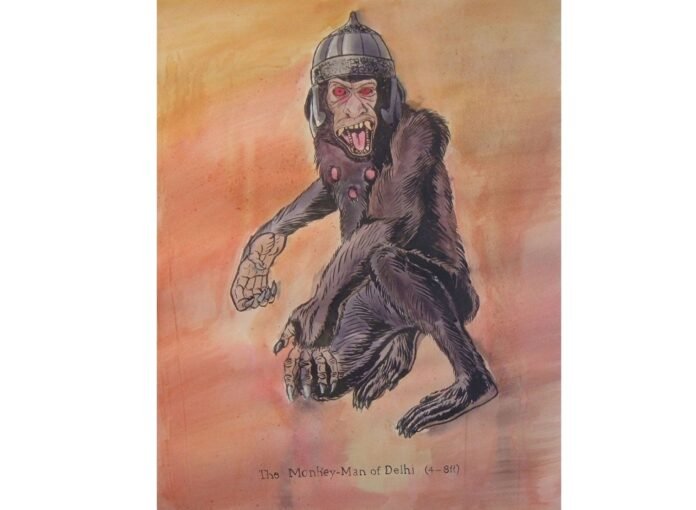 In mid-2001, India saw the rise of a new type of criminal. More than a criminal, it was reported as causing menace in the streets and terrorizing people. The accounts of every witness were different, and the local people lived in terror. This was the case of the Kala Bandar—or the Black Monkey of Delhi. Some have named it the Monkey Man.

What Was Kala Bandar?

The people of New Delhi saw a slightly bigger monkey of black colour in their neighbourhoods. Soon they realized that the creature was not just a monkey but also possessed human features. The locals then named it Monkey Man.

People reported to the police that this Kala Bandar had pushed a pregnant woman down the stairs, leading to her death. This caused increased panic in the public as it was considered a harmless prank by many.

Soon two more deaths were reported to be caused by the Kala Bandar. It had allegedly caused two people in two different places to jump off their balconies in a panicked frenzy. Then, the fear and terror only increased in public, and no one knew how to deal with it.

Sightings Of The Kala Bandar.

A lot of people had allegedly sighted the Kala Bandar. However, it was never caught on tape. Many people assisted in making the sketches of what they saw, and it came out to be a monkey the height of 4 feet and wearing no clothes, covered only by thick black hair. It had human-like features and behaved much as humans did. Others described it as being 8 feet in height, wearing a metal helmet, and a shirt with three buttons on. It also had metal claws in some descriptions and was muscular.

It was mostly seen on the roofs of houses and jumping from one house to another and from one telephone wire to another.

People started coming up with various theories about what the creature could be. Some blamed Pakistan, thinking it to be a national issue of sorts. While the rest took the explanation of the superhero went wrong. They felt it to be scientific experimentation gone wrong and now out of control. No one could answer any questions.

People started guarding their homes and localities. Armed groups of people would stay up all night and keep watch in the hope to catch the Kala Bandar.

The police dismissed all ideas of a half-man, half-monkey creature terrorizing the capital of India. According to them, no evidence could be gathered upon an investigation of the people who died and even those who claim to have seen it.  No scratch marks were found on the dead bodies, and they died of head injuries—falling from the balconies or toppling from stairs.

The police believed that the whole thing was a prank. Either someone was trying to settle a personal score under the guise of Kala Bandar, or it was a prank on a more extensive basis.

The police were still forced to put the police stations on high alert and employ patrol officers at night.

As expected, nothing was found.

The End Of Kala Bandar.

The terror of the Kala Bandar eventually died off, and it became no more than a talk of legends and myth. It was never caught, nor was it ever captured on camera. No one could stop it, and it was written off as a prank, and the prankster got scared off when the police were involved.

The legend of the Kala Bandar was all but forgotten till 2009 when a movie was released about Delhi in 2001 and the terror of Kala Bandar. “Delhi 6”, directed by Rakeysh Omprakash Mehra, was released in 2009. It had the Kala Bandar in the backdrop, and the creature was supposed to be the evil that we all have inside ourselves. The film brought the topic back to relevance, but eventually, it died off again as there was nothing more to the story.

The legend of Kala Bandar does sound like something out of a movie, but it was a genuine incident that terrorized and traumatized the people of Delhi. Nothing is found about it adds more to its mystery. Was it just someone dressed in a monkey costume playing a prank, or did we experience something otherworldly?

Is It Strange That Earth Is Going Dark For 2 Weeks?

You must've read about the Earth going Dark on your social media or even in the Google recommendations. The internet is flooded with a...
Read more

Leonardo da Vinci was an esoteric 15th-century artist and thinker of Italy, whose mysterious...
Previous articleDark Side of The Moon: What Mystery is the Moon Hiding?
Next articleAnne Boleyn—The Execution Of The Queen Of England
Conspiracy theories