Who was the first Man or a woman to walk the earth? 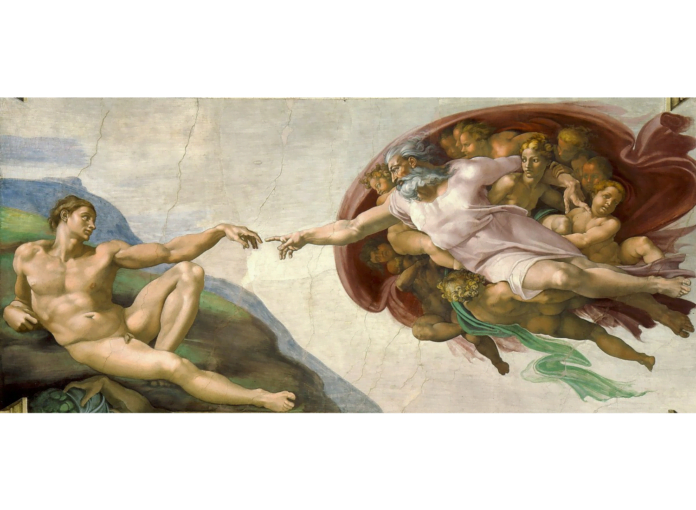 Has it ever happened that you are taking a stroll in a park and suddenly, you stop in your tracks and think- “But how did I ever get on the planet? Who was the first one to get here? Who was the first man to walk on this planet?” No? Okay, that was a little far-fetched. But, everyone must have thought of it at some point in their life. So, everyone tried to give a version of their own on how humans began existing on this wonderfully habitable planet, be it the distinguished religions or the science guys. And the first human here, was it even a man? Or was it a woman? Let us try to unravel this mystery.

Mythological Explanations About The First Man On Earth

A plethora of explanations are written in our mythological texts. People say there is an answer to every question, a solution to every problem of this universe, in GEETA, the religious textbook of Hindus. Maybe, there could be something about our very first human ancestor in similar mythology books.

In Hinduism And Buddhism

As far as the Manusmriti and Vishnu Purana is to be believed, the first man on earth is Svayambhuva Manu, the spiritual child of Lord Brahma (he is known as the creator of the universe).

So, the story goes like this. Brahma is said to create a beautiful girl, named Shatrupa, along with Manu, as per Brahma Purana. As soon as she emerged, Brahma got attracted to her. Shatrupa tried to hide but wherever she used to go, a Brahma head appeared. In all four directions. She leaped over all the heads in order to protect herself, a head curiously emerged over all the heads.

At this very moment, Lord Shiva intervened and made Brahma realise his mistake. He married her to Manu. They, then, had five children, two sons and three daughters. Well, goddess Sati (Lord shiva’s first wife), was the daughter of Prajapati Daksh and his wife, Prasuni, one of Shatrupa’s daughters. And this was how life was formed.

In the lineage of religions, now comes Islam and christainity and Judaism.

As per Islam, Hebrew Bible and Christian Bible, Adam and Eve were the first humans on the earth. They were married and living in the Garden of Eden, in Heaven. One day, they got curious and ate the forbidden Fruit from the tree of knowledge of good and bad.

They were Enlightened with the worldly phenomena and hence, got expelled from the garden, for having disobeyed God, and causing the fall of humanity. They then came to the earth. Adam had three sons, Cain, Abel, Seth, and three daughters, Awan, Azura, Luluwa/Aclima. This was how life began as per Abrahamic religions.

What Scientists Say About The First Man on Earth!

Science does not believe in the origin of the earth from just one human being or one source. They naturally refute all the claims made by any religion. It simply is an impossible task. They believe in evolution. That means mammals have developed, or say evolved, over time through gene manipulation. They are successful in pinpointing the various earliest human-like species, ancestor to the first man.

Evolution Is A Fact

Some people might think that evolution is a theory, however, it is a scientific fact. It can be seen in the virus or bacteria or fungi that develops some new characteristic through gene mutation and becomes successful in attacking our immune system. The reason why we get flu, cold or fever a fair number of times in our life. The best example of the evolution is the infamous COVID-19. It has genetically mutated itself and formed several strains which, every time, has a new symptom – a tragic evolution.

Origin Of Life Through Evolution

Well, it all started with a Big Bang. Familiar?  Let’s rewind a little bit more. As our earth’s four billionth birthday passed, a lot of changes, in the form of multicellularity, gene manipulation and sexual reproduction, occurred with the rise of large plants and animals. For about 500 million years, evolution took place until the disastrous asteroid, around 65 million years ago, struck the earth’s surface wiping out the dinosaurs and everything that weighed more than 25 kgs.

This marked the beginning of an era for mammals, who were the largest species alive now. So, the evolution furthered. Now, about 2 million years later, the primates began diversifying into wet nosed primates and dry-nosed primates. The latter one evolved into modern-day monkeys and apes.

About 40 million years ago, an important gene-split took place. The new world monkeys went ahead and settled in South America, where they could be found in abundance even today.

The Old-world monkeys, our ancestors, began to evolve and diversify with new facial and physical features. Now, 25 million years ago from today, the unbelievable happened. The  apes arose- great apes and lesser apes- with no tails. The oldest fossils have been found in parts of Africa, where the skeleton of modern-day humans also emerged while digging.

A lot of species like gorillas and Orangutans branched off and settled in different parts of the world up until 6 million years ago, when the great apes split into two categories – one of the species remained in Africa and went on to give rise to humanity, whereas the other species diversified in the way of chimpanzees or bonobos.

The changes in our direct ancestors were very rapid and astonishing. For around 4 million years from then, they diversified into more and more species including the ones that used stone tools, for the first time, around 3.5 million years ago. The brains began to develop with their size increasing every time they evolved into much advanced and human-like creatures.

About 2.5 million years ago, the genus “homo”, the direct human-gene, emerged, with big brains and smarter tools. But, it wasn’t until 1.9 million years ago that homo-erectus, with a fully upright body and advanced brains, arose. Tighten your seat belts because this is the point where you will begin to relate a tad bit. This species left Africa and split into a lot of other examples of homo “genus” Overtime.

After they figured out the basic skill set they needed to gain, they evolved into much-awaited homo sapiens- the modern humans. However, the truth about who is our direct “homo-genus” ancestor is vague. They lived fully- clothed, cooked their own food and developed modern speech.

Was The First Man In Fact a Woman?

There has been a lot of skepticism and debate over the gender of the first man that walked the earth. Presumably, it is male. Our religious textbooks also give away similar data. In science language, the oldest human male ancestor has been termed as “Adam” and the oldest female ancestor as “Eve”. However, research shows that these Adam and Eve lived millions of centuries apart.

Researchers say that they have different molecular clocks for their times which confirms the data. The genetic experiments through DNA analysis show that Y-chromosome, only found in males, traced its 1st ancestor as a man who lived in Africa around 59,000 years ago, whereas X-chromosome in females dated back to some 149,000 years ago.

But how could this be possible? Scientists theorized that it might be polygamy as fewer males participated in reproduction. And, if, by chance, they reproduced daughters only, their lineage ended there and they didn’t make the mark in “Adam”- the lineage of oldest male ancestors.

One other theory was put forward, which was that the Y-chromosome, responsible for masculine characteristics in a male, was a result of an evolution process. It is perfectly possible to get male genetila with XX chromosome, like trans people. It might be the reasoning behind such flabbergasted discoveries.

Also, discovered in 1974, in Ethiopia, Africa, the oldest “known” human’s ancestor, with preserved skeletons and bones, was a female. It’s a 3.2 million years old ape from the species- Australopithecus afarensis. She is very small with only 3.7 ft tall and astonishingly, she walked upright like humans. She was named “Lucy” after a Beatles song. She died as a young adult although the cause of her death remains unknown.

To sum it up, the scientists are unable to put a finger on the first man on the earth; yet. But, they discovered a lot of our human ancestors in just a matter of time so, that is something. You can entertain yourself with the ample number of series, films and documentaries, in existence, which have tried to do justice to the story of our origin. One can choose whatever theory one wants to believe in but the speculation on the origin of life remains open. So, keep guessing!

How did a poem—Tomino's Hell—written to express one's grief become associated with a deadly curse, which makes you severely sick at best, and at...
Read more

What do you think of when you hear the word “fairies”? Is it a...
Previous articleGarh Kundar : The Disappeared Mystery Fort
Next articleIs Katy Perry Actually Jon Benet Ramsey?
Conspiracy theories