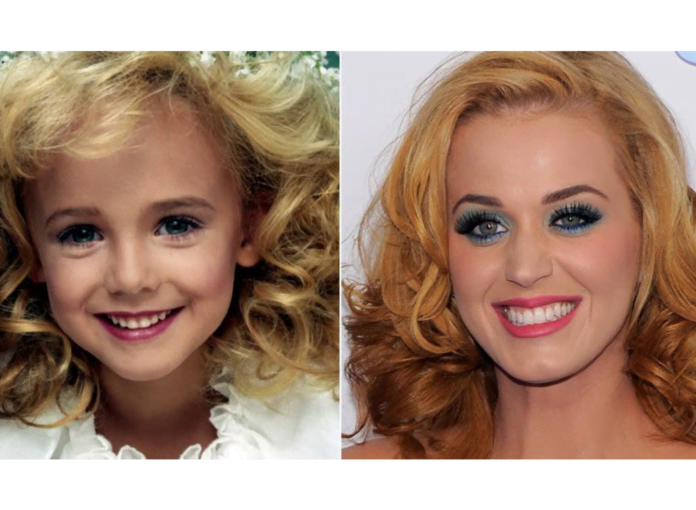 Katherine Elizabeth Hudson is an American singer, songwriter and reality show judge, who goes by her professional name Katy Perry.

She really does need no introduction. She is quite the hype in the hip hop world and is known by all generations due to her discography and television persona. JonBenet Ramsey was a little girl born in Atlanta, Georgia on 6 August, 1990 to John and Patty Ramsey and was named JonBenet Ramsey, who later won a prestigious beauty pageant too.

On 26th December, 1996 she was found murdered in the basement of her parents’ house, strangled to death. Her parents and her elder brother who was just 3 years older than her, were the lead suspects. However, the murderer was never caught. After due process, the parents were given a clean chit in 2008.

But how are these two people, one a dead child and other a huge Hollywood popstar, related to each other? Or are they the same person, as claimed by many?

It all started in 2014 when a video of a man surfaced on YouTube, claiming that Katy Perry is none other than Jon Benet Ramsey. The video went viral and fans went crazy by retweeting it time and again!

Table of Contents show
Theories
THE CONTENTIONS IN ITS FAVOUR:
The Truth Behind

In a video on YouTube in 2014, the originator of this theory, a faceless conspiracist, named Dave Johnson, claimed that the 1996 Ramsey murder case was all a hoax and that Katy Perry was kept low in order to rise to her fame and glory in the world of pop. He said that nobody’s dead and nobody’s hurt. It was all a staged show. Ramsey has only sacrificed her name.

THE CONTENTIONS IN ITS FAVOUR:

This Johnson man had gone ahead and started revealing the facts to support his theory.

Katy Perry’s parents, Keith Hudson and Mary Perry, are unbelievably identical to that of Ramsey’s parents, John and Patsy Ramsey. Katy Perry and JonBenet Ramsey have similar facial features. The similarity, on some level, is mind-boggling.

In a biography of Katy Perry, she was found talking about her childhood that, “Not that I was one of those stage kids. There was no JonBenét Ramsey inside of me waiting to burst out”.

Once, Katy Perry was seen tweeting the lyrics of the song “GOD BLESS AMERICA” on her handle. This song was sung by JonBenet once. Her recording was resurfaced again and again after her untimely departure from this world.

This left the public quite baffled.

Also, one Jungle Surfer, a YouTuber, claimed that Katy Perry and JonBenet Ramsey have similar eyebrows. He went on, “hey, look, a person’s eyebrows are something one gets by birth. And it doesn’t change. Perry and Ramsey don’t have very dissimilar eyebrows, if you notice. This whole entertainment industry is a charade. You really don’t know the truth”.

These are nothing but some baseless and quite outrageous theories that have been put forward, right? Alleging a child’s murder as some orchestrated stage drama, is a bit of a stretch, don’t you think?

However, these contentions has been shushed for once and for all. After some solid incidents, these theories can be put to rest.

Patty Ramsey suffered from ovarian cancer in 2006 and eventually passed away. John Ramsey then married again in 2011 to fashion designer, John Rousseaux.

There’s an age gap of 6 years between Perry and Ramsey. The 31-year-old popstar,  who was born in 1984 is older than Ramsey, who was born in 1990. So, the singer would have been 12 years old at the time of Ramsey’s death. This significant age gap shows just how hollow this conspiracy theory is. However, people tried to clarify by saying that the age gap was deliberate so that no one would notice.

While hosting MTV’s VMA 2017, In Billy on the Street fashion, the comedian, Billy Eichner asked Katy a string of rapid-fire questions. And one of them happened to be about whether or not the singer is actually JonBenet Ramsey.

“Blink twice if you’re actually JonBenet Ramsey,” Billy said. Of course, he was referring back to the time this conspiracy theory went viral in 2016. Katy responded with a nervous chuckle, “umm, wait no, that’s not real!”

This theory got mixed reactions from netizens. Some found it hilarious while some found it in a very bad taste, considering it involved the murder of a 6-year-old. The case is still not solved and is open. Given all the facts, we can deduce that Katy Perry does not have any connection to JonBenet Ramsey. However, we live in a world where weirder things have been conspired. Is Katy Perry being JonBenet Ramsey that unbelievable then?

The Viper Room is a nightclub on the sunset strip of West Hollywood, California. It was opened in 1993 and has been famous in...
Read more

TRIGGER WARNING- Death, Suicide, Murder George Reeves was an American actor born in 1914. In his acting career, he was most notably known for his...
Read more

Seth Rich, 27, was an employee of the Democratic National Committee. He was murdered...
Previous article
Who was the first Man or a woman to walk the earth?
Next article
Did You Know About The 7 Gates of Hell?
Conspiracy theories