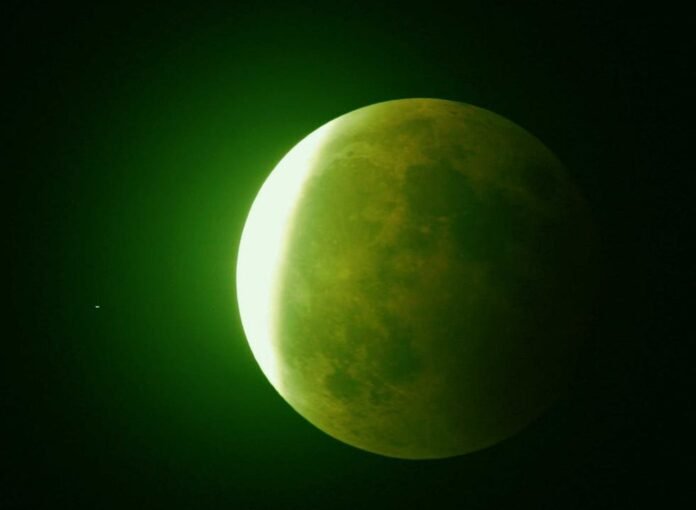 Who looks big and GREEN? The Incredible Hulk! Believe me, I Know. But this time, somebody else has that title. It’s the Moon.

What? Why would the Earth’s moon look green? Is it sick? Funny, but no.

Four years back, this “Green Moon” phenomenon was started as a joke on a couple of Facebook pages. Soon it spread faster than a wildfire, and this was the talk of the town. Every other person on this planet was very eager to watch the moon turn green. Which, according to experts, was not going to happen.

We’ve come across a lot of space and skywatching hoaxes. But this one is really something. I mean, how can it be technically possible?

The moon doesn’t have its own light. The Sun is the brightest source of light in our solar system. The moon shines because it reflects the Sun’s light that falls on it. And on some nights, it looks blood red because of the refraction happening in the atmosphere. It stretches the light waves making it look red. Now, that’s a valid explanation.

But what’s the reason for it to look green? Simple. There’s no reason. The moon doesn’t turn green. It never has, and it never will.

Serious fake news was being spread on social media platforms such as Facebook and Twitter that claimed the moon would appear green on April 20. This phenomenon was called the “Green Moon,” which only occurs every 420 years. This hoax had its reasons to be called that.

What Do Experts Say About The Green Moon?

Various space websites have confirmed that this is a false claim. The Hong Kong Space Museum said that “there is no process in nature that could create a green moon.”

Other sources have also confirmed that there is no scientific reason for the moon to turn green; thus, there will be no Green Moon. The whole Green Moon phenomenon is a hoax.

As for the statement that Uranus affects the moon. It is totally inappropriate. Uranus is far away from the moon, and there’s no way it’s going to leave its orbit and fit itself next to the moon. I mean, anyone in their right mind could make out the distance between the moon and Uranus.

April 20 is seen as a National Weed Day in some cultures, maybe because of its code 420 and its date April 20 – 4/20 (Get it?). But you will not see a green moon unless you are high enough to hallucinate such events.

Another interesting coincidence is that the time period this event occurs in unexpectedly matches the dates. This event was said to occur every 420 years, which also matches the date 4/20 (April 20).

Whoever it is that came up with this must have been pretty clever, or it was just meant to be a joke which took a turn and became serious.

Are people that easy to manipulate or stupid enough to believe before thinking?

A remarkable archaeological discovery in the world took place in 1974 when more than 8000 life-size terracotta warriors were uncovered in Xi’an, China. The...
Read more

If we talk about Jesus and Mary, relationship speculations have always been an integral part of the ancient holy texts and the bible does...
Read more

The Diamond Shipwreck is a story of the misfortunes experienced by one unlucky crew in the Renaissance times. The plethora of inventions and modernization...
Read more

Seth Rich, 27, was an employee of the Democratic National Committee. He was murdered...
Previous article
Is It Strange That Earth Is Going Dark For 2 Weeks?
Next article
The Mysterious Death Of Edgar Allan Poe
Conspiracy theories