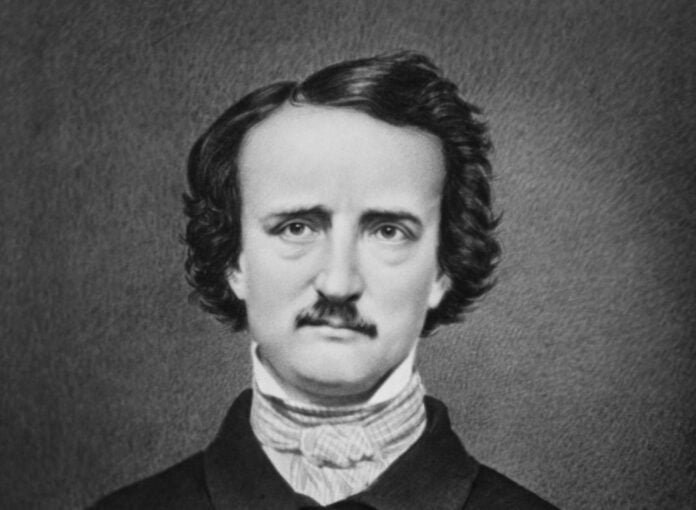 We all know Edgar Allan Poe as the writer of “The Raven” and “The Tell-Tale Heart.” He was born on 19th January 1809 in Boston, America. Over his lifetime of forty years, he wrote many masterpieces in the genre of Mystery and goth, and he even has an award named after him—The Edgar—by the society of mystery writers of America.

But all this acclaim, appreciation, and love that Edgar Allan Poe rightfully gets was not part of his life. Edgar Allan Poe lived a hard life, mostly struggling with finances and family.

His parents died at a young age, and his Foster father took him in. However, he had troubles with him and enlisted for the army to get out, but the foster father paid his way out, and his fiancé left him. He later moved in with his aunt and was engaged to marry her daughter. Around this time, Poe started writing and publishing short stories and poems and got an editorial position. But his marriage with his 13-year old cousin was marked by financial troubles and was not a happy one.

He wrote his famous “The Fall of the House of Usher,” and his “The Raven” was published in the New York Times.

Poe’s life, however, was not happy for long as his wife died at the age of 24. He then had a wild spree related to alcohol, but by 1849, he was sober again. He went back to his first fiancé, and they were to marry after Poe returned after some business in Philadelphia.

The Disappearance Of Edgar Allan Poe

On 27 September, Poe left Richmond by Streamer and stopped in Baltimore. For the next five days, his whereabouts were unknown. He was then found in a gutter outside a bar used as a polling place and to quote the official records—

He was thought to be intoxicated and was put in a cell for that. Poe, however, never recovered to tell what happened to him. On 7th October, Edgar Allan Poe was declared dead. In his last days, he was seen to be hallucinating and talking to spectral and imaginary objects and was utterly drenched in sweat.

His last words were,

The official cause of death was noted to be Phrenitis or brain swelling. As the actual events were never known, there have been multiple theories about the death of Poe.

Edgar Allan Poe died due to an overdose of alcohol.

“It has been documented that after a glass of wine, he was staggering drunk. His sister had the same problem; it seems to be something hereditary.”

-Chris Semtner. The curator of the Poe Museum.

Edgar Allan Poe could not handle alcohol well and had been sober and a member of the Temperance movement. But if he had gone off the wagon, it would explain why he was found in shabby clothes in a gutter in the five days he was gone.

It is believed that the brothers of his fiancé did not want them to marry. When he left for Philadelphia, they might have drugged his alcohol, and given his already low tolerance for it, he was easily beaten up and left in the gutter to die.

Edgar Allan Poe was a victim of Cooping.

Cooping was a violent form of voter fraud, common in those days in Baltimore. Gangs would kidnap people and force them to vote in a variety of disguises.

The polling place was a bar, and people were given a drink after they cast their vote in celebration. It would explain why he was found in a gutter outside of the polling place, where he was probably left drunk and to die, in clothes that were not his own.

Edgar Allan Poe was buried in an unmarked grave two days after his death, but 26 years later, his corpse was exhumed.

The workers who took out the coffin observed a mass rolling around in his skull. They assumed it to be the brain, solidified and hardened. But the soft brain tissue is the first to decay after death. It is more likely to be a tumor calcified after his death. Having a brain tumor would explain his alcohol resistance and his hallucinations toward his end.

All these theories could have been true, all together or even in combinations. It is, indeed, sad to see a great gothic writer live such a hard life and have an even more horrible death.

Crime and punishment are the freakiest lovers, even though their relationship lies upon a cause-effect mechanism. We are well aware of the phrase- you reap...
Read more

Let's dwell into why and how the theory of the death of singer Avril Lavigne came into existence.
Read more

Once Upon a Time, there was an author. He wrote fantastic stories that amuse children even today. He could have been Jack the Ripper. We...
Read more

Seth Rich, 27, was an employee of the Democratic National Committee. He was murdered...
Previous article
The Green Moon: A Cosmic Event Or A Hoax?
Next article
Is CERN Powerful Enough To Destroy The World?
Conspiracy theories