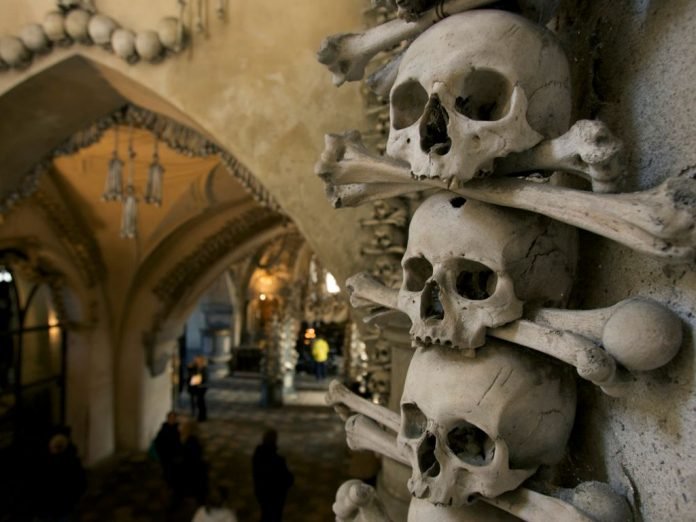 A macabre event was unveiled when walls constructed of human bones and skulls were discovered underneath a Belgium cathedral.

A total of nine walls composed of fragmented human skulls and bones were brought to light by archaeologists while excavating the grounds of Saint Bavo’s Cathedral in Ghent, Belgium, before the construction of a new visitors’ center at the cathedral.

According to Ruben Willaert of Restoration & Archeology/Decoration, the Dutch company that discovered the walls said that the walls were composed of “stacked adult human thigh and shin bones” and that the intermediate areas were loaded with “fragmented human skulls”.

Table of Contents show
The controversial Saint Bavo’s Cathedral at a glance:
Discovery of the bone walls:
The Christian belief in resurrection:
The aftermath

The controversial Saint Bavo’s Cathedral at a glance:

The mystical walls composed of human bones were discovered beneath the north side of the cathedral which was initially known as the Chapel of St. John the Baptist. It was originally a small wooden construction which was consecrated by the Bishop of Tournai and Noyon, Transmarus, in 942 AD. Later, under the influence of Romanesque culture prevailing in Europe, the wooden construction was translated and built into a Gothic-style structure around 1274 AD and between the 14th through 16th centuries, in various installments, a new choir, a nave aisle, decorated chapels, a chapter house, transept expansions, and a tower were added to the renovated religious structure.

The Saint Bavo’s cathedral is most popular for housing Hubert and Jan van Eyck’s Adoration of the Mystic Lamb (also known as the Ghent Altarpiece) which is held to be a masterpiece and an important creation of early Northern Renaissance. Although it has been tagged by some media publications as “the most stolen artwork of all times, it remains one of the greatest masterpieces of Belgium, making it lucrative for researchers’ attention.

Discovery of the bone walls:

After tracing the radiocarbon dates of the bones forming the wall, it indicated that the people had died in the latter half of the 15th century. But the bone walls were held to be constructed in the 17th or early 18th centuries, according to archaeologist Janiek De Gryse who was heading this excavation project. The dating was confirmed by the notes found in historical documents which said that the church’s cemetery was cleared during the first half of the 16th century and post 1784; it was documented saying that the church since then had stopped accepting new cadavers.

According to some bloggers, these big structures were made by the people who, many centuries ago, cleared out an old graveyard to adjust the new bodies, or perhaps during a renovation project. While clearing the churchyard, the skeletons were just not thrown away due to certain religious beliefs, so according to the archaeologists, the bones were used to make the wall, which was a one-of-a-kind invention, and that nothing similar was previously discovered in Belgium.

The Christian belief in resurrection:

The reason as to why the bones were kept and not thrown away was accredited to the Christian belief in the resurrection of their own physical bodies upon the return of their supreme master, Jesus Christ. Further, one’s leg bones are an essential element in the resurrection. To concretize such a belief, large amounts of money were paid to the churches for taking care of the human remains. The belief was so strong that sometimes the wealthy paid for ossuaries (stone houses) within the graveyard walls to house the skulls and the long bones of themselves and their near ones.

Only certain parts of the human body were likely to be held essential for resurrection, the vertebrae bones, ribs, arms, hands, and feet did not find their place in the ossuaries, and curiously, archaeologists haven’t found any such bones in the wall either. The lead archaeologist remarked that they are analyzing the circumstances that caused the construction of the nine bone walls and while the reason might be held to either be religious or spiritual, the reason as to why the smaller bones weren’t included in the wall; the archaeologists are trying to find a clear justification to it.

The walls were discovered during the initial months of 2020, and after the excavations are complete, each wall will be individually taken to the University of Ghent, where they will be examined in detail and documented for further study. The discovery, in the context of thousands of bones being found, is compared to the renowned Catacombs of Paris, France, which holds the relics of more than six million deceased people. Just like the Paris ossuary has been a famous tourist attraction, maybe the walls of Saint Bavo’s cathedral will also be a dark-themed tourist attraction one day, until the myth becomes true and the souls will rise from the dead!

Read interesting theories about the pyramids of Giza!

Is The Government Conducting Experiments That Can Make Warships Disappear? Our governments are quite something. They are doing an incredible lot of things. They govern...
Read more

The controversy around the death of the commander-in-chief of the Polish army and the Prime Minister of the Polish government, in exile, the death...
Read more

One of the most magnificent creations of the world, the RMS Titanic, was the pride and joy of many. However, its untimely destruction in...
Read more

Seth Rich, 27, was an employee of the Democratic National Committee. He was murdered...
Previous article
The Conundrum of the Controversial Lapedo Child
Next article
Eleanor, Countess of Desmond: The Unsung Heroine of Ireland
Conspiracy theories