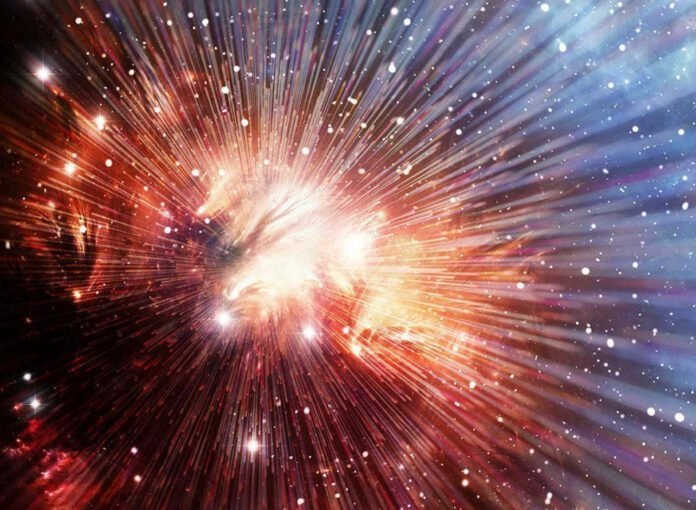 On a clear night sky, you step out and look up to see a million stars gazing back at you. If you pay attention, you may catch a satellite or a space station if you know how to look for one. And if you’re lucky enough, you might stumble across a comet and get some wishes granted. Well, I don’t know, it’s just a burning rock floating about in the atmosphere, not a Genie!

Anyway, if we look closely, we’ll find everything fascinating. It may be the beginning or end of something, from the tiniest particles to massive galaxies or the big bang -that’s the reason for everything that exists today. We know the beginnings of some things for sure, like the birth of a child, a plant, and even the Earth, which was about 5 billion years ago.

But what about everything that’s beyond Earth? Is everything extraterrestrial? Speaking of which, when did the Universe start? What started it? Who designed it? Every story has a “once upon a time.”

So what happened “once upon a time” with the Universe?

Keep reading to know about one of the greatest stories of the scientifically mysterious genesis.

Cosmologists state that nearly 14 billion years ago, the whole Universe was concentrated in an intensely hot and dense point that was smaller than the size of an atom. This point was called the singularity, which later exploded, giving rise to all of the fundamental components of the Universe, such as matter, energy, space, and time.

The Universe expanded a billion kilometers seconds after the bang and started to cool down. Hydrogen and Helium were the first elements to be formed, leading to the formation of almost all the elements in the periodic table, stars, galaxies, and the Universe as we know it is today.

That’s the story we’ve all been told, isn’t it? Yes, it’s just a theory that gave rise to many hypotheses that make us question if this ‘event’ was even real.

The Big Bang Wasn’t Even A Bang!

The Big Bang did not happen the way we think it did. Astrophysicists and theoretical physicists say that the Big Bang could have occurred, but some details haven’t been quite worked out yet.

If the Big Bang were to be an explosion, we couldn’t have possibly heard it as there’s no air for the sound waves to propagate. It was merely the push of massive concentrated energy.

Other theories state that no explosion started everything, but the Universe was expanding into space and, eventually, onto itself.

What Is The Centre Of The Universe?

Every explosion has an ignition point, and if the Big Bang were to be considered an explosion, this would put us in a place where we ask, ‘Where was the center of the explosion?’

These theories make us wonder if the universe even has a center.

The problem the scientists had was that Space looked the same from different directions. And physicists say that the Big Bang didn’t happen at a certain point but happened everywhere, throughout the universe concurrently.

What Happened Before The Big Bang?

A lot of theories were postulated regarding the facts.

This theory suggested that singularity occurred when time didn’t exist and the laws of physics didn’t apply. If time itself was a byproduct of the explosion, then there was no possible ‘before’ if there was no time—a condition where physicists were unsure what might have triggered the Bang.

Other theory suggested that the Big Bang was not necessarily a bang but a Big Bounce. According to this theory, there was already a preexisting Universe which, after years of expanding, collapsed in on itself, forming a black hole that later led to singularity forming our Universe. So as our Universe is expanding now, it might one day collapse, forming another new Universe, which will continue to occur forever.

When two expanding universes collide due to the gravitational pull, they leave a mark leading to a cosmic event such as the Big Bang. As said before, if the laws of physics didn’t exist before the Big Bang, how can this be true?

To be honest, no one knows how gravity actually works to make accurate predictions or assumptions. It’s one of the biggest mysteries of science, or it’s simply beyond human understanding.

All being said, there is no exact and definite explanation as to what might have happened with the Big Bang.

Expansion Of The Universe Hypothesis

Thanks to the technological advancements and high-tech telescopes, Edwin Hubble, yes, the person after whom the Hubble telescope is named, was the one that studied the light that was coming from the galaxies surrounding Milky Way. He discovered that the farther away from the galaxy, the longer the wavelength and redder the light. It turns out as the galaxies were moving away from us, the light seemed redder, and he called it the Redshift.

He proved one of the basic principles of the Big Bang theories. This discovery confirmed the fact that the Universe was expanding, and it still is.

Modern-day scientists are still striving to unravel the mysteries of the cosmos. There’s something that we know and too much that we are yet to learn. One such mystery is that if the Universe is only 13.8 billion years old, how can we see objects that are 46 billion light-years away?

Is it a defect in modern technology or the magically manipulating cosmos?

The only true answer one can give is “I don’t know.” But we can be sure that one day we will have all the answers. All we have to do is, try and understand this universe.

INTRODUCTION We all have seen the Sony Liv web series based on Indian Billionaire Harshad Mehta's life. After seeing that, many, or I must say,...
Read more

DOTA 2: The World of Radiant and Dire

The lore of Dota 2 is vast, mysterious and a theorist’s paradise (or nightmare, depending on how one views sitting in front of a...
Read more

Leonardo da Vinci was an esoteric 15th-century artist and thinker of Italy, whose mysterious...
Previous articleCan The LHC Evoke A Powerful God?
Next articleIs Ong’s Hat The Doorway To Intergalactic Travel?
Conspiracy theories