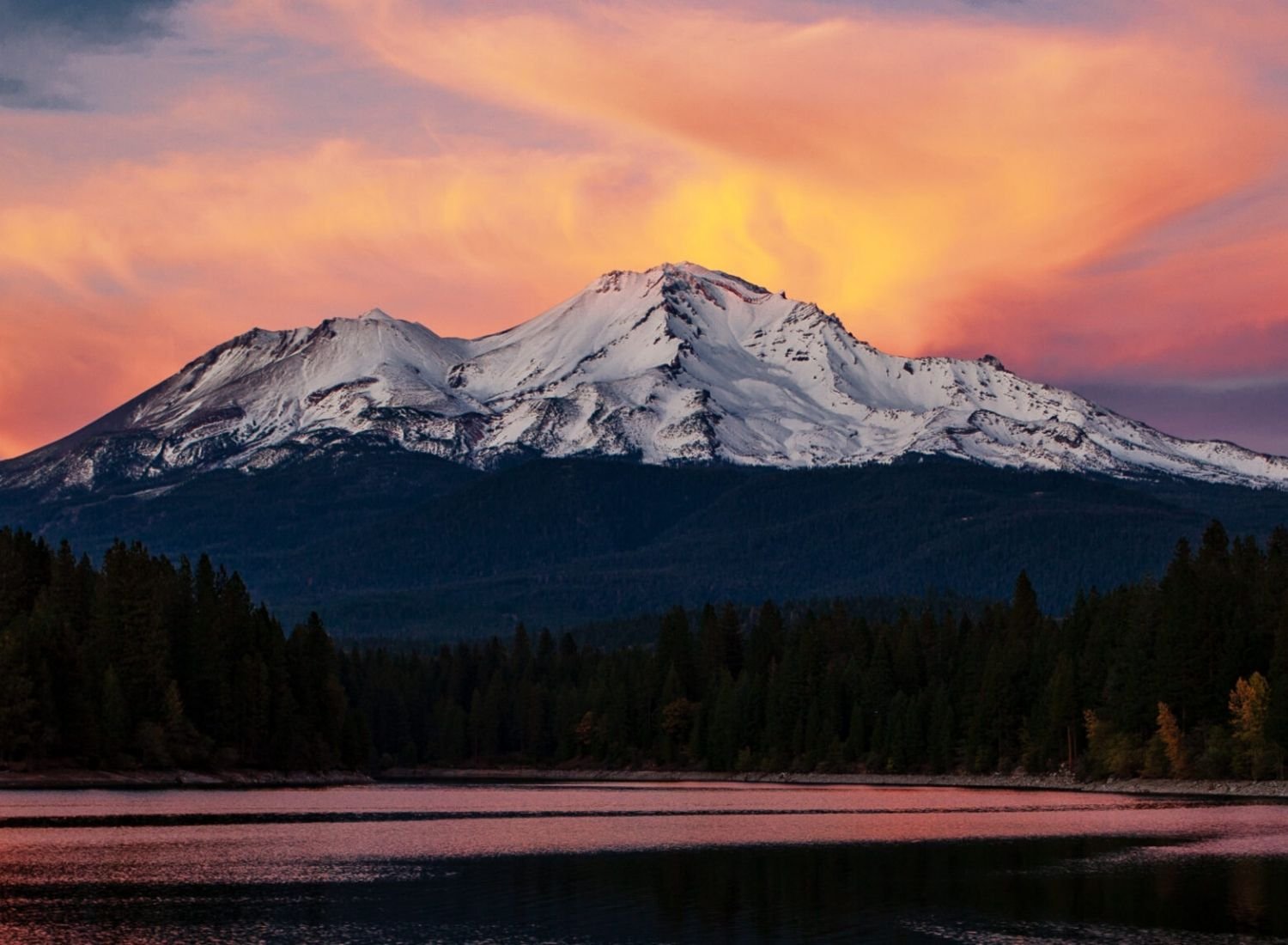 Mount Shasta, holding the distinction of being one of the world’s most eminent sacred mountains is located near the Oregon border in northern California. It is registered as eligible evidence of Native American cultural and cosmological property on the National Register of Historic Places. Artifacts discovered in the surrounding area traditionally suggest at least 11,000 years of human habitation are found in the area, making this region one of the longest-occupied areas of North America.

Mount Shasta can be seen from over 100 miles away (160 km) on a clear blue sky day. The mountain is one of the parts of the thousand-mile-long Cascade Range ranging from northern California to British Columbia, which is one of the largest stratovolcanoes in the world, having an altitude of 14,179 feet (4321 meters). It further combines to be a part of a chain of volcanoes that encompasses the Pacific Basin’s notoriously well known “Ring of Fire,” which is responsible for the majority of the planet’s earthquakes and eruptions.

Table of Contents show
Mount Shasta: Constant threat of volcanic eruptions
An artifact of sacredness
Mythical Significance of the Mountain
Aberrant Energies of the legendary mountain

Geologists view Mount Sasha to be a hazardous site, with dangerous volcanoes having the possibility of eruption likely in this century. Scientists hold that Mount Sasha is already burning, and there are speculations regarding when it will erupt again.

To draw a comparison, a volcanic eruption from Mount Shasta could not exceed the scale of the 1980 eruption of Mount St. Helens. The effects of such eruptions are held to have calamitous effects on the towns close to the base of the mountain, and since volcanoes stay active for years after an eruption, the adjoining regions may have to be closed off to the public for a very long time in order to sideline the hazardous effects from the eruption.

An artifact of sacredness

Mountains, throughout mankind, have been crafted as a sacred feature of the landscape. It has been so because mountains are among the oldest places of worship on our planet; the myth holding them to be the abode of gods and goddesses. They clearly embark on the earliest religious myths of mankind, and people’s connection to them has been so intimate that many of the world’s oldest monuments, such as the Egyptian and Mayan pyramids, were obviously built in their appearance.

Mount Shasta is viewed by Northwestern California Native American tribes traditionally as being demographically and energetically connected to a wide range of important volcanic landscapes and mountains, extending northwards and southwards of their tribal territories.

An ancient spiritual connection is believed to link all these energetically powerful sites together, which includes Mount Shasta, Lassen Peak, Lava Beds, Medicine Lake Highlands, Crater Lake, and many other lesser-known landmarks in the region.

Evidence and speculations of human occupation surrounding Mount Shasta have been traced to the end of the Ice Age, around 11,000 years ago, signifying this area of northern California to be one of the oldest inhabited regions in North America. Recent anthropological discoveries suggest that substantial traces of human occupation can be found along the northern California-Nevada border, going as far back as 14,000 years ago.

Mythical Significance of the Mountain

Mount Shasta’s enormous antiquity and mythic relevance can be placed at par with other similar sacred sites from various ancient civilizations such as the temples and pyramids of Egypt, Stonehenge, the Mayan pyramids, and Machu Picchu.

From the spiritual standpoint of the philosophers, Mount Shasta remains the most powerful creation by the Almighty which is almost half a billion years old. In an abstract geological sense, Mount Shasta is still under the process of construction and will continuously regenerate and change its form in the coming future.

Mount Shasta has been attached to a sacred sentiment by the Native Americans, and it has been the scene from time immemorial. They regard the erection and its surroundings to be a holy place and consider this to be the introductory earthly creation by God. The “tree line” in the mountain remains the extreme point to which any human can visit; beyond this line, the region is held to be too powerful for the human soul to inhabit or travel further. According to legends, this area is inhabited by dangerous spirits who take up the life of people traveling up the mountain unprepared.

The significance of the mountain as a sacred place for the non-indigenous people began around the 19th century. A number of tangible and intangible qualities make a place sacred, and some qualities even go beyond the appearance. Mount Shasta remains the most legendary mountain in the West. A mountain held to be sacred usually possesses unusual characteristics which are more than just the accumulation of the powers exhibited by nature. These characteristics make the mountain a mysterious topic for discussion, thereby attracting a large number of tourists each year.

Aberrant Energies of the legendary mountain

The experts hold that these “sacred sited” around the world which are an abode to the various mysterious phenomena, influence the consciousnesses of living animals in a number of unusual ways. These sites have been colloquially come to be known as ancient “power spots,” places where people commonly experience remarkable otherworldly dimensional phenomena which are often beyond comprehension.

Mount Shasta remains a similar sacred mysterical spot whose riddles from the past continue to challenge human comprehension in the modern era.

There are a number of unexplained mysteries attached to the place. According to some legends, a three-year-old boy disappeared within seconds among the valleys and he was not found until 5 hours. He said an unusual story that a robot lookalike of his grandmother took him and kept him in her cave for 5hours. There are various other myths of people or trekkers being abducted by a lady and taken to her cave; having the resemblance of alien creatures; some terming the figure as an incarnation of a Hindu god.

Similarly, some believe a number of tunnels are situated in the region that connects southern Oregon, Mount Shasta, and the upper coasts of California and southern Oregon. Tribals in the area believe that the locations and entrances of these tunnels are a closely guarded secret that has never been brought to light.

The region surrounding the mountain consists of thousands of unexplored caves, which further adds to the mystery. It is also said that Mount Shasta hides a secret city behind its tall peaks.

In the 16th century, King Henry VIII was desperate to acquire a male heir who would rule the country after him. Sadly, his first...
Read more

The Stanley Hotel, is an architecturally beautiful hotel located in Estes Park, Colorado, United States. It is surrounded by mountains and greenery and is...
Read more