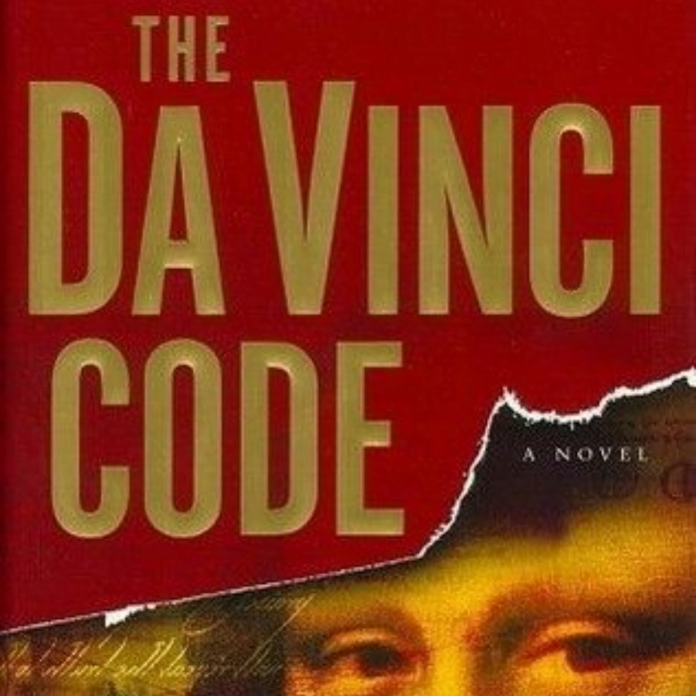 Conspiracy lovers can never get enough of the phenomenal bestseller, ‘The Da Vinci Code’ by Dan Brown, combining historical timelines of events with fictional facts and revealing more questions than answers about faith, religion and history. Opening the novel in the most controversial setting of a dead man, murdered under the preparatory gaze of the Mona Lisa, Dan Brown had already set the bar high for his protagonist Robert Langdon, who unravels this murder mystery through religious symbols and art.

Restyling the medieval legend of The Holy Grail, for a public that often gorges itself on a diet of theological thrillers and fantasy, he introduces a strange alternative theory for our understanding of the Holy Grail legend. The provocative claim by Dan Brown to its readers, “All descriptions of artwork, architecture, documents, and secret rituals in this novel are accurate” makes the theories of The Da Vinci Code too well scripted and documented to overlook.

The Da Vinci Code heralds an utterly unpredictable twist of claiming that the Holy Grail is in fact Mary Magdalene, Christ’s wife and the carrier of his royal bloodline, extended even in contemporary times. Hold on to your screens because the mystery deepens as we unravel the quest of symbols and art to support this theory.

Table of Contents show
THE ORIGIN OF THE HOLY GRAIL
THE PROTECTORS OF THE GRAIL
SECRETS IN THE WORKS OF LEONARDO DA VINCI
MARY MAGDALENE, A SINNER OR WIFE?
THE GREATEST COVER-UP BY THE CATHOLIC CHURCH
THE QUEST OF THE LOST GRAIL

THE ORIGIN OF THE HOLY GRAIL

The search for the ‘Sang Real’ documents, translated to the search of the ‘Holy Grail’ has been misinterpreted for many years. Tales of the Holy Grail or “Sang real” as it is known in French, originated in and around France around the age of the Crusades in 12th Century AD. This has been often twisted into perception as “sangreal” (Holy Grail) instead of the “sang real” (royal blood).

According to the Christian traditions, the Holy Grail was the cup used by Jesus Christ during the last supper. It is also said that the Grail had the blood of Jesus Christ, which bled when he was crucified. This chalice is unraveled to us in the form of Mary Magdalene, Christ’s wife who carries the bloodline of Jesus in her womb. Mary’s offspring has been given many identities, but the one accepted in the book is the female child going by the name of “Sarah” (meaning princess in Hebrew) born as the heir to Christ’s kingdom on Earth.

Thus began a pure royal bloodline that led to the Merovingian dynasty, a succession of kings who ruled what is today France from 481 to 751. Many more accounts of this gene pool are found in other books and documents, where Laurence Gardener writes in, ‘Bloodline of the Holy Grail: The Hidden Lineage of Jesus Revealed,’ about the legends which have arisen in Kashmir and Japan of Jesus escaping to Asia and carrying his bloodline there.

THE PROTECTORS OF THE GRAIL

The Priory of Sion emerged as the protectors of the bloodline of Jesus and the genealogy of his descent, also known as the Knights Templar in historical Hebrew documents. The guards protect the Holy Grail, which supports the Sangreal Documents and the proof of Jesus’ and Mary’s relationship, rather than a gold-laden cup or vessel.

Templar Knights had among them some of the most famous people in its fold, including Isaac Newton, Victor Hugo and our very own Leonardo Da Vinci in its league of past ‘Grand Masters.’ These grand masters of the Sion had been particularly educated and talented in terms of art, music and culture, similar to the influence of the Illuminati. Finding the affiliation of Da Vinci with the Priory of Sion while studying art history in Seville, Dan Brown brings the accuracy of numerous assertions and facts in the novel about his paintings. Brown’s fascination with Leonardo Da Vinci is evident in his previous book Angels and Demons too, where he prescribes hidden meanings in the Mona Lisa.

SECRETS IN THE WORKS OF LEONARDO DA VINCI

Renaissance’s masterwork, ‘The Last Supper’ by Leonardo Da Vinci plays a key role in The Da Vinci Code. One of the most obvious symbolic figures is that of St. John sitting on the extreme left of Christ at the table. Shown throughout as an effeminate character in the different versions of the Last Supper, the identity of the apostle remains an enigma. The interpretation of the symbol ‘V’ made in between the spacial distance of St. John and Christ is that of a chalice and a female. The vessel or the Grail then becomes an archetypal symbol for the women. Moreover, the overarching ‘M’ blanketing Christ and St. John almost seems to spell out the initials of Mary Magdalene.

Dan Brown and art curators alike, mediate further into various paintings of the world acclaimed artist to find clues and symbols guiding us to the truth. ‘The Adoration of the Magi’ is packed with hidden figures and symbols and raises some of the same questions. The Lotus Temple hidden among layers of lampblack and watery glue, visible to us now by state-of-the-art-technology shows the pagan worship of divine female energy.

Which brings us to the question of what exactly did Da Vinci mean by hiding these hidden truths within his paintings? Or is our interpretation just another episode of pareidolia, where the mind believes what it wants to believe?

MARY MAGDALENE, A SINNER OR WIFE?

The lost history of Christianity is presented in the ‘Gnostic Gospels’ where an unorthodox account of the life of Jesus is written and reread. Mary is presented as a prostitute in ‘Luke’s Gospel’ describes Mary as a prostitute and sinner who comes to Jesus for salvation and gets cured of her sins. The apostles were often seen as being jealous of Mary Magdalene in the Gnostic accounts. The ‘Gnostic Gospel of Phillip’ describes the actions of Jesus as he “kissed her often” and referred to Mary as his “companion.” Mary Magdalene stood by Jesus when he was crucified, anointed his body for burial and witnessed his resurrection.

The idea of the ‘Holy Grail’ was a concept to celebrate courtly love between these two and the divine feminine. The tantalizing presence of the Gnostic gospels and ancient texts like the ‘Hammadi’ Egypt 1945 and the ‘Dead Sea Scrolls 1950’ elevates Mary Magdalene to a celebrated religion of female wisdom and sexuality and fuels the various theories about the Holy Grail. Michael Baigent, Richard Leigh’s and Henry Lincoln’s, ‘Holy Blood, Holy Grail’ on which Brown draws heavily, is a similar book which tries to reframe the idea of the Holy Grail.

Darrell L. Block, a professor of New Testament studying at Dallas Theological Seminary, sees “The Da Vinci Code” not merely as an effort to undermine traditional Christian belief but also to “redefine Christianity and the history of Christianity.” But this genealogy, even under protection, has been obscured and regarded non-existential for centuries. A vast majority of The New Testament and early Christian scholars find such a claim to be historically unreliable.

THE GREATEST COVER-UP BY THE CATHOLIC CHURCH

The idea of a Christ’s equal, mother of his child, did not appease the hierarchical and patriarchal structure of the Church. This view is often troubling for the Catholic Church, not so much by other sects who already think of Jesus and Mary Magdalene’s relationship perfectly sacrilegious.

Mary Magdalene, her girl child and femininity were a threat to other male disciples, kings and priests of those times. A conspiracy was hacked by the Church to bury the true nature of their true relationship. At this point, there emerged a clandestine, Vatican-sanctioned Catholic sect, believed to have existed to seize the Priory’s secret, or the Sangreal Documents, thereby completely wiping off the evidence.

The patriarchal Church preferred visualizing Jesus as celibate, thus enabling their long documented history of trying to crush the whole feminine pagan side and deny priesthood to women. Even as most of the truth is lost in antiquity, it is as clear as vision, which stares at us and mocks us in the face. Laced with passages full of pagan forms of worship and Catholic sects following self-harm purging practices, Dan Brown misses no opportunity to provide an innocent attack on the Catholic or ‘The Vatican’ (interchangeably used in his theological thrillers) and mocking its authority.

The other point of distinction is made by the presence of Mother Mary, the Virgin Mother, kept on a podium of accepted and pure motherhood in Christian ideals and Mary Magdalene painted in an image of a sinner and a prostitute by the Catholic sects. Sylvia Browne in her book, ‘The Two Mary’s: The Hidden History of the Mother and Wife of Jesus,’ shows apprehension against the divine of Christianity of a virgin-born son, being a God’s Child along with fulfilling the role of husband and father on Earth.

THE QUEST OF THE LOST GRAIL

The Legend of the Holy Grail was written to conceal secrets that could ‘devastate the very foundation’ of Christianity and something way beyond what fragile humanity can handle. The presence of the Grail is perhaps to restore the spiritual incompleteness of the soul and establish man’s feeble attempt to feel closer to God and the truth about his creation. Emerging as a symbol of his sacrifice, the symbolism of the Grail is translated into a vessel that offers completion and perfection to spiritually fractured humanity. That was the Grail quest. The search of the ‘Holy Grail’ will continue as human greed and power strive further, remaining uncontained within the pages of a novel.

It's been a while since several people, and conspiracy theorists are hell-bent on the idea of the existence of a cure for cancer and...
Read more

Seth Rich, 27, was an employee of the Democratic National Committee. He was murdered...
Previous article
The Reptilian Elite
Next article
How Many Revolutions has Lorde Taken Around the Sun?
Conspiracy theories