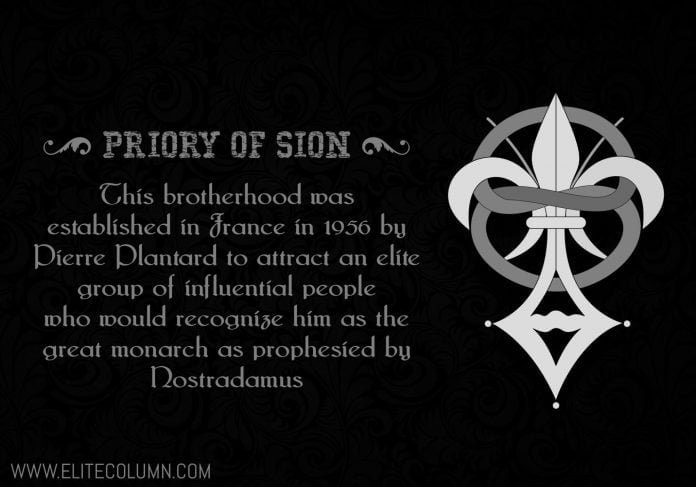 Priori of Sion- A lot of people in the world like to see more than what meets the normal human eye or should I say that the things that are there in the periphery and are not paid much attention to. Once attention is drawn to these peripheral things, they become not only of extreme importance but also of extreme interest. One such thing that has been brought into focus by the “conspiracy theorists” is the notion that the world is controlled by a number of secret societies that have existed for a very long time, one of them is Priori of Sion.

They believe that these societies have a very large impact on our day to day lives without us realising it.
We are all familiar with Illuminati, Freemasons and its likes. One such secret society the conspiracy theorists believe is the Priori of Sion. This belief is very controversial because it involves religion and therefore it has been debunked several times over the years. The theorists believe that this society holds and protects a subversive secret of the Christian religion.

Table of Contents show
1 Origins of Priori of Sion.
2 Influence
3 The Members of this Secret Society
4 Conclusion
5 Leave your vote

Origins of Priori of Sion.

It is believed that this supposed secret society was found by Godfrey of Bouillon on Mount Zion in the Kingdom of Jerusalem in 1099. This society was finally legally established in France in 1956 by Pierre Plantard. It became particularly popular in 1982 with the publication of the book The Holy Blood and the Holy Grail by British journalists Michael Baigent, Richard Leigh, and Henry Lincoln.

It was inspired by a story that revolves around Father Berenger Sauniere, a priest from Rennes-le-Chateau, a small village in the French region of Aude. This rather strange and controversial person who paid a lot of attention to symbolism is also seen as a character in the Dan Brown book Da Vinci Code. The story says that the priest had an affair and believed that there was hidden treasure in Rennes-le-Chateau which he started digging in the night to excavate it. These were both perhaps, sinful activities and against the rules of the Catholic Church.

It was found out by the head Bishop and Sauniere was suspended from all his services. The stories, however, continued to spread even after the priest’s death in 1917. They became extremely popular when Pierre Plantard in 1956 started telling the story with added details.

He declared that the treasure in Rennes-le-Chateau was actually discovered and with it were found some documents confirming the old Southern French legends that Jesus Christ, instead of ascending to Heaven, had come to live in France with his wife, Mary Magdelene. He also said the children of this divine couple eventually came to be known as the dynasty of the Merovingian Kings of France and the ‘holy blood’ of Jesus Christ continued to flow in their veins.

If Plantard’s tale would have been believed by the masses, it would have changed world history. However, it was of course rejected by the Church authorities and by the historians alike. This didn’t stop the popular culture from adapting these tales into TV shows, movies, and books so much so that by the 1970s, Rennes-le-Chateau had become a household name in Britain.

The Priori of Sion was officially and formally dissolved in October of 1956 to control the havoc the Plantard had caused. Those who continued to believe in this story allegedly continued the secret society of Priory of Sion. It was also believed that the “secret documents” that Plantard had talked about resurfaced in the National Library of Paris in 1975 but the historians disregarded them as nothing more than 20th-century fabrication.

The Members of this Secret Society

As mentioned earlier, those who believed in Plantard’s story were members of the Priory of Sion. According to Dan Brown’s Da Vinci Code, the documents known as Les Dossiers Secrets discovered in the National Library of Paris in 1975 identified numerous members of the Priory of Sion including Sir Issac Newton, Sandro Botticelli, Victor Hugo, and Leonardo da Vinci. Others like Jean Cocteau, Robert Fludd, Nicolas Flamel, Robert Boyle and more are also suspected to be part of this secret society.

There are of course those that believe that all this is nothing but a hoax. Strangely, there also exist those who believe that the hoax itself is significant. They suggest behind this hoax is a network of European esoteric societies whose goal is a single, centralized European state. Over the course of the years, this conspiracy theory has been debunked as absolute fraud which makes us think that why would it have even started in the first place.

Also, what becomes important is that there is this same kind of information from unrelated sources. Now whether we decide to look at the ‘in focus’ truths or also pay attention to the peripheral ideas depends on us.

What Is Aum Shinrikyo?

The group Aum Shinrikyo—now renamed Aleph—is a cult terrorist organization based in Japan and...

‘To Kill a Mocking Bird’ is one of the most celebrated books in the...

Louis Tomlinson is an English singer and the face of the former boyband, One...
Previous articleSandy Hook Elementary School shooting.
Next articleChildhood Cartoons – When They Got Dark
© Conspiracy Theories