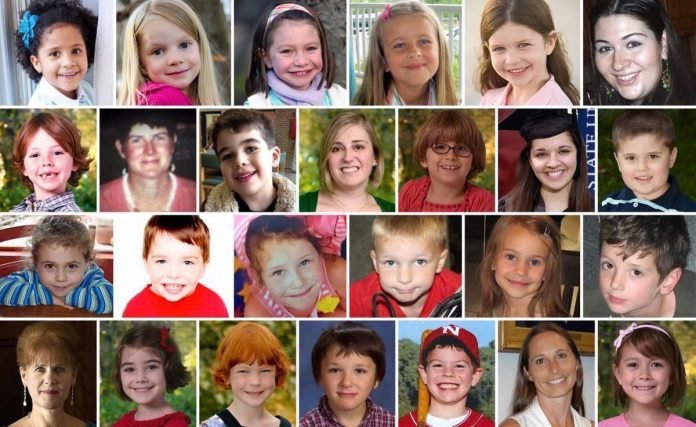 The fourth-deadliest mass shooting by a single person in US history, it occurred on 14 December 2012, in Connecticut, the United States when 20 year old Adam Lanza shot and killed 26 people, including 20 children and six adult staff members. Before killing the people in school, he had killed his mother at their Newton home.

As soon as a crowd started gathering near the school, he shot himself in the head. The incident gave rise to debates on gun control in the United States including proposals to make background-check system universal and new federal and state gun legislation banning the sale and manufacturing of certain types of semi-automatic firearms and magazines with more than ten rounds of ammunition.

Lanza acted alone, but there is no substantial evidence as to why he carried out the attack. A report issued by Office of Child Advocate in November 2014, stated that Lanza was suffering from Asperger’s syndrome and suffered from depression, anxiety, and Obsessive-compulsive disorder, but it is not clear if either is the cause for the attack. His deteriorating mental health along with a violent streak and access to deadly weapons provided a recipe for this mass destruction.

Table of Contents show
The beginning of the shooting followed by destruction :
Lives lost and saved :
The aftermath :
Insight into Adam Lanza’s life :

The beginning of the shooting followed by destruction :

Around 9:30 hours, Adam shot his mother, Nancy Lanza aged 52 at their Newton house. Police on investigation found her lying in her pyjamas with four gunshot wounds to her head. Adam then used his mother’s car to reach the school.  Around 9:35 hours, using his mother’s Bushmaster XM15-E2S rifle and ten magazines with ten rounds each, Lanza locked front entrances of the school.

The initial shots were heard on the school intercom system which was being used for morning announcements. The principal was meeting his faculty then and did not recognize the gun shoots. It was Hochsprung (the principal), Sherlach and lead teacher Natalie Hammond, who encountered Lanza and tried to stop him, along with alerting the other members nearby. Lanza killed Hochsprung and Sherlach. Hammond was shot in the leg, but she dragged herself to the conference room and pressed her body against the door. She was given medical treatment later on, at Danbury Hospital. Meanwhile, Janitor Rick Thorpe ran across the corridors alerting all classrooms.

As students across the various floors took shelter along with their teachers, Adam Lanza took a round of inspection filled with rage caused by unknown factors. The school nurse, Sarah Cox hid under her desk and witnessed Adam enter her room, look around for a while and leave. It was her closest brush with death.

Lanza entered a first-grade classroom, where the substitute teacher Lauren Rousseau had herded her students towards the back of the room and was trying to hide them in a washroom. A six-year-old girl was the lone survivor of the attack on first grade who made it through by playing dead.

Lanza entered another classroom and shot a child who was hiding underneath his desk, various contradictory reports from this point onward, where some believe that Lanza fatally shot the children while they were trying to escape whereas other reports say that Lanza allowed one of the six survivors to escape for his life. Many of the students who escaped past this madman claim to have found ways while his weapon was jammed.

Several teachers successfully saved their students lives along with their own. The students were hidden in various parts of the school and we may call it their sheer will of good luck that Adam Lanza ignored these spots, which included Library lockdowns, classroom windows and doors covered with chart papers, and other less visible spots. Rousseau, Rachel D’ Avino (a behavioral therapist) and fifteen students were shot dead by Adam Lanza.

Lanza was found to have shot fifteen bullets out of a magazine for thirty bullets, which led the police to believe that he reloaded several times. The total numbers of victims were eight boys, twelve girls, all aged between six to seven-year-olds, 6 adult teachers. His Glock was found jammed and a rifle was found several feet away from his body.

The police claim to have received the first tip-off at around 09:35 hours and arrived at the crime scene at about 09:39 hours. The police mobilized local police dog and police tactical units, a bomb squad and a state police helicopter. The wounded patients were evacuated towards the hospital where two children were later declared dead and a child was termed unidentified.

No suicide note was found on the spot or any evidence that could possibly point towards the reason for committing this brutal crime. The documents of the investigation showed that 156 shots were fired, 154 shots were from the rifle and two from the pistol. He killed himself with the pistol.

An investigation into Lanza’s body eliminated all possibilities of drugs or medication. No alcohol or drugs were found in his system, and the evidence for tumors or gross brain deformities are also ruled out. Lanza’ search history showed an intensive search history on the 2011 Norway attacks and 2006 west nickel mines school shooting. He had also downloaded videos relating to the Columbine High School massacre and created a spreadsheet listing around 500 mass murderers and the weapons they used. A photograph of Lanza holding a gun to his head was also retrieved from his room.

His mental behavior analysis showed him as anti-social; and made him distant even from the people he should have been close with. His teachers reported his obsession with writing about battles, war, and destruction.

It will always remain an unsolved mystery as to why Adam shot 26 innocents and his own mother following which he took his own life. it could be a simple case of mental instability but the investigators and psychoanalysts feel there is a deeper end to all this to tie it up. One never knows what triggers the others though, do we?

The Popish Plot Conspiracy and its Impact

The fabricated plot of lies which gripped all of England, Scotland in the anti-Catholic hysteria was alleged to be the brainchild of Titus Oates,...
Read more

Seth Rich, 27, was an employee of the Democratic National Committee. He was murdered...
Previous article
Mercy Brown a Vampire in 19th Century?
Next article
The Secret of the Priori of Sion.
Conspiracy theories