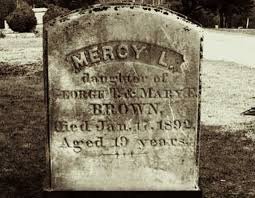 During 19th Century in New England, there was an outbreak of tuberculosis known as “Consumption” through Rhode Island and other parts of the country.The people of New England called in ‘The Vampire Panic’. The most famous case was of the Brown Family and their 19- year daughter Mercy Brown. This incident occurred in 1892 when Mercy died from the disease.

Since there was no known cure or reliable treatment for it at that time. The small town of Exter, Rhode Island befell to terror surrounding to this deadly disease.

A farmer named George Brown lost his wife, Mary Eliza, to this disease in 1884. Two years later tragic hit the family again when his oldest daughter died of the same illness.

The rest of the family seemed to be in a good health until his son, Edwin, became seriously ill in 1891 and was taken to Colorado Springs in the hopes that he would recover in a better climate. However, a year later he returned to Exter in an even wore state. But negativity never seemed to leave the family, the same year his sister, Mercy Lena, died from tuberculosis.

With his son deteriorating rapidly, George began to grow desperate and turned to an old folk tale. The tale mentioned that “some unexplained and unreasonable way in some part of the deceased relative’s body live flesh and blood might be found, which is supposed to feed on the living that are in feeble health”. What this means is when members of the same family waste away from consumption, it could be because one of the deceased is draining the life force of their living relatives.

On 17th March, 1892, a doctor and some locals dug out the bodies of each family member who had died because of the illness. They found skeletons in the graves of Brown’s wife and eldest daughter.

Somehow, the doctor found out that the nine-week-old remains of Mercy Brown looked startlingly normal and not at all decayed. To add to the mystery, blood was found in her heart and liver. This all seemed to confirm local fears that Mercy Brown was some kind of vampire who had been sucking the life from her living relatives.

The doctor assured to those present that Mercy Brown’s preserved state was not unusual, particularly because she was buried in the cold winter months. Before she was reburied the superstitious locals removed her heart and liver ritualistically and were later burned.

The ashes of her body parts were later then mixed with water and fed to Edwin. Sadly this supernatural cure did not work on Edwin as people had hoped and he died a mere two months later.

Such practices of digging up and burning the deceased over fears of vampire-like creatures were common in many Western countries until early 20th Century. But the exhumation of Mercy Brown came at the end of an era for those vampire-inspired rituals.

On based of these real events even a novel was published by Sarah.L. Thomas named – Mercy: The Last New England Vampire. The novel also revolves around the mystery of Mercy Brown.

Though science has been working hard on finding the reason for her body to blood flowing after she was buried it is still a mystery that no one could solve.

How did Bruce Lee die?