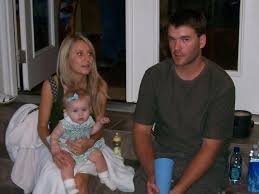 In 2008, Kadie Major, who was married, was found dead alongside a section of railroad tracks. Her little daughter was found floating motionless in a pond almost 50 to 100 feet away. At that time the investigating officer was Rick Ollic. Ollic believed it was a murder-suicide and says a note was found in Kadie’s pocket was a piece of compelling evidence showing that she was in depression and delusional at that time.

Kadie’s family never believed that she was a victim of depression and was delusional at the time of her death, that she would take the life of her little baby and kill herself

Kaddie’s mother Vicky Hall and the detective were interviewed. Where the detective said that it was murder-suicide. Kadie’s mother disagrees to this and says that the sheriff’s department has been avoiding her. Her family later hired a private investigator, Jessica Sanders, who also believes Kadie did not step in front of the train and thinks that Kadie’s husband Aaron Major killed Kadie and her daughter River Lynn.

After pursuing the sheriff for 10 years the case reopened in September 2018. Sheriff Duane Lewis said there are multiple persons of interest including Kadie’s husband. Though there were no reason for her husband to also kill her. But no one has an idea why the 5 month pregnant mother would kill her unborn kid and her girl child.

No leads, no new suspects this case is as cold as ice. No new theories related with her death could be found. No one knows what really happened with her or who is behind the murders.

The tales about human experimentation and torture but people need to dismiss these ideas to a very large extent. Sometimes, however, there is a...
Read more

Seth Rich, 27, was an employee of the Democratic National Committee. He was murdered...
Previous article
The Mystery of the 8 Day Bride, Christina.
Next article
Mercy Brown a Vampire in 19th Century?
Conspiracy theories