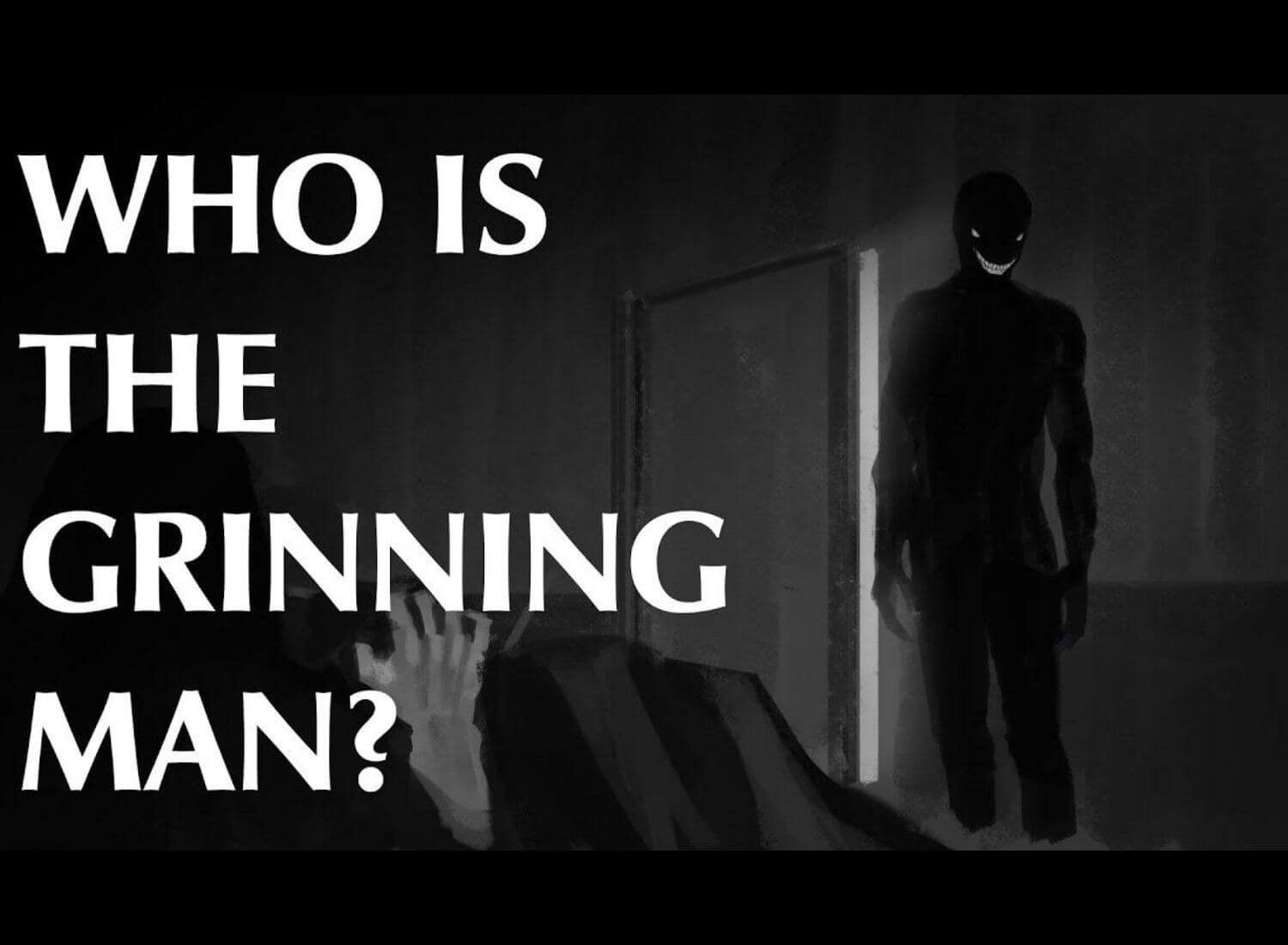 Alien? A psychopath? Men in black? Or just our imagination? What is the mystery of the Grinning Man who scares people at night and is known by many other names?

Let’s think of our childhood when we were filled with imagination, creativity. When daylight brought us new hope and happiness, darkness at night brought us fear; when we used to trust everything we saw; when every day was a new adventure for us; when we grew up hearing stories about a bogeyman in our town which was used to feast upon the blood of young kids; the stories which were told to us as a kid diminished after a certain time as well as our fear. We became more practical and logical as we grew up. How can we be so sure that there is no such thing as monsters? How can we believe without any evidence?

Every year, from different parts of the world, people report different types of monsters they saw like Aliens, Bigfoot, Grinning Men, Men in black, Lizardman, Mothman, and the list goes on, and how can we still believe that there is no such thing as monsters?

The Grinning Man is the most frightening entity a person could have ever bump into, not like any other monster who was supposed to hide in the dark. The Grinning Man entered people’s homes at night and watched them while they slept. The Grinning Man is said to be 7-feet tall with a muscular physique, small beady eyes unnaturally wide apart with a shallow nose, and he wears a tight-fitted suit. The most disturbing thing of his face was his wide, creepy smile.

First Encounter With “The Creepy Man”

The first-ever encounter with the Grinning Man was recorded in Elizabeth, New Jersey on 11th October 1966. Two boys by the names of Martin Munov and James Yanchitis were walking home from a movie theater.

They were walking beneath the New Jersey Turnpike. After dark, it was not a safe place for two boys. They must have been terrified walking through a dark tunnel, with traffic pounding 30 feet over their head.

Earlier that evening, they had heard that a woman was being followed by a man wearing a green suit. They reached the other side of the Turnpike when  James noticed someone standing in the bushes behind the chain-link fence. He said to Martin, who’s that?

They saw a muscular 7-feet man with a creepy smile standing behind the chain link fence wearing a green suit, and his attention was on the house across the street. That man was focusing on the house and nowhere else. He didn’t even notice those boys for a few minutes and then turned his face towards the boys.

The boys described that man as creepy and his facial features as inhuman, grinning behind their back as they ran away from him.

John Keel, a famous ufologist and an author, was in that area shortly after the encounter. Investigating the location as a UFO was seen there. After he heard the boys’ story, he interviewed both of them separately. Both of them gave him the same description of the creepy man and told him the same location where the man was standing.

A UFO was also seen that evening. Maybe the creepy man was an alien that got lost? Or maybe came with some other intentions?

Second Encounter With “The Creepy Man”

Woodrow Derenberger encountered another creepy man within three weeks from the last encounter. On the 2nd of November, he was driving near West Virginia when a UFO dropped in front of him and stopped his car. A man came out of the UFO with the same facial features and muscular body wearing a ‘Blue reflective suit’ this time. He went near the car and communicated telepathically about lights on the horizon without realizing that the lights were coming from a distant town.

The weird man told him that his name is Indrid Cold. Cold asked him many other questions about the people and surrounding areas, then thanked him and left in the strange craft. This encounter occurred two weeks ago in the famous Mothman case, which occurred in Point Pleasant, West Virginia, and everyone started linking both the cases. The Grinning Man was also seen on the outskirts of Point Pleasant, West Virginia, when the Mothman case was in its heights. Maybe that man was collecting information and giving it to the Mothman?

What Does The Grinning Man Want?

A family started experiencing unusual activities in their home without any reason. Things were moving from their places, and objects thrown from shelves, doors slammed at night. Wasn’t it creepy? Was the Grinning Man behind all of this who wanted to scare people for a reason?

On 14 December 1966, around 2:00 A.M, the youngest daughter Linda experienced a terrifying activity. Linda ran towards her parents’ room as she was terrified. She told her parents that she woke up as her door opened and saw a muscular, tall man standing in front of her.

She wasn’t able to see his face but saw his creepy grin. He walked towards her bed and stood right over her. She screamed and hid under the covers. When she looked back, he was gone. Linda refused to sleep in her room after that incident. Linda’s family stopped experiencing any other creepy activities at their home after that incident.

Another couple who experienced something creepy was Mary Elizabeth McRae and her husband, Alan. The couple lived in the outskirts of Dunkeld in a village near Cairngorms National Park, Scotland. The couple was in their mid-fifties, and their house was in a remote area. The closest neighbor lived almost a mile away.

On 23rd November, Mary and her husband Alan went to sleep by 9:00 pm. Mary reported that she woke up in the early hours of the morning by some strange clicking sound and found herself lying on her front, wholly paralyzed and unable to breathe. Something like this never happened to her before, so she completely panicked; disorder like this wasn’t identified during the 1970s. The strange clicking sound kept on increasing, but something which caught her attention was that she closed her curtains before going into bed, and this was one thing that she did every day before going to bed.

As she was lying on her bed, she saw that the curtains were open. She was terrified and had a feeling that someone was watching her. She was looking at the window thinking about it and saw something staring back at her, a person with dark beady eyes and a creepy grin.

She kept on staring back and wasn’t able to move as she kept on staring, her body lift off the bed and slowly float towards the face. She wanted to scream, but no sound came from her mouth. She didn’t know what happened next as she blacked out, but when she was awake in the morning, she was suffering from a terrible headache that didn’t ease for at least a week. Everyone considered it as a sleep disorder.

Mary passed away in 2013 at the age of 94, but she remembered this disturbing incident until the day she died. Who was the Grinning Man? Or what was he? Did he want to terrorize people and keep an eye on them, or was there something more to it?

Who Is Indrid Cold?

December 1979, Italy. A man named Pier Zanfretto, who has a history of being abducted by reptile aliens, also said that he met the Grinning Man before he was taken to the UFO; he noted that Grinning Man referred to himself as Indrid Cold. Woodrow Derengerger also claimed that Indrid Cold visited many times after his first encounter back in 1966. He also claimed that he bought two more Grinning Men with him, who goes with the name of Demo Hassan and Karl Ardo. Even his wife testified, saying that their plan was something evil. She divorced Woodrow after these encounters.

Some people believe that the Mothman, Indrid Cold, and the Grinning Man are all the same. Some also believed that many encounters were fake, and the descriptions were copied from John Keel’s books, but it is also said that the Grinning Man still visits every year in winter or springs people still report his encounters. Who is he? What he wants from people is still a question for many of us.

Men in Black: are they real?

The Flat Earth Society? Why do People think we live on a Plane Surface?

NASA has been showing a steadfast improvement in the field of space technology. Not...
Previous articleThe Royal Treasure Of Jaigarh Fort And Its Conspiracies Unwinding Around Indira Gandhi
Next articleThe Saga Behind The Head Of Oliver Cromwell: Most Remarkable And Controversial Figure
© Newspaper WordPress Theme by TagDiv