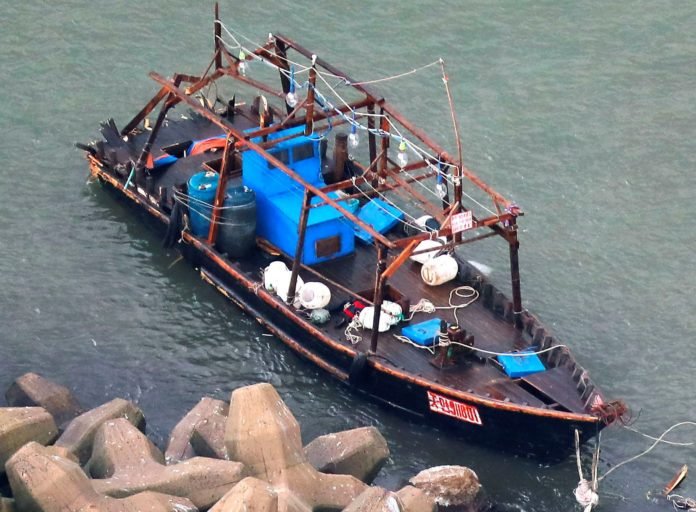 Mysterious “Ghost ships” have been washing up on the banks of western Japan. These ships are thought to be the fishing ships from North Korea. Many of these ships only have dead bodies and skeletons, but in recent years these ships that reached up to the shore have been found with their desperate North Korean crew still alive.

They are called Ghost Ships because these ships are usually found empty or with dead bodies on board off the western coast of Japan. These ships were found by the Coast Guard of Japan first in 2011. Ever since that the numbers have gone up drastically. Only in 2014, the number of ships that were found by the shore was less.

With most of the boats washing up empty or only with dead bodies, it was initially unclear from where these ships came to the coast but after some observers stated that they came from North Korea. Markings on some vessels were indicating that the ships are owned by the North Korean Military, who have a major part in the fishing industry. The crew found alive on the recent ships confirmed that they were the fisherman of North Korea.

When the boats with a corpse wash up on the shore, the Japanese official tries to find out the reason behind the deaths but due to the decomposition, it is often impossible to find the reason. Some researchers stated that the deaths are because of starvation. The reason to state this is that the ships that wash up to the shore are old and heavy which don’t have modern engines and GPS devices to track their way back if they ever get lost, and with the ships being old it is impossible for them to fight the currents in the water.

One of the ships found in November had a plaque which indicated that it belonged to the North Korean Military. Surprisingly there has been no mention of missing vessels from North Korea.

It has also been suspected that these fishermen that wash up on the shore are either spies or defectors. But after some study, these both options have been ruled out. Since taking this dangerous route to cross the Sea of Japan is very risky and since only a few men were rescued alive it is very unlikely of them to be spies sent from North Korea. All the men that were rescued from these ships have been sent back to North Korea.

But why would the fisherman take such a great risk? The one theory is that with the tightening international sanctions of Pyongyang’s nuclear tests, the regime is under to boost agriculture and food supplies, due to which the leaders are demanding big catches and to meet the demands of the fishermen take the risks. Profit-seeking is also said to be the reason for such risks.

The terrifying, life-threatening reptiles are something most of the population is afraid of. These stealthy-looking creatures could possibly suck the life out of you...
Read more

Seth Rich, 27, was an employee of the Democratic National Committee. He was murdered...
Previous article
The Death of Kevin Ives and Don Henry.
Next article
Will dead Nero Rise From The Ashes?
Conspiracy theories