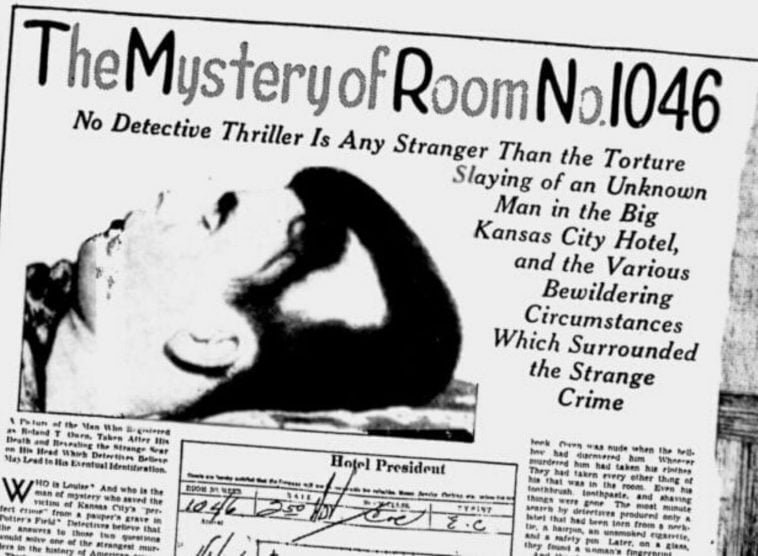 On the night of Wednesday, January 2nd, 1935, a man checked into Hotel President, Kansas, to haunt the walls of Room 1046. The following details revolve around the brutal death of Roland T. Owen, whose identity is as unknown as his killer. To this day, the mystery is still intact within the compounds of the room, and the murder remains unsolved. So what is this mystery about the murder in room 1046?

What Followed Before The Murder?

A man somewhere in his 20’s carrying only his bare necessities checked into Room 1046 hailing from Los Angeles. The man identified himself as Roland T. Owen, a name otherwise ordinary if only we didn’t know better. With blinds tightly drawn and no lights on, the behaviour of this particular male was far from ‘not’ being suspicious. As the night unfolded, the maid, Mary Soptic would let us believe that Mr. Owen had a guest arriving in his room as he had instructed her to not close the door after cleaning. A note which said, ‘Don, I’ll be back within 15 minutes. Wait.’ was seen underneath the only lit lamp in the room.

On January 3rd, when the maid returned to clean the room she saw that the previously unlocked door was now locked, but from the outside. Figuring that Mr. Owen must have gone somewhere she unlocked the door to resume her duties, only to find him sitting in an upright position on his bed with just a lamp-lit beside his stead. While she was cleaning, Soptic heard a phone call between Mr. Owen and the previously mentioned Don, saying that he didn’t want any breakfast.

At this point, we are as curious to know about Don as you are.

On January 4th, 7:00 a.m. the Hotel’s Phone Operator had noticed that the phone of Room 1046 was disconnected. A bellhop, Probes was sent to the room apparently having a ‘Do Not Disturb’ sign on its door. After repeatedly knocking a voice was heard from the inside allowing the bellboy to come in but without turning on any light. But no one unlocked the door to let the bellboy in.

At 8:00 a.m., another bellhop, Harold Pike let himself in the room which was locked from outside. Upon entering, he saw Mr. Owen lying on his bed naked. The phone stand was kicked over and the theory of his intoxication was deduced. Fixing the phone stand, the bellboy left Mr. Owen in his dull lit room.

If this fascination of Mr. Owen with the dark perplexes you, don’t think of it as a satanic ritual site, but as a perfect lair for murder.

At 10:30 a.m, the phone of Room 1046 was again off the hook and the previous bellboy, Probes was sent in to rectify the situation. When no one answered the door, he entered the room with a spare key and witnessed a site full of gore. Mr. Owen was lying on the floor with bleeding open wounds. Room 1046 was covered with splashes of blood on its walls, ceiling, bed, and bathroom.

Even with his injuries, Mr. Owen was somehow miraculously still alive. The detective asked him whether someone was there in the room and he responded, ‘Nobody’ further said that he fell from the bathtub. That was clearly…not the story.

Roland T. Owen was declared dead on January 5th, 1935. He had been strangled with a telephone wire, tortured, stabled multiple times, and had a deep cut on his head which occurred 6 to 7 hours prior to when he was found.

The story only gets creepier from this end.

What Followed After The Murder?

As further investigations were carried on, it was discovered that Roland T. Owen, was an impostor. Moreover, the troubling presence of the man named Don within the story was another identity that was unknown making the plot thicker than it already was.

On March 23rd, Owens’s funeral was also a shady affair when the funeral home received an anonymous tip covering the expenses of his funeral rites, along with a bouquet of thirteen red roses and a note which said, ‘Love Forever, Louise.’ The money and the note were never tracked down as another person was dragged into the list of people who knew about the killing and the real identity of the corpse named Roland T. Owen.

At this point, these questions remained unanswered and would stay so till eternity; who was Roland T. Owen? Who was Don? Who was Louise? Who paid the money for Mr. Owen’s funeral? Why was he killed? And lastly, who killed him?

Till now, the most plausible theory has been that Mr. Owen was murdered by his fiancée’s brother who had caught a sniff of his affairs. Moreover, it had been deduced that it was not a one man’s job as the murder heist revealed the fingerprints of a woman that were found on the phone stand in the room. On the same night, it was reported that a woman had come into the hotel looking for room 1026, which could easily have been mistaken for 1046.

The occupants of Room 1048 heard voices of a man and women from 1046 and it was taken into question whether this was the same woman who had come searching for a man in room 1026. As investigations were carried on into the anonymous tip for Owen’s funeral, it was discovered that a woman had called and specifically asked him to be buried in the Memorial Park Cemetery so that he will be buried near her sister. A man was also heard later say that ‘Cheater’s usually get what’s coming to them,’ and that he is doing this for his sister.

All these discoveries point out to a murder carried on by the purpose of revenge and anger due to the vicious circle of infidelity committed by Roland T. Owen.

But what was more shocking would be the revelation of the identity of the supposedly dead man we had been talking about. In 1936, a woman named Ruby Ogletree identified the dead Mr. Roland T. Owen as her son, Artemus Ogletree, who left Birmingham in 1934. This truth was a sudden catastrophe to the mother and the authorities as Mrs. Ruby Ogletree had been receiving letters from her son even after he was declared dead a year before. Even though the content of these letters would be typewritten it was reported by Ruby that the language was not something that her son, Artemus would use.

The last piece of the puzzle which will forever tilt this mystery would lie with Dr. John Horner, who was writing an exhaustive account of the murder in Room 1046, when he received an anonymous call about Artemus Ogletree and how a box about the truth behind his murder has been found. An item that was present in the box would lay out all the clues behind his mystery.

But the reality of the box has not yet been disclosed or rather, it has been swindled away in oblivion like all the other unsolved mysteries and cases.

Read Also: Who Was The Zodiac Killer?