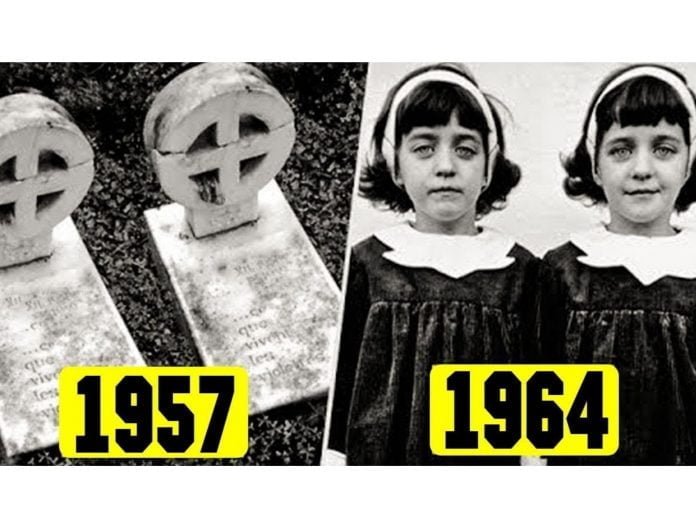 When tragedy and fantasy clash, a new conspiracy takes shape. However, metempsychosis has also been a controversial topic. It is a belief ingrained in Hinduism and Buddhism, where one believes that the soul lives eternally although, the body doesn’t. Thus, a man takes rebirth by instilling himself in a new body, depending upon his actions in his past lives.

But what happens when this theory has a practical example?

On a spring day, a Catholic family living in England’s Hexham town was broken. Parents, John and Florence Pollock, lost their twin daughters in a devastating car accident. Reportedly, in 1957, the two sisters, 11-year-old Joanna and 6-year-old Jacqueline, along with their uncle, were visiting the church to offer their prayers. Suddenly, a car crashed where the driver lost control and took triple lives in a flash.

On 4th October 1958, Florence gave birth to twin daughters, which the doctors thought was impossible. Nonetheless, Gillian and Jennifer were born.

The couple was an ardent believer of the reincarnation prophecy. While John had faith in his dead daughters’ rebirth, Florence thought it to be a coincidence. Their family doctors believed that the twins’ rebirth would not be possible; John knew it was their daughters in his heart.

A highly unusual thing to be noticed was that one of the twins had certain birthmarks.  Jennifer had a small birthmark on her hip, which resembled the birthmark of Jacqueline. She also had a scar, on her forehead, in the same position which Jacqueline had.

After getting their lives back, the family shifted to Whitley Bay when the twins were three months old. The Pollock clan was having the time of their lives when their mother, Florence, observed something unusual.

After their return, the twins could locate the school, parks, and toys with their names, which dead sisters loved. Florence knew that her girls were into some strange games.

One day, Florence saw the Pollock twins enacting the car accident that John and Florence never described to them. Jennifer’s head was resting on Gillian’s lap, and Gillian said, “The blood is coming out of your eyes. The car has caused it.” Florence couldn’t adjust her mind and was unable to process this event.

The Sister That Never Forgets:

For the first time, Florence agreed that her daughters took rebirth. On an occasion, while pointing at Jennifer’s scar, Gillian said, “This scar is because Jennifer got hit with a bucket.”

In 1963, Ian Stevenson got interested in the Pollock Twins, the theory of reincarnation. He was studying reincarnation as a central topic and started investigating when the twins were four years old. However, it was only in 1967 that he met the family— when the twins reached 20.

He visited them even after Florence’s demise. In 1979, his book ‘Reincarnation and Biology’ contains the reports of his findings.

As for reincarnation, it is a hot topic in the psychological and religious world. It also gained the attention of several news agencies. Consequently, Pollock Twins theory of reincarnations faced a lot of criticism.

By way of explanation, Richard Rockley suggested that John Pollock had a firm belief in reincarnation prophecy and might have talked about his deceased daughters in front of them.

Secondly, Miles Edward Allen also dismissed the case because Florence and John were the only testimony and were biased towards the prophecy. However, Stevenson studied other monozygotic twins, which proved the theories of reincarnation.

It might sound a little bizarre to some of us, but for the conspiracy-lovers, it is big news. India might be having its own...
Read more

Remember the time you were 8, lying on your back on the terrace or in your garden staring at the sky? Suddenly you would...
Read more

Seth Rich, 27, was an employee of the Democratic National Committee. He was murdered...
Previous article
The Mysterious Loch Ness Monster of Montana
Next article
Is Walt Disney Truly Dead? Is He “Technologically” Frozen?
Conspiracy theories