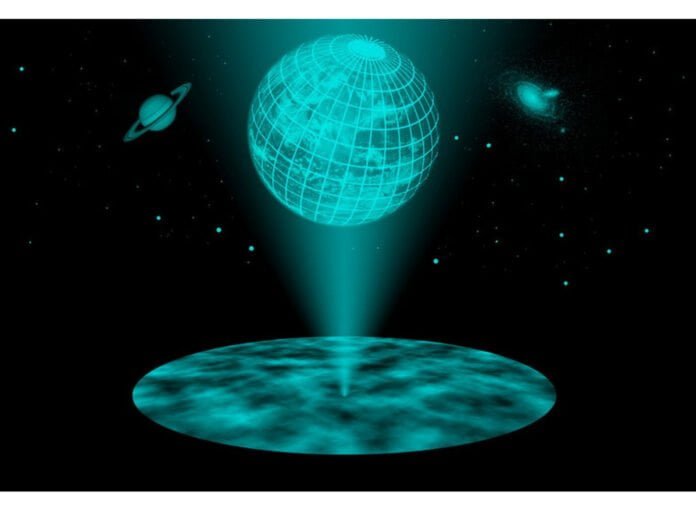 The Universe is like a haunted house. It’s dark, scary, and mysterious. Scientists and astronomers have been studying and trying to come up with a possible explanation for our mere existence for centuries. Well, all we’ve been left with are deep mysteries and more unsolvable theories.

We all know, theories suggest that the big bang could have started the Universe 14 billion years ago, and it has been evolving ever since. And so are we. We are a part of this universe and thank the holy heavens, and we have a really complex brain structure to decipher and comprehend the way it works.

We all are aware of the fact that we live in a three-dimensional world. Well, so is the Universe. Its made up of three dimensions of space (length, width, and breadth) and one dimension of time.

But what if everything we see today is just a projection? What if we are just a hologram of an equivalent version that lives on the outer surface of the Universe? Wouldn’t it be cool to be a photographic projection of the real you from elsewhere in the Universe?

Well is it? Let’s find out.

Table of Contents show
Re-thinking The Nature Of Reality
The Holographic Principle
So Which One Is Real?

Re-thinking The Nature Of Reality

Physics is complicated as it is. And over the centuries, people have been coming up with some rather intriguing theories that state the reason for our existence. Although each of these defines and deals with totally different stuff, it somehow either relates or contradicts the other hypothesis.

General relativity and quantum mechanics explain the Universe in the most beautiful ways possible despite its complexities. But what if the two theories get into a science battle?

Given that relativity deal with bigger things in the Universe such as planets, stars, and galaxies or any actual thing has to do with gravity, and quantum mechanics deals with the most minor, most delicate things such as atoms and molecules, there’s absolutely no reason for one to claim the  “I am the best” title because they need to co-exist to understand the Universe.

But there is one place where these two theories contradicted which gave rise to a whole new hypothesis. It all started when Stephen Hawking proposed that anything (matter and information) that goes into the black hole is lost forever as black holes are highly dense regions of spacetime and have a strong gravitational pull that nothing, not even light can escape. This is because in a black hole, space is moving inward faster than the speed of light.

It gobbles up anything and everything that comes in its way. It is basically a hungry monster that’s rampaging its way around in space, sucking everything into it.

He tried to prove that the information isn’t lost but is still there inside the black hole, and this is when he realized that the things that were happening inside a black hole were similar to a hologram.

Leonard Susskind and one of his close friends and physicist, Gerard ‘t Hooft, came up with the holographic principle that explains the state where information is preserved in the boundaries of the system. Working on proving this contradiction paved the way for ideas such as the Universe itself being a hologram.

So the inside of the black hole is just a projection of the event horizon.

This gets weirder by the minute. So our universe might appear three-dimensional when it’s actually just two-dimensional.

So Which One Is Real?

It could be either one. He says that according to mathematics that there’s an equivalence. We could choose to be either one. Either the one that lives on the outer surface or the one you are in here, as the theory suggests one can be here and also there.

After all, it’s just a theory, and we use analogies and metaphors to grasp the ideas, trying to understand our own existence.

Federal Emergency Management Agency is an agency under the jurisdiction of United States Department Homeland Security. It's headquarter's in Washington D.C. FEMA was established...
Read more

Seth Rich, 27, was an employee of the Democratic National Committee. He was murdered...
Previous article
Is Climate Change A Potential Crisis Or A Devised Plan?
Next article
Did The US Really Make Warships Disappear?
Conspiracy theories