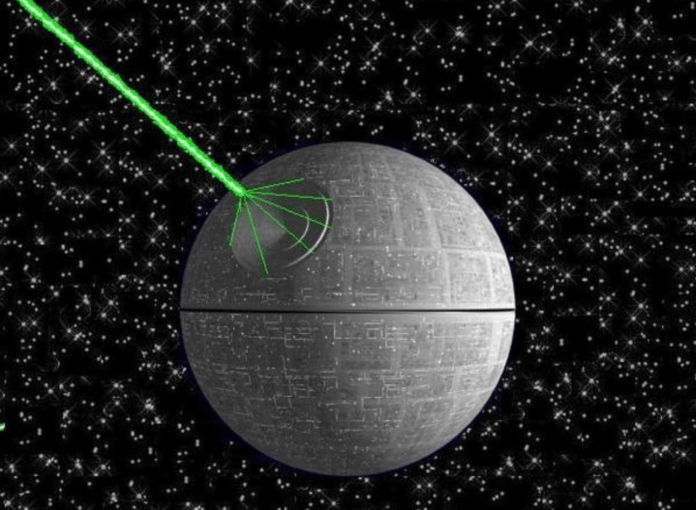 It’s fascinating how there are over 200 moons in our very own solar system. Most of them have their unique names, for instance, Kalyke, Umbriel, Iapetus etc. As of now, Saturn seems to hold the record for hosting the most number of moons in the entire solar system with 53 confirmed and 29 provisional ones.

Woah! Imagine your evening sky greeting you with 82 moons. Unfortunately, we don’t live on Saturn. What’s amazing is that not only do these moons have weird names but they also seem to have a peculiar structure that makes experts question if they are natural or were formed by alien colonization.

What do we do other than blame aliens, right? Anyway, speaking of peculiar structures in the universe, it is Saturn’s moon, Iapetus, that has caught the astronomers eye this time.

Well, you got to ask me. What’s so peculiar about this one? Another alien-implanted spaceship? Does it spin backwards? Or is it not a moon at all?

Although these questions seem fairly relatable, they still didn’t make the pass.

Moon Iapetus is famous for its uncanny resemblance to the Death Star from the Star Wars franchise. Conspiracy theorists believe that the franchise could not have taken inspiration from this astronomical object because we didn’t have clear images of this moon until the early 2000s. Which has got experts puzzled as to what this moon could be.

Is Ipapetus An Alien Death Star?

Conspiracy theorists believe that this moon could be some alien death star due to its unusual features. Iapetus was discovered by Giovanni Cassini, an Italian astronomer, in 1671. He was flabbergasted that after observing the moon for days he found it to be half visible and half invisible.

But it wasn’t until the early 2000s that NASA’s Cassini spacecraft flew close enough to Saturn’s third-largest moon to get close up images.

This exploration gave us some clarity as to what this structure might be. The Cassini space probe’s pictures proved that there was no other moon with such distinctive features.

It revealed that the moon wasn’t invisible but it was two-toned, half dark and half as white as snow, and was nicknamed the Yin-Yang moon.

Another stark feature that cannot go unnoticed is its equatorial ridge which earned it another nickname, the walnut moon. The image showed a line stretching around the moon’s equator and a massive crater on top, which is also another prominent feature of the Death Star itself.

16,000 km long, 20 km wide and 12 miles high, this ridge covers 75% of the moon’s equator and almost looks as if two artificial pieces were welded together as one.

Some also claim that the moon is not circular but hexagonal. The terminator lines form razor-sharp edges proving it to be artificial.

Science Behind its unusual structure

As to its two-toned features, scientists believe that the moon must be tidally locked to Saturn to be facing only one side. They also believe that 3/4 of it must be ice and 1/4 rock. Another theory suggests that the dark hemisphere might be made of matter swept up from space or oozed from the moon’s interior.

Iapetus orbits in the outermost orbit of all of Saturn’s moon next to its distant dark moon, Phoebe. An alternative theory suggests that Iapetus must be sweeping particles from Phoebe. Although the real reason is unknown.

As to the ridge, Saturn’s moons orbit in the same plane but only Iapetus spins in an inclined plane. No other larger moon in the solar system has that tilt. Another theory suggests that the moon must have spun too quickly to cause the thick crust to freeze forming the odd shape. Or it was just debris from a collapsed ring.

Researchers are still working to find out more about this specific structure. Is it just a coincidence that one of the moons of Saturn look slightly like the biggest weapon of mass destruction the human mind has imagined? Or did the aliens have access to the legendary Star Wars and created the moon of Saturn in it’s wake. As absurd as that sounds, it definitely is something to learn more about.

When has there ever been an election without the public naming and shaming of the candidates? Dirty secrets spilling out, some truths and a...
Read more

Nikola Tesla, of all the scientists and inventors that have contributed to the innumerable facilities that we enjoy today, Nikola Tesla is an important...
Read more

Seth Rich, 27, was an employee of the Democratic National Committee. He was murdered...
Previous article
Is The Ghost Town of Cerro Gordo Haunted?
Next article
Do Black Cats Bring Bad Luck?
Conspiracy theories