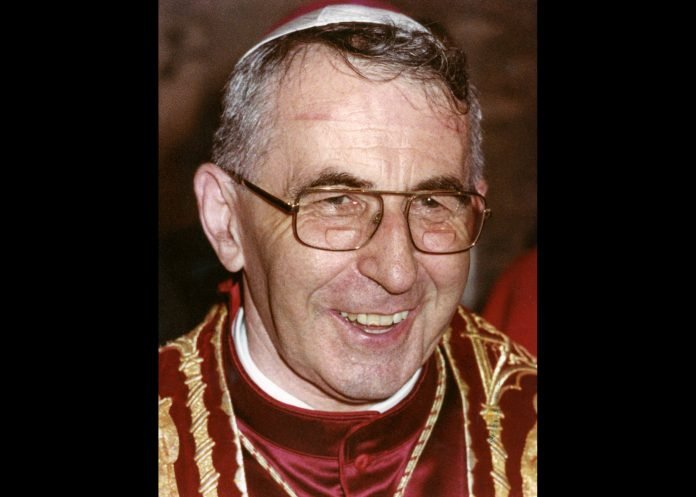 On the 26th of August 1978, Pope John Paul I (his birth name was Albino Luciani) had been made Head of the Catholic Church and Sovereign of the Vatican City for the shortest duration of 33 days in papal history. Before being elected he had expressed that he did not have any intention to be elected but on the appointment by the Cardinal, he was obliged to say yes. He was called the “smiling pope” because of the smile he always wore on his face.

On the morning of September 29th, 1978, Sister Vicenza walked in Pope John Paul I’s room and found him dead. She and another nun whom she had summoned in horror later reported that the Pope’s skin was cold and that his “nails were surprisingly dark”. The reason apparently for the death of the Pope was hearth attack and it was said that he was “found dead in his bed, with a book opened beside him, and the reading light on.”

This very mysterious death of the 33-day Pope left a lot of people shocked as well as suspicious. The people noticed that there were a lot of inconsistencies in the reporting of the incident. There were different says on which book the Pope was reading, the timing of his death or who found the body first. He never had a history of any sort of heart problem and was healthy when he went to sleep. Also, his body had never been autopsied.

People started suggesting that the Pope had not died but had been murdered. Several reasons for the same have been suggested by different people over the years. A point to be noted is that these suggestions have not been made by any random person or group of people but have been published in books by those who have studied the case and the reports that were made public after the death.

David Yallop’s In God’s Name, talking about the death of Pope John Paul.

In his book published in 1894, David Yallop proposed that when the dead body of the Pope was found, in his hand was clutched a letter that was destroyed because it had big names that were involved in a big corruption scandal of the Vatican Church. The Pope, according to him discovered the scandal and wanted to disclose the names of those involved and was therefore murdered.

His book also suggests that there were Cardinals in the Vatican Church who were associated with Freemasonry, a practice that was forbidden by the Catholic Church. Yallop alleges that Pope John Paul I knew secrets of the Church and wanted to reveal them and therefore he was murdered. He also mentions the names of three cardinals who would gain a lot if the Pope would suddenly die.

Theologian Nantes posed similar allegations as posed by Yallop. His allegations, however, were based on statements he had spent his life collecting from different people who knew the pope before and after his election. He also accuses the Cardinals of the church of Freemasonry and corruption.

This theorist, on the other hand, adds that the CIA was involved in the murder of the “smiling Pope” to the already existent theories of Yallop.

Numerous productions have been staged in Britain especially tracking the events and suspicions leading to the death of Pope John Paul I. For instance, The Last Confession by Roger Crane depicted the tensions and suspicious political incidents and motives within the Vatican surrounded the Pope’s death. A book by Malachi Martin named Vatican: A Novel suggests that the Pope was murdered by the Soviet Union in order to prevent a certain policy established by the two previous popes that Pope John Paul didn’t agree to.

With so many suspicions and doubts surrounding the murder of the Roman Catholic church head, some of the allegations we might say have been fictionally imagined in order to earn publicity and money. However, the earlier writings might hold a certain essence of truth to it. David Yallop, in fact, had said that he would donate every penny that he earned from his book about the Pope if the authorities investigated his claims about the death.

Whoever said whatever, till today the reason for the death of the Pope is officially known to be a heart attack but even 41 years later the discrepancies of the death continue to drive people to believe otherwise.

NASA has been showing a steadfast improvement in the field of space technology. Not...
Previous articleDid Stephen King kill John Lennon?
Next articleWho was behind Lincoln’s assassination?
© Newspaper WordPress Theme by TagDiv