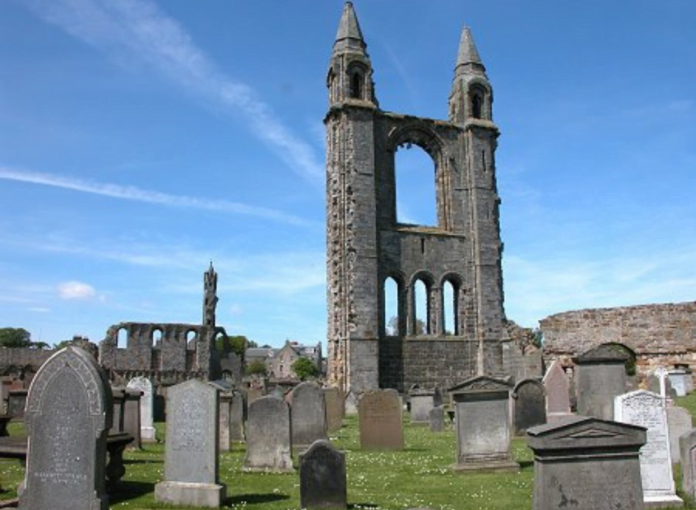 Famous for its golf sites, St Andrews Cathedral was once the site of the largest medieval cathedral in Scotland but today it stands in ruins. Each stone here has its history which isn’t very peaceful. The church has a massive past and of course, a lot of ghosts. With more than 200 places said to be haunted and more than 400 ghosts lurking in the place, St Andrews Cathedral is a spirit magnet.

But why is it haunted? Is it because of the massive graveyard, more commonly known as “The Chamber of Corpses”? The Death Dungeon? Or is it because of its bloody and sad history involving a lot of death? The moment they step onto the church grounds, people have described a feeling of unease and that they don’t belong there.

The Chamber of Corpses in St Andrews Cathedral

The haunting tower among the remains of St Andrews Cathedral is a location with a grim past. The tower walls conceal a locked tomb containing ten well-preserved mummified remains.

Surprisingly, one of the bodies matched the White Lady who was frequently seen haunting the property. It was the mummified bones of a tiny, slender woman with black hair who had been wrapped in silk textiles with great care. The bodies are thought to be of local Celtic Saints who lived over 1000 years ago.

Cardinal Beaton’s ghost is now supposed to be stranded at St. Andrews, rumored to be wandering the castle’s halls and gardens.

People have found human teeth on graves. Teeth in ancient times were used by Pagans for their rituals. So is it possible that some of the Pagans still practice these rituals?

The Dungeons in St Andrews Cathedral

Is a castle truly a castle if it doesn’t have gruesome tales of death and betrayal buried somewhere deep within its dungeons? St Andrews Cathedral is surrounded by several frightening stories of torture, murder and eerie tales.

The St. Andrews Bottle Dungeon is a 7-meter-deep chamber where those who enter are sentenced to a terrible death. The dungeon is so little that you might mistake it for a well. In actuality, George Wishart’s horrifying and brutal death took place in a nightmare-inducing 5 meter-wide room. Just outside St Andrews Cathedral, George’s initials can be seen on the road. The location of his initials is where he revolted against the Catholic church. Cardinal Beaton burned a protester, Wishart, alive as a penalty for his crime of protest.

The Cardinal’s death infuriated the protestants in St. Andrews, so they attacked the castle and assassinated him, slashing him and hanging his body in the street for all to see. I wouldn’t advocate going into this chamber if you have claustrophobia.

The Veiled Nun of St Leonards

The Veiled Nun of St Leonards is one of St Andrews’ most well-known ghost stories. Visitors to Nuns Walk, a short length of the road leading to St Leonard’s Kirk, have reported seeing a disfigured Phantom.

According to legend, after her lover died, a local girl became so depressed that she vowed to mutilate herself so that no male would ever be attracted to her again. Her ears were slashed off, her nostrils were split, her cheeks were branded, and her eyelids and lips were cut off. She later became a nun but died as a result of her self-inflicted injuries.

She may still be found lurking up and down Nuns Walk, lifting her veil at passers-by unlucky enough to cross her way.

The ghost is thought to be a manifestation of 19th-century golfer ‘Young’ Tom Morris, who won the Open Championship four times in a row starting at the age of 17.

Tom Morris, a young man, met a sad end. He returned home from a golfing vacation in 1875 to find his wife and baby had died in childbirth. The golfing star died four months later after suffering a heart attack, leaving his family devastated.

A phantom golfer is supposed to haunt the bunkers and fairways of St Andrew’s Old Course, but instead of being a cruel, malicious spirit, it is said to be rather helpful. Local golfers have reported seeing a ghostly apparition that assists them in locating and retrieving errant balls from the rough.

The Monk of St. Rule’s Tower

Many of St Andrews Cathedral’s ghosts, like Young Tom Morris, are friendly. The St Rule’s Monk, who emerges on its antique steps from time to time, fits into this type. The monk is supposed to guide tourists safely up the stairwell, ensuring that they reach the tower’s peak without falling off.

In the 1950s, a ‘kindly monk’ who was obstructing his route provided help on the steps to a visitor to the tower. The man said he felt nothing as he ‘squeezed’ past the monk on the narrow stairwell when he refused.

Over the last 200 years, the White Lady has been seen countless times. She is supposed to live in the precinct of the medieval cathedral, dressed entirely in white, and may frequently be seen waving a handkerchief from a window at St Rule’s Tower, dubbed the “Chamber of Corpses” by Victorians. Visitors to her ‘lair’ are reported to irritate her.

Stonemasons working inside the tower in 1868 uncovered a group of coffins within a “secret” enclosed room. One of the caskets lacked a lid and had the well-preserved bones of a woman dressed in a white gown and wearing white leather gloves.

Aside from its gruesome past and ghosts, with gothic architecture and detailed stone structures, the St Andrews Cathedral is eerily beautiful and is worth visiting. But just hope that one of the many unfriendly ghosts don’t cross your path.

The Millennium Biltmore hotel of the Bowman-Biltmore group, located in Downtown California, Los Angeles is one of the most expensive and lavish hotels in...
Read more

The Conjuring: What Crazy Things Happened in the House?

Seth Rich, 27, was an employee of the Democratic National Committee. He was murdered...
Previous article
The Murder of Sharon Tate
Next article
Dark Side of The Moon: What Mystery is the Moon Hiding?
Conspiracy theories