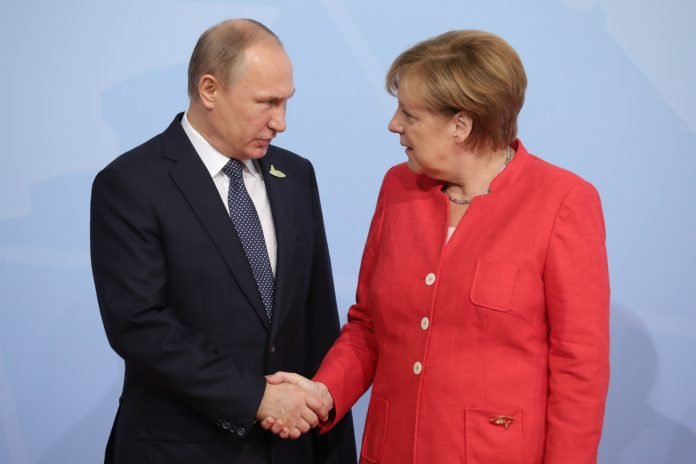 Angela Merkel was made Chancellor of Germany in 2005 and since then has continued to be in the office to date. She is known to the world as one of the most powerful leaders of the European Union. People also say that she could be a new leader of the ‘Free World’. All this is after she came to power as the leader of Germany. Her life before that was also very interesting.

Merkel was born in West Germany but she moved to East Germany and was brought up there. She joined politics in 1989 and has since then had a very progressive political career. By 2205, she was made Germany’s first female chancellor.
This article, however, is about one of the popular conspiracy theories that surround the life of this very prominent world leader. The proponents of this conspiracy theory suggest that Angela Merkel, the Vice-Chancellor for Germany for the last 14 years is actually a German agent and that she is affiliated to KGB, the main security agency or intelligence agency of the USSR until its break up in 1991.

Table of Contents show
Why Russia?
The Construction of the Plan
The Angela Merkel-Putin Equation
Conclusion

As mentioned above, Angela Merkel was brought up in East Germany, which was a very crucial and sensitive part of the communist Soviet empire during the Cold War era before its disintegration in 1991. This alone gives the conspiracy theorists reason enough to suspect Merkel for being a Russian sleeper agent.

They said that nobody can un-notice not only the fluency with which Merkel speaks the Russian language but also how enthusiastic she is about it. This theory, however, has two popular divisions. A part of people believes that Merkel was always a Russian sleeper agent and her becoming the Chancellor of Germany was a part of a bigger plan against Germany. Contrary to this, the other half believes that she was not always an agent, but now she is because she has been turned. A book, in fact, called First Life of Angela M. is constructed around this very theory.

The Construction of the Plan

The theory suggests that during 1989, Russia realized that East Germany could no longer be sustained and therefore, they somehow appointed this well trained and young physicist Angela Merkel, who got to know Helmut Kohl, the then Chancellor of Germany. Merkel concertized her place in the politics of Germany and finally in 2011, with the phase-out of nuclear power she made Germany dependent on Russia for the most basic need of energy. Merkel was heavily criticized for this decision by the media houses and the common people looked down upon this decision by Merkel’s government.

Another important aspect that we must talk about when we talk about this conspiracy theory is the extremely complicated relationship between Angela Merkel and Russian President, Vladimir Putin.

Just like Merkel had old ties with Russia, Putin is known to have old ties with Germany, just like Merkel can speak fluent Russian, Putin can speak fluent German. Very interestingly, it is known the Putin was a secret agent for KGB posted in East Germany during the most crucial times of the fall of the Berlin Wall. Merkel and Putin have known each other for a long time, even before they became world leaders.

They speak each other’s language better than their own and often tend to abandon or ignore the translators during official meetings. Experts in body language have pointed out the uncomfortable vibe that they share. There is always a possibility that this is because of the messed up relations between the two countries but there is always a possibility of it being the other way.

The angle gives more proof to the proponents of this particular theory to talk about Angela Merkel being a Russian sleeper agent. On the other hand, another version of this theory suggests that Angela Merkel is not an agent of Putin’s country but the other way round stating the possibility of Putin being a secret agent of Germany.

Whatever is true or untrue, one thing is clear. It is, that the relationship between these two countries and their leaders is more complicated than it seems from the spectators’ eyes and that is why the conspiracy theorists have taken such a keen interest in it.

Seth Rich, 27, was an employee of the Democratic National Committee. He was murdered...
Previous article
Men in Black: are they real?
Next article
Did Stephen King kill John Lennon?
Conspiracy theories