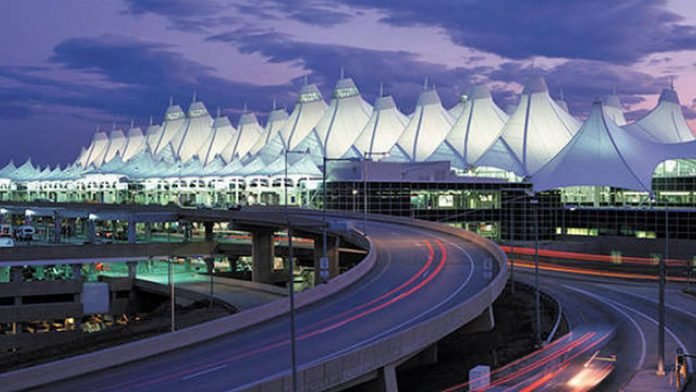 The Denver airport is not just a random airport anymore, for this important location has now been transformed into the epicenter of apocalyptic beginnings. That’s right, the Denver airport has been shrouded in a thick cloak of mystery which accuses it for being a site for Illuminati members to gather and spread around the world. Here are all the reasons as to why the airport has garnered such attention.

Table of Contents show
1 The time of construction of Denver airport:
2 The significance of the blue horse:
3 Where are the headquarters?
4 Why do the underground tunnels have bunkers?
5 Do the artworks provide a clue about the world ending?
6 Leave your vote

The time of construction of Denver airport:

Many theorists prefer tying the construction of this mega airport to the New World Order, creating them for its creation, thus associating it to Nazism. Some even point out the similarity of the runways of the airport to that of the Nazi symbols ‘swastika,’ saying that the runways have been designed to resemble the Nazi icon. However, photographs taken from the angle do not show the runaway in any shape, unless obviously you are looking for runways to form a swastika.

However, another interesting fact that has emerged from the construction process is the fact that an organization called the New World Airport Commission has been credited for the development, and while this may seem like just a rumour, the airport website has itself identified that no such organization exists.

Frequent travellers have also claimed to spot some unique markings on the building of the airport which actually aids in associating it with the New World Order. These mysterious marks on the building have been associated with references to the Navajo language or periodic table of elements, as stated by Mental Floss.

The significance of the blue horse:

The blucifer or the blue mustang, a 32-foot fibreglass sculpture which has been created by Luis Jimenez, is located along Peña Boulevard and has been inspired by the sculpture Mesteño, at the University of Oklahoma, however, the muse has its own share of theories that make it sound all the more suspicious. The statutes have red glowing eyes which can be considered as a form of tribute to the Four Horsemen of the Apocalypse, albeit the artist has insisted that the colour red is a tribute to the wild spirit of American West.

An interesting part about the artist’s death is that just two years before the completion of the statue and its big revelation, Jiménez died right after he clarified the usage of red colour when a big piece of the statue fell over him and severed an artery in his leg. Maybe Karma is real, or it’s just how society works.

Where are the headquarters?

There are various unmarked buildings and underground areas which have been spotted near the airport’s property. A certain theory that has been travelling for some time states that a time capsule has been buried on one of these properties, and flaunts a symbol related to the Freemasons which have time and again been associated with the Illuminati. One of the primary reasons for association with the secret society can be attributed to the fact that the Denver airport is much more expensive than the paperwork that says otherwise, and the only way it could have been finished off with such perfection is if it made use of the Illuminati money.

The DIA website clearly states that some buildings were not finished properly, but the authorities instead of demolishing them, added more buildings on top to bury the existing, ones thereby giving Illuminati its personal ‘underground lair’.

Why do the underground tunnels have bunkers?

Seems like the apocalyptic theory has a rather strong grip over the Denver airport which refuses to go away. There are underground tunnels in the airport, along with a train that is responsible for running between concourses and a defunct automated baggage system, but the real purpose of the tunnels seem to be rather unambiguous. Many believe that the tunnels have underground bunkers that will act as a haven for the elite members of the society when apocalypse takes place, according to the DIA website.

While the DIA website fuels rumours that surround it, most often it is believed that the truth is right where humour takes a turn. Some theorists strongly believe that the tunnels lead straight to the North American Aerospace Defence Command, which is located only about 100 miles south of the airport, however, in retrospect, this could be an expensive mode of travel that could take years to develop completely.

Do the artworks provide a clue about the world ending?

The public collection of the DIA art pieces involves a rather bizarre collection of works, apart from the blucifer. Many of these, including murals, are credited to artist Leo Tanguma that have led to observers claiming about the incorporations of various symbols of the fascist secret society. The Tanguma murals are related to world peace and a healthy environment.

However, their terrifying designs seem to convey otherwise. There are various gargoyle statues that have been said to watch over the airport, which seems like a rather suspicious move. There are gargoyle statues near the baggage claim, to ‘protect’ the luggage of the travellers, and ‘ward off’ evil.

As lovers of conspiracy theories, we can only speculate and connect the dots which the evidence presented to us, however, we must look beneath the layers that may be shrouding some of the most astonishing, well-kept secrets. Whether you believe it or not, truth is stranger than fiction, till then happy researching.

The Mysterious Death Of Geli Raubal: Hitler’s Niece And Lover

The Mystery of the 8 Day Bride, Christina.

Is The Government Conducting Experiments That Can Make Warships Disappear? Our governments are quite something....

The Universe is like a haunted house. It's dark, scary, and mysterious. Scientists and astronomers...

I don’t know how anyone can not notice the world changing into a desert,...

Keanu Reeves has been in the film industry for nearly 3 decades now, and...
Previous articleThe Giant Stone Spheres in Costa Rica: Speculations Behind their Creation
Next articleThe Tale of the Secret Tomb of Tu Duc, Vietnam’s Emperor
© Conspiracy Theories