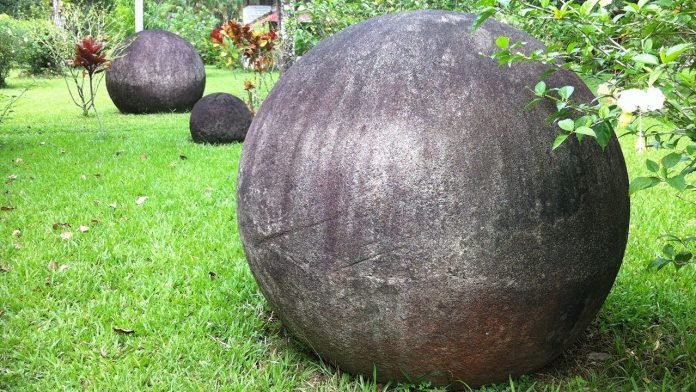 People, who remain glued to Hollywood narratives can recall the famous scene from “Raiders of the Lost Ark” where a giant stone sphere nearly crushes Indiana Jones to death. While the movie continues to remain a great work of fiction, the giant stone spheres did not become much of an attraction.

Table of Contents show
1 The discovery of the Giant Stone Spheres:
2 What were the spheres used for?
3 The speculations around their emergence:

The discovery of the Giant Stone Spheres:

The discovery of these huge rocks can be traced back to 1940 when, while clearing the jungle for banana plantations in 1940 in Costa Rica’s Diquis Delta region, employees of the United Fruit Company unearthed several large stone spheres which were slightly buried in the forest floor.

What were the spheres used for?

The mysterious spheres then became prized ornaments, almost immediately after being discovered. These were deployed as prized ornaments on the front yards of government buildings and fruit company executives throughout Costa Rica. Many of them were broken or damaged which further added to the aesthetics, while others were dynamited in a time when few realized their archaeological value.

John Hoopes, associate professor of anthropology and director of the Global Indigenous Nations Studies Program, claimed that around 300 spheres are known to exist, the heaviest and largest weighing 16 tonnes and measuring eight feet in diameter, while the smallest one is in the size of a basketball. Almost all of them are composed of granodiorite, a hard, igneous stone.

The speculations around their emergence:

A number of theories and speculations about the purpose of these giant stone spheres have emerged since their discovery, from the balls being navigational aids to relics related to Stonehenge or the assimilation of an unknown ancient civilization.

One of the biggest mystery which surrounds the event is that the way in which these near-perfect spheres were created, which appear to have come from a quarry that was more than 50 miles away and further adding to the mystery, these stones were created at a time in which metal tools had apparently not been invented, as these stones were speculated to have been made around 600 AD. However, the dating method for stones is speculative and subjective as it does not reveal the time when they were first created, but rather indicates the latest use of the spheres. These objects have been immobile for centuries so it becomes difficult to speculate when they were actually created.

The actual usage of these humongous stones remains a matter of mystery. The people making them did not leave back traces or documents in any form indicating the usage of such stones. The archaeological data remains the sole source for reconstructing the context for the creation of the giant stone spheres. The culture of the people who established the stones became extinct shortly after the Spanish conquest. So, there is an absence of any myths or legends that are held by the indigenous people of Costa Rica about why the spheres were made.

One of the popular theories holds that the spheres were simply status symbols. The stones, which are now preserved by UNESCO, were seen to be arranged into massive patterns having astronomical significance since many of the balls were found to be in alignments, combining straight and curved lines, as well as triangles and parallelograms.

According to UNESCO, the stone spheres which till date leave the researchers speculating about the method and tools of their production, are an epitome of exceptional testimony to the artistic traditions and craft capabilities of Precolumbian societies.

While almost every sphere has been relocated from its original location, researchers are dubious if the true meaning of the spheres will ever be discovered.

Also read: Most Plausible Theories for the Construction of the Pyramids of Giza

NASA has been showing a steadfast improvement in the field of space technology. Not...
Previous articleDOTA 2: The World of Radiant and Dire
Next articleIs the Denver Airport Really a Hub for Illuminati ?
© Newspaper WordPress Theme by TagDiv