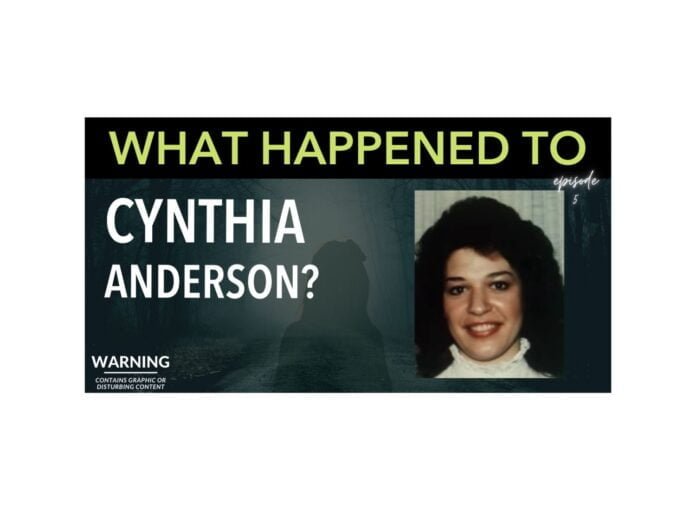 In the August of 1981, Cynthia Anderson, a legal secretary in Toledo, Ohio, went missing. She left for her job in the morning, like every day, but never returned. No one saw her, and even today, no one knows what happened to her.

The Life Of Cynthia Anderson.

Cynthia grew up in a highly religious household, with the Church at the centre of their lives. From swimming pools to camps, everything was arranged by the community of the Church.

Her father described her as “a quiet and obedient girl”, her neighbours thought she was a good-looking young woman. Her father, however, also said that she was paying too much attention to her face and was dieting, something he was not very happy about.

In the Church, Cynthia met a guy, and they started dating. He went to the Bible College, where Cynthia planned to go once she left her job as a legal secretary.

But this never happened, as she disappeared into thin air.

Cynthia’s job was not very smooth sailing. The year before she disappeared, someone painted “I love you, Cindy, by GW” on the wall in front of her office window. As there were no other Cindy or Cynthia in the office, it was understood that the sign was for Cynthia Anderson. She did not know anyone by the name of GW. The sign remained up on the wall for six months. When it was cleared, the sign was put up again, in bolder letters.

This was not all that she had to get through. Cynthia received calls on her telephone in her office. Her employer recalled that she used to get calls, and when she declined them, the phone would ring again and again. Cynthia was terrified by all this and even got nightmares that made it difficult for her to sleep.

Her employer told Cynthia to keep the office doors locked at all times, even in working hours, and put up an emergency buzzer on her desk.

All these precautions were, however, useless.

The Day Of The Disappearance Of Cynthia Anderson.

On August 4, 1981, Cynthia left her home in her car, like every morning and reached her legal office at 9:45 a.m. Her employer reached the office by noon. He reported that everything in the office was normal, but Cynthia was not there.

Cynthia usually left notes and put the phones on hold when she went out during office hours. But there was nothing to be found. Her car was still in the parking lot, but her purse, with her keys, were gone. There were no signs of struggle in the office, or her desk and the door was locked from the inside.

The only thing that arises suspicion is that a romance novel that Cynthia was reading was left open to a page where the female protagonist was kidnapped on knifepoint.

Even in 2021, the 40th anniversary of Cynthia’s disappearance, nothing is known; the internet has come up with various theories about what would have happened to her.

The police investigated the angle of the “I love you, Cindy, by GW” signs. They thought that it was some stalker who was obsessed with Cynthia. They tried to find out who GW was and could turn up one suspect with the initials of GW. He was the janitor who worked in the building and had the keys to every office. No evidence was found that proved the man had a hand in the disappearance, and no charges were pressed against him.

A month after Cynthia disappeared, the police got an anonymous call telling them that Cynthia was being held in the basement of a white house. The same family owned two houses, and Cynthia was supposed to be in the basement of one of these houses. After a thorough investigation of both the houses and even neighbouring houses, Cynthia was not found.

Murdered Because Of A Drug Deal.

Another theory is that Cynthia Anderson was murdered because she overheard some information at her legal office about a drug deal. In 1996, an attorney working in the same office as Cynthia was arrested for a drug conspiracy. It is theorized that Cynthia may have heard something and then was kidnapped and murdered to keep her silent. They were, however, not convicted for her murder as there was not enough evidence to prove their involvement.

Anthony Cook and Nathaniel Cook were two brothers who murdered nine people—mostly young women—in 16 months in the 1980s. They were suspected of the murder of Cynthia Anderson as well, but they denied her murder, and this lead was not followed any further.

Cynthia ran away from her house to start her new life somewhere else in a little happier theory. Her home was very religious and ensured strict curfews. Her sister said that both the sisters did what their parents told them to. It is possible to think that Cynthia did not want to continue living this life, with even her boyfriend being in Bible College.

No signs of struggle on her desk and the door being locked from the inside support the theory of Cynthia running away on her own. Though her back account had money, it can be reasoned that she did not want to be traced and hence left most of her money behind.

Whether Cynthia Anderson ran away or was kidnapped, if she is alive today and living her life to the fullest or died back in 1981, no one knows. All the theories mentioned above seem to be plausible.

The Epic Tale Of Ramayana- 9 Arguments Whether It’s Real Or Mythological?

Ramayana is one of the most sacred texts in Hinduism. It dates back to some 3100 B.C. People long for the kind of perseverance,...
Read more

Dorothy Jane Scott was a single mother, living in Stanton, California, with her aunt and 4-year-old son. She was a secretary for two jointly-owned...
Read more

Is The Government Conducting Experiments That Can Make Warships Disappear? Our governments are quite something. They are doing an incredible lot of things. They govern...
Read more

Seth Rich, 27, was an employee of the Democratic National Committee. He was murdered...
Previous article
Suicide bridge Of California: 4 Suspicious Deaths On The Infamous Bridge
Next article
The Mystery Of The Reykjavik Confessions.
Conspiracy theories