What happened With Mary Virginia Carpenter? 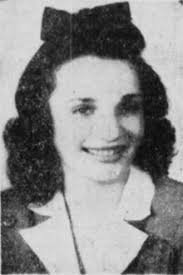 On Tuesday, June 1, 1948, Mary Virginia Carpenter boarded the Texas & Pacific Texas Special #31 for Dallas, Texas at Union Station in Texarkana about 3 p.m., and stopped in Denton, Texas around six hours later. She was on her way to Texas Women University, to enroll in the summer course. She planned to begin training there as a laboratory technician in the autumn but disappeared just before the summer term began.

The cab driver, Edgar Ray “Jack” Zachary, later stated he stopped in front of Brackenridge Hall at 9:00 p.m. and Carpenter gave the driver a ticket for her trunk and paid him a dollar so he would fetch it for her from the train station the next day.

After getting out of the cab, Zachary gave a statement that; Carpenter approached two young men standing near a yellow or cream-colored convertible car, possibly a Pontiac. He described the men as one tall and the other one as short and chunky. He said that Carpenter seemed to know them and began to speak to them, and Zachary drove away. The next morning Carpenter dropped off her trunk on the front porch. But the twist in the stomach is that Carpenter never checked into her dormitory, Brackenridge Hall, and has never been heard from again.

Three days later on Friday, June, Carpenter’s boyfriend, Kenny Branham, from Dallas, Texas called her mother in Texarkana because he could not get a hold of her. Mrs. Carpenter, now worried, called the school and found out that her daughter never even enrolled. She then called friends and family, but no one had even heard from her. On Saturday, June, around 12:30 a.m., she called the local authorities and the Denton police to report her daughter missing. The police told her to “just go to bed and we’ll get on the case in the morning”, but she could not sleep. So Mrs. Lucille Bailey, a friend of Mrs. Carpenter left for Denton at 2:10 a.m. Late Saturday night, the girl’s uncle and friends went to Denton to help assist the police in their search with any helpful information, but the failed to shed any light.

A full search began with airplanes to scan the Denton area and motorboats were used to search ponds and lakes. Search parties searched the tanks, woods, storm drains, creeks and abandoned wells. The search was now statewide. The officers who were in charge of the case talked to group and individuals witnesses as much as possible. Hunters and farmers were asked to be on the lookout for freshly dug dirt or any unusual odors. Pictures and description were distributed to every police station around to locate her whereabouts.

Her trunk was eventually opened, but it gave officers no clues. Her handbag was never found. A reward was set of $1,368 to the person who gave information about the person who was responsible for her missing and probable homicide. On Friday, July 9, Jack Zachary took a polygraph test which he passed.

Many leads and tips were thoroughly checked by the police but she was nowhere to be found.  More rumors started that she returned home or that her body was found or her luggage was found, but they were branded as false form the authorities.  On June 9, 1955, Virginia was considered officially dead by a Texas civil law. Article 55:41 in the Texas Civil Statute stated that a person who was successfully absent for 7 years should be presumed dead.

On October 18, 1959, a three by one wooden box was discovered, which contained female bones including a skull, in a smokehouse near an abandoned farmhouse 7.5 miles northeast of Jefferson, Texas in Marion County. The bones matching the height and weight were sent to Austin, Texas for examination. Mrs. Carpenter had hopes that it was her daughter’s remains because the bones had a deformity, and her daughter also had a deformity in her right leg which made it shorter than the left. Although the remains turned out to be from a white female with a shortened leg, the dental work did not match.

In May 1998, the police were tipped by a man in his 70s claiming that he knew who killed Miss Carpenter and where she was buried. He stated that she was buried on the grounds of the Texas Women’s University. The area was excavated, but only a leather glove a rubber boot and animal bone fragments were found.

Many people reported seeing her around but upon investigating it was found out that these sightings were not true, nothing was confirmed.

Since she went missing, many theories have been proposed as the reason for her missing. These theories included running away, leaving with a lover, being kidnapped, being murdered, amnesia, or was forced for prostitution. Doctors who were consulted stated she had nothing to run away from but had rather enthusiastically looked forward to the future. There was also a theory that she was killed by the “Phantom Killer”, and thus, it was wondered if he had something to do with her disappearance.

The authorities concluded she was dead because they believed there was no reason for her to disappear. They said she did not owe anyone any money; she had no criminal past, no jealous ex-boyfriends, no lovers convincing her to run away, and according to a medical exam before her disappearance, she was not pregnant.

10 Most Creepy And Terrifying Cults To Ever Exist

NASA has been showing a steadfast improvement in the field of space technology. Not...
Previous articleWhere is Madeleine McCann: The Missing Girl!
Next articleLarry STYLINSON THEORY, ONE DIRECTION MUSIC BAND
© Newspaper WordPress Theme by TagDiv