Are The Astra of Mahabharata Today’s Nuclear Weapons? 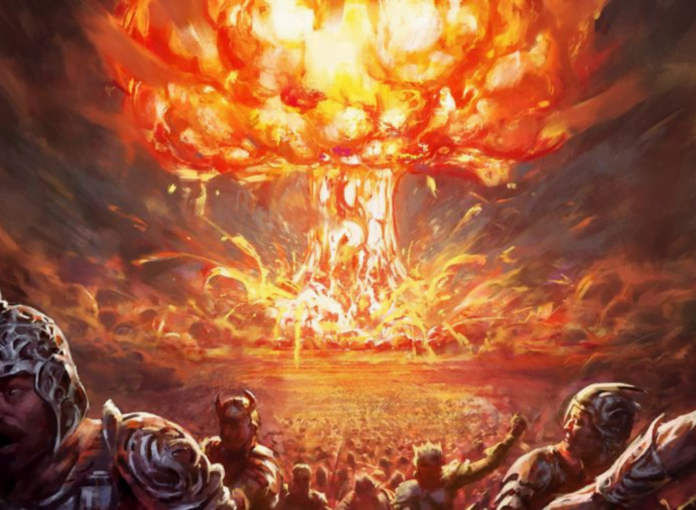 Since the rise of humanity, it is observed that we have had all sorts of equipment and technologies. It might now be archaic and obsolete, but everything we witness today, is a slight modification or modernization of things that exist in the pages of our mythology, like Ramayana or Mahabharata. Be it technology, physiology and medicine, UFOs or satellites, everything has a mention somewhere in our old books.

There has been a theory that draws an analogy between the nuclear weapons and Astra—the weapons used by the warriors in Mahabharata. Let us test the waters before we jump to any conclusions.

The History of Mahabharata

Every mythological text pushes some neurons in our brain and leaves us wondering if our ancestors really possessed such deep scientific knowledge? Well, as far as the belief goes, Mahabharata depicts a war between Pandavas and Kauravas in around 1000 B.C, which ended horrifically with a death toll of 1.6 billion people in just about 18 days. How could such a massacre happen in such a short span of time?

In modern times, the technology that makes it possible is known as nuclear weapons. Does that mean that the weapons—Astra and Dhanush—used in Mahabharata were some equivalents of nuclear weapons? Let us take a look at the types of weapons that were at their disposal.

This is literally a once-in-a-lifetime kind of a weapon. Powered by Lord Vishnu, this astra, as per the Mahabharata, possesses the ability to fire thousands of destructive missiles at once without a break.

It is quite a competitor of nuclear weapons. But as stated earlier, it was a once in a lifetime opportunity, i.e., it could be used once in a person’s life.

This was considered as one of the deadliest weapons the world has ever seen. It has taken after Lord Brahma. The target you choose to attack, would wholly and badly be destroyed in one go.

A proper nuclear weapon, don’t you think? But there is a catch, of course. This weapon had conditions. It could only be used when someone had exhausted every other little option available to them and had to be used for the betterment of humankind.

Pashupatastra, the weapon at the disposal of Lord Shiva, is one of the deadliest weapons in the Pandora box of Shiva and Kaali’s astra.

Only limitation is that it cannot be used on people weaker than you. It was used in the fight between Arjuna and Lord Shiva.

This is also a weapon of Lord Brahma but it is four times more destructive than Brahmastra. This weapon gets its power from the tip of the four heads of Lord Brahma. It causes a destruction similar to the levels of a hydrogen bomb.

The power of bhargava Astra was immeasurable. It is mentioned in our puranas that after the use of this astra, the world will be gone without any remains; not even the ashes. Chilling, isn’t it?

The good news is that this weapon was the antidote of brahmastra and brahmashirsha astra as it had the ability to nullify the destruction caused by them. But if used on an individual level, this was nothing but bad news.

Another feather in Lord Brahma’s cap is the brahmanand Astra. The source of the power of this Astra is the five heads of Brahma; one of which he had lost when he lied to Lord Shiva. It is also capable of destroying the whole universe.

There are a number of other significant weapons, missiles and launchers in the Indian mythologies—Mahabharata and Ramayana. But the Astras mentioned above were capable of great catastrophe. However, both the Texts depict the systematic and holistic military training and formation, along with the presence of powerful imaginary weapons.

Indian science has always been crowned as the overlord of the scientific world with its early inventions and discoveries that had the power to change the world upside down. So, it is not at all unreasonable to think that our ancient history, be it our ancestors or our Mythological literature, had some great thinkers possessing some out of this world knowledge.

Seth Rich, 27, was an employee of the Democratic National Committee. He was murdered...
Previous article
Is The Loch Leven Castle Haunted By Mary, Queen Of Scots?
Next article
Elfin Forest—The Forest of The Witches
Conspiracy theories