What actually crashed in Roswell that day? 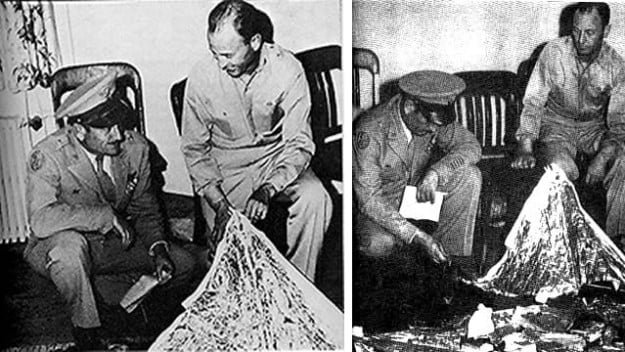 One of the main alien encounters may have occurred in 1947 near Roswell, New Mexico. An airborne object crashed and, according to the official US military report, it was an Airforce Surveillance Balloon. But is it what really official reports say?

Something crashed at Foster Ranch, located near Roswell, New Mexico before June 14th, 1947. And on 4th of July, a man named by Mac Blazer goes there to pick some of the debris. And 3 days later he takes the debris to local sheriff George Wilcox who then contacts Col.

“Butch” Blanchard at the nearby Military Base named Roswell Army Airfield. Col. Blanchard alerts his superior and ordered Maj. Jesse Marcel to overlook the crash site recovery and material collection.

Later he called Lt. Walter Haut to issue a press release which uses the terms like “flying disk” and “flying saucer”. The superior Ramey Gen. Ramey along with Mac Blazer who picked up some of the material, interestingly collaborate on the correction of term and says it’s a weather balloon and debris was not alien material but a stick, stones, and tough paper.

In 1978, a professor by the name of Stanton Freidman who interviewed the Retired Maj. Jesse Marcel and other witnesses, who admitted that the material “did not belong to Earth and was different”. It sparked the debate which continues today.

Let’s look at some of the theories what might have happened at Roswell.

Table of Contents show
1 Classified Project Mogul
2 A Cover-up by the US Government.
3 A Soviet Union conspiracy

In 1994, the US military admitted that there was a cover-up of a military project called “Project Mogul”. The materials were not of normal weather balloon but a top-secret weapon to detect atomic and nuclear tests by the Soviet Union.

The balloons of the “Project Mogul” were tested at several parts in the United States and one of them was near New Mexico.

A Cover-up by the US Government.

There is no physical evidence of the debris currently present and the claims of extraterrestrial material were never seen first-hand, but they’re more than 600 witnesses, ranging from civilian to high military official, all of them consistent in their testimonies.

Many officers present on the scene described crash material as “other-worldly” and “weightless” and yet “hard” enough not to be dented by a sledgehammer.

There were also sightings of “little bodies”, that many people believe are the alien bodies. In 1995, a film surfaced showing alien-like creatures and it was claimed to be filmed during the autopsy of bodies.

There is also a deathbed confession of Lt. Walter Haut claiming that he had seen the alien bodies and was upset by the cover-up.

Annie Jacobsen, in her book about area-51, claims that then-leader Joseph Stalin assigned a task to produce the “grotesque, child-size aviators” and that the bodies were of 12-year-old children with large head and eyes.

It was to create hysteria among the public and distrust of the US Military and the US Government.

The idea of extraterrestrial is both exciting and terrifying and we will never know what crashed at Roswell, New Mexico that day.

Hoaxes In The Time Of Despair: Rumors Around COVID-19

The Mysterious Death Of Geli Raubal: Hitler’s Niece And Lover

NASA has been showing a steadfast improvement in the field of space technology. Not...
Previous articleThe Story Of The Haunted Queen Mary
Next articleDid Tupac Shakur fake his own death?
© Newspaper WordPress Theme by TagDiv