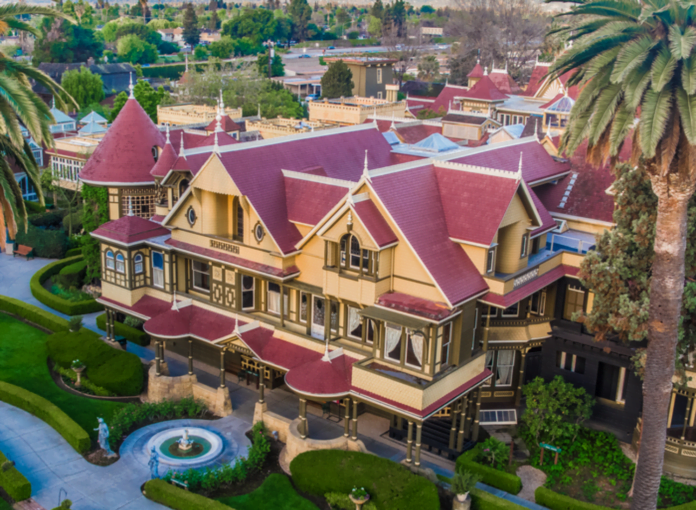 Legends thrive in the San Francisco Bay Area. But none are as bizarre as the story of the Winchester Mystery House. It is currently open to the public in a safe and socially isolated environment.

The Winchester Mystery House has piqued the public’s interest. The House has been featured on “Mythbusters,” “Ghost Adventures,” and “Ghost Brothers.” In 2018, it made a dramatic big-screen premiere in the horror-thriller “Winchester.” The tale behind the home is romanticized in the film, but the truth is far crazier than fiction.

Sarah Winchester, a widowed woman from New Haven, Connecticut, moved to San Jose, California, in 1886 to start a new life. She bought a little eight-room farmhouse and began a tiny renovation effort. But she did not know that the renovation process would last 36 years and cost $5.5 million (in today’s money), only to be completed when she died in 1922 and end up as the social oddity of the Winchester House.

The mysteries and theories about Sarah Winchester begin here itself. Some stories say that Sarah moved to San Jose after her husband’s death because she was being haunted by spirits and saw this as the only way to be safe from them.

The Winchester House’s oddities and structure.

What is it about the Winchester House that earned it the title of the Strangest house in America? Well, the sheer enormity will be the first thing you notice when you arrive. However, it is the least amazing thing about it. For example, despite the fact that there are over 2,000 doors, not all of them lead to the same place. Many of them lead to strange places. One leads to an outdoor garden with a 15-foot drop. You’ll end up eight feet below in a kitchen sink if you step through another.

The Winchester House not only looks, but is amazing. It is a modern marvel, with indoor plumbing, numerous elevators, a hot shower, and central heating. It contains more than 160 rooms and 40 bedrooms, as well as 10,000 windows and two basements. Of course, that isn’t the only thing that sets the residence apart. (That’s right, there’s more.)

There are more secret passages in the Winchester Mansion than a fictional castle does, with stairwells leading straight to ceilings, and pricey Tiffany stained-glass windows set in areas where they wouldn’t get any light. A cabinet that, when opened, spreads through 30 rooms is a particularly unusual delight.

Nobody knows why Sarah Winchester insisted on continuous renovations to her enormous home and that only encouraged people to find out the reason. There are many speculations and stories, some that the locals can recite by heart. Sarah Winchester was said to be haunted by the spirits of people slain by the Winchester rifle, which was invented by her late husband’s company. After her husband died, a psychic informed her that the only way to avoid the spirits was to relocate out west, buy a house, and keep building.

Some people believe that she feared she would die as soon as the house was finished, or in a way, building the house will make her immortal. Others believed she designed it like a maze to keep her paranormal tormentors away and get lost in the various abnormalities of the house. According to the notion, she would sleep in a different room every night and follow weird and twisting pathways through her own house to avoid them.

A small room with one entrance and three exists is present in the Winchester House. It is believed to the “Séance Room”, with 13 hooks in the wall. Sarah Winchester was believed to be a believer of the Spiritual World and believed she could communicate with the spirits.

In 1906, a major earthquake devastated the Bay Area, toppling the top three stories of the mansion and damaged the other four. According to legend, Sarah Winchester saw this as a message from the spirits that she was getting too close to finishing the house and ordered the unfinished front half to be boarded up. Though it is currently open, remnants of the earthquake’s destruction can still be seen.

The movie plays up the horror elements of the house, showing people getting possessed by spirits and the talk of the Winchester Rifle. If this was the reality or yet another over the top film to work with audience, is still unknown.

The truth of the Winchester House

Many researchers who have worked on the Winchester House, claim that there is no paranormal activities in the house. According to them, Sarah Winchester was a widow, living alone with a huge sum of money-she was even the richest woman in America at a point. She wanted to expand her house so that her sisters could come and live with her, but could never agree with the architects. She then took over the role of architect herself, and having no knowledge about the field, it worked out as well as it could.

The Winchester House is called a haunted house by many people and many stories but for some, it is nothing more than a waste of money. Sarah had the means to make mistakes and to continue making mistakes. Some, however, consider it a way for Sarah to give back to the society by keeping the local people employed as it was the time of the long Depression of 1893.

In the early 1990s, Winchester management hired Christopher Chacon, a parapsychologist, and paranormal investigator, to perform a full-scale scientific examination of the property in response to continuous claims of ghostly encounters and other unexplained events on the grounds. Over 300 people were interviewed about their experiences on the site throughout the month-long inquiry, which studied every part of the surroundings for any strange happenings.

Mysteries seem to not stop as now that the house is open to the public, many visitors say that they saw something or heard their names whispered in a seemingly empty room. Looks like it is one of the mysteries which only deepens.

NASA has been showing a steadfast improvement in the field of space technology. Not...
Previous articleThe Truth Behind The “Alleged” Sleep Paralysis Demons
Next articleGarh Kundar : The Disappeared Mystery Fort
© Newspaper WordPress Theme by TagDiv