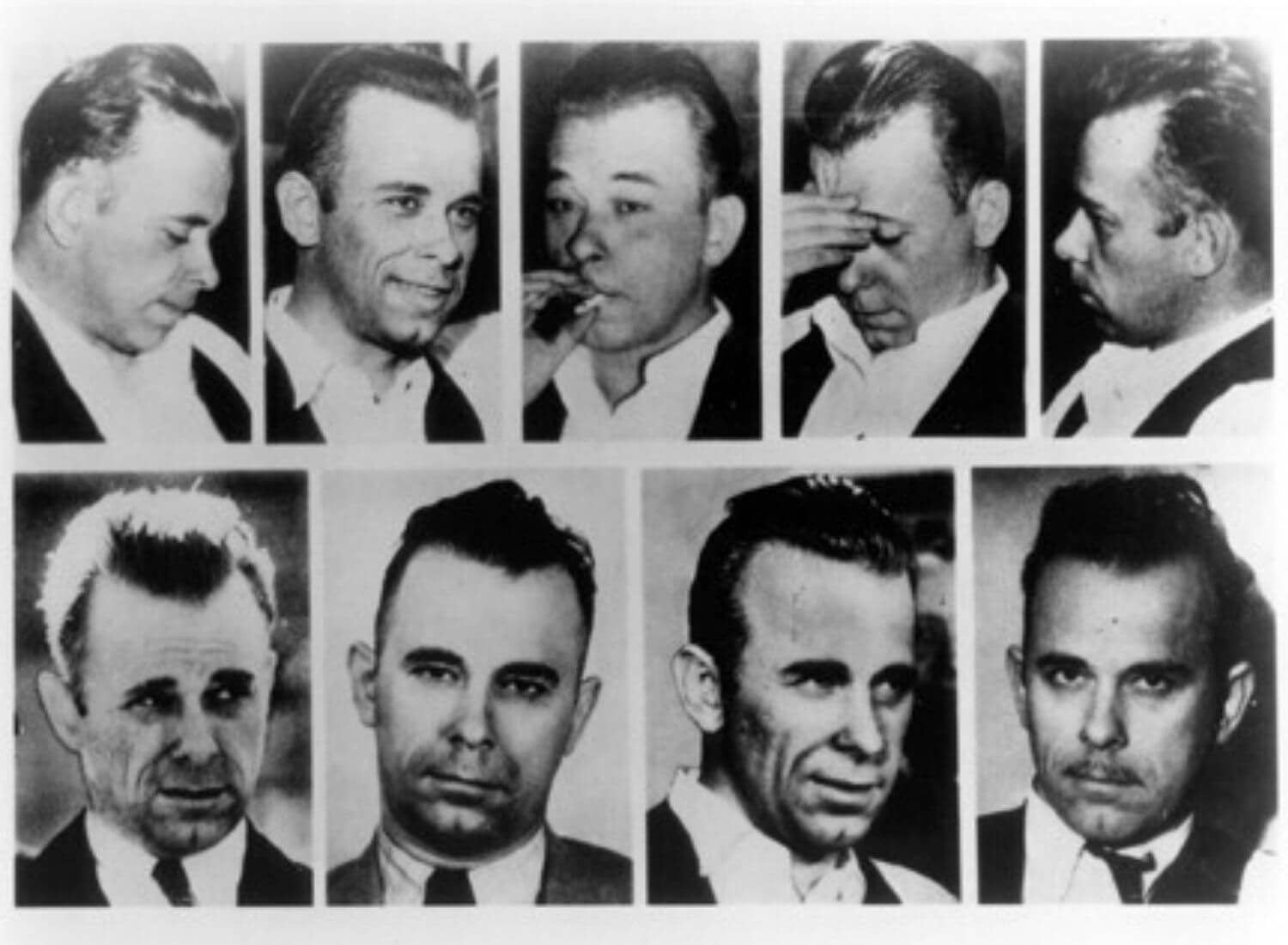 Crime and punishment are the freakiest lovers, even though their relationship lies upon a cause-effect mechanism.

We are well aware of the phrase- you reap what you sow. Irrespective of this phrase, a case of ultimate escape caught the public’s eye and media outbursts. It also challenged the functioning of the FBI. Yes, if you are considering John Dillinger, then welcome aboard.

Table of Contents show
The Early Life Of John Dillinger:
Exposed To Crime World:-
Ordinary Robberies Turned Into A Money Heist:
Carved A Gun Out Of Wood:
He Became Too Recognizable:
Death Of John Dillinger:
Controversies Began Mounting:
Case Closed:

The Early Life Of John Dillinger:

In Indianapolis, on 22nd June 1903, Dillinger was born in a middle-class family. He experienced a tragic loss at the age of four as his mother died. Therefore, his father moved to a new city and remarried. Even after which, young Dillinger was not able to build a motherly feeling towards her. Many believed that Dillinger adapted hostile feelings towards her and his step-siblings. Due to which he also received punishments from his father.

Finally, experiencing a traumatic childhood, he decided to enroll in the navy in 1923 but soon lost interest. Being 21 at that time, he married a girl of 17-year old. Unfortunately, the marriage lasted for a short period.

After his broken marriage, John Dillinger became vulnerable. Once, while working at a grocery store, he met a former convict, Singleton. Exposed to uncontrolled vulnerability, young Dillinger followed the guidance of Singleton and executed his first heist.  The heist was at the same grocery store. He was responsible for nearing killing the owner. To his surprise, the owner was only unconscious.

Realizing the panicked situation, Singleton attempted to strangle Dillinger. However, the police caught them red-handed. John Dillinger served ten years in prison, while mastermind Singleton served only five years. Dillinger soon lost trust in the judicial system and planned for his revenge.

Because of this one episode, young Dillinger lost his innocence and became the God of criminals.

Due to his good behavior, he only served nine years in prison. In those nine years, he planned everything that could challenge the prosperity of the judiciary. In jail, he learned about the convicted bank robbers’ plan, preparing for a crime in the future. Nearly in a week, at Indiana State Prison, he began supplying arms for his friend.

Surprisingly, on 22nd September 1933, police raided the residence where the ‘Dillinger Gang’ resided. He got arrested again and sent to Allen County Jail, Ohio. In no time, his friends were disguised as cops and helped him to escape in broad daylight.

The most famous heist was the Heist of Chicago. Dillinger shot a cop, and in addition to being a robber, he became an assassin too.

Carved A Gun Out Of Wood:

Months after the Chicago heist, John Dillinger and his gang were chilling in a hotel, Arizona. Followed by tip again, the police reached the spot, and without further delay, arrested him. They made sure to send him to Indiana in an aircraft. Not underestimating his potentiality, six guards stood outside of his cell. Despite the six guards, he managed to carve out a fake gun from a razor blade. He placed a hostage at ‘gunpoint’ and fled away. Before cops could gain consciousness about the incident, he was on the road riding a stolen car but made the mistake of touching FBI jurisdiction boundaries.

This incident attracted insane media who were pointing at the police department for their causalities.

He Became Too Recognizable:

FBI agent Melvin Purvis and his task force were appointed the case of John Dillinger. Avoiding the FBI, Dillinger united with his girlfriend Billie Frechette and stayed in Bohemia Lodge. As soon as the police reached them, he escaped again and underwent various surgeries because of being too recognizable. However, his ‘Snake eyes’ remained the same.

Police announced a reward of $20,000 for Dillinger’s head. Considering it as an opportunity, his friend, Anna Sage (fake name), reported his location to the police. Anna was an illegal immigrant and saw this as the only chance of avoiding deportation. Dillinger was present at the Biograph Theatre, Chicago, and police reached there. Finding the background fishy, Dillinger tried to escape but got shot.

Likewise, post-mortem became the ground for controversies. Some people believed that John Dillinger didn’t die, but his look-alike criminal, Jimmy Lawrence did. At the same time, some confirmed that Dillinger is, in fact, Jimmy Lawrence, as he adopted a false identity in Chicago.

Secondly, reports confirmed that the man who died was carrying a firearm. However, FBI officials clearly state that they saw him reaching for a weapon before he got shot. Therefore, they presented the gun received from the body in headquarters. Suspicion arose when it was noted that semi-automatic pistols were manufactured after Dillinger’s death making it impossible to be present there.

Furthermore, his father disagreed that it was Dillinger. Several years later, his sister finally identified the body through a leg scar. At last, it became sensational news that he died. Surprisingly, after 85 years of his death, his body was exhumed in September 2019 in the presence of his nephew, Thomas.

To conclude, John Dillinger will always remain as America’s number one criminal of the 20th century with indelible stories of escape that history will hold forever.

The story of haunted asylums and psychiatric hospitals infested by mentally unwell patients and sadistic doctors who used torture tools and electric chairs is...
Read more

Seth Rich, 27, was an employee of the Democratic National Committee. He was murdered...
Previous article
Was The Assassination of Martin Luther King Jr. Born Out Of Conspiracy?
Next article
The Pursuit Of The Mysterious Planet In Our Solar System
Conspiracy theories