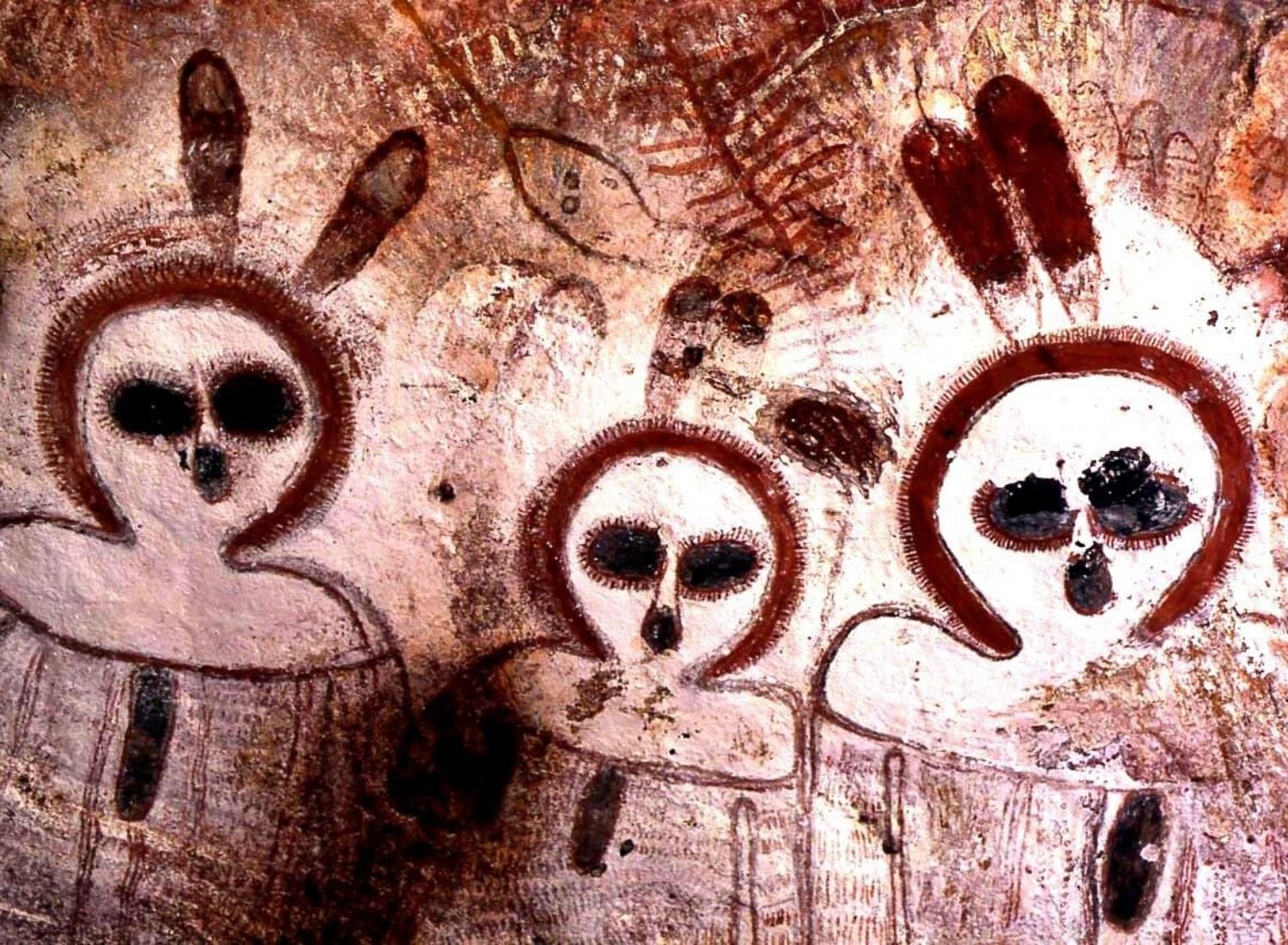 The myth of the Wandjinas remains one of the most intriguing legends of the Australian Aboriginal people, which relates to the supreme spirit beings and creators of the land and people. The land of the Wandjina stretched over an area of about 200,000 square kilometres; consisting of lands, waters, sea, and islands in the Kimberley region of north-western Australia with the unique continuous culture dating back to more than 60,000 years. In this region, the traditional Aboriginal law and culture are still practiced.

Table of Contents show
The oldest and distinctive figurative art
Paintings and their interpretations
The belief in Wandjina
Myth or a reality?

The oldest and distinctive figurative art

The three Wandjina tribes consist of the Worrorra, Ngarinyin, and Wunumbul– these tribal groups are the protectors of the oldest known figurative art, which can be found all throughout Kimberley.

The most interesting feature about their figurative art painted on rocks and in caves lies in the way in which the Wandjinas are described- white faces with a head surrounded with a helmet-like element, large black eyes, devoid of a mouth.

Paintings and their interpretations

Various interpretations have been attached to the ancient paintings by various observers-from abstract representations of people to varying portraits of animals, to ancient astronomical theories suggesting extraterrestrial beings visiting the Earth thousands of years ago making direct contact with the inhabitants. Some representations also hold that extraterrestrials played a direct role in earthly creations, which is reflected in both the Dreamtime stories of the Aboriginals as well as in the myths and legends of many ancient civilizations all over the globe.

Till today, the legend and oral accounts of the Wandjinas have been passed on from many generations similar to the other Aboriginal Dreamtime stories.

The belief in Wandjina

According to the story, the Wandjinas were “sky-beings” or “spirits from the clouds” who descended from the Milky Way during Dreamtime and led to the creation of the Earth along with its inhabitants. The Wandjina then realized the enormity of the task of creating so many inhabitants and returned home to bring more Wandjinas. The Dreamtime snake aided the Wandjina to descend and spent their Dreamtime creating, teaching, and representing the figure of Gods to the Aboriginals whom they created.

After some days following this routine, the Wandjinas disappeared. They descended into the earth and continued to live at the bottom of the water source associated with each of the paintings. According to the popular myth, they continually produced new ‘child-seeds’ there, which are regarded as the source of all human life.  Some further say that many Wandjina also returned to the sky, which now can be traced as lights moving high across in the sky.

Aboriginal people residing in Kimberley believe that although the Wandjina disappeared, they continue to pull the strings of Earth and control everything that takes place on the land and in the sky and sea.

Myth or a reality?

Like the tales located in the teaching of modern-day religions, Aboriginal Dreamtime stories, rock art, and cave paintings have also often been considered more myth than reality. However, the reality of some Dreamtime stories has been confirmed by recent archaeological discoveries.

One such story spoke of huge mammals walking the Earth which were once considered as a fantasy. But in reality, animal fossils belonging to ‘mega fauna’ including giant mammals were discovered which confirmed that these stories were accounts of real-life events, belonging to thousands of centuries before.

Objects have been unearthed on geographical sites which suggest the area had been inhabited as long ago as 174,000 B.C. This argument contradicts the theory that Aboriginals had discovered routes in Africa and that inhabitants traveled from Africa to Australia as early as 60,000 years ago. This substantiates the claim of many researchers that Homo sapiens actually originated in Australia.

Today, the Wandjina is still revered by the Aboriginal tribes of the Worora, Ngarinyin, and Wunumbul, to the extent that only certain individuals are given permission to paint them. According to myth, the Wandjina punishes those to do not abide by the law; with floods, lightening, and cyclones. The Aboriginals hold that the paintings of the Wandjina are always to be approached with due respect since they are believed to possess the powers of punishing the guilty.

An intriguing question remains: why would ancient Aboriginal people create fanciful stories if it is so important to them and remains important to their culture till the present day? Many legends of the past have already been justified by archaeological findings, such as the legend of the labyrinth of the Minotaur, the legend of the city of Troy, Norse legends of navigational crystals, etc.  It can thus be speculated that the Aboriginal people during that time were simply narrating events as they saw and perceived them to be. With time and further discoveries, perhaps one day these questions will be uncovered.

Read Also: The Conundrum of the Controversial Lapedo Child.

The U.S justice system has seen controversial cases from the beginning of time. Some have been left off at dead ends, while some have...
Read more

A macabre event was unveiled when walls constructed of human bones and skulls were discovered underneath a Belgium cathedral. A total of nine walls composed...
Read more

Seth Rich, 27, was an employee of the Democratic National Committee. He was murdered...
Previous article
Who Was The Zodiac Killer?
Next article
Elisa Lam: Was It A Murder, Accident, Or Something Supernatural?
Conspiracy theories