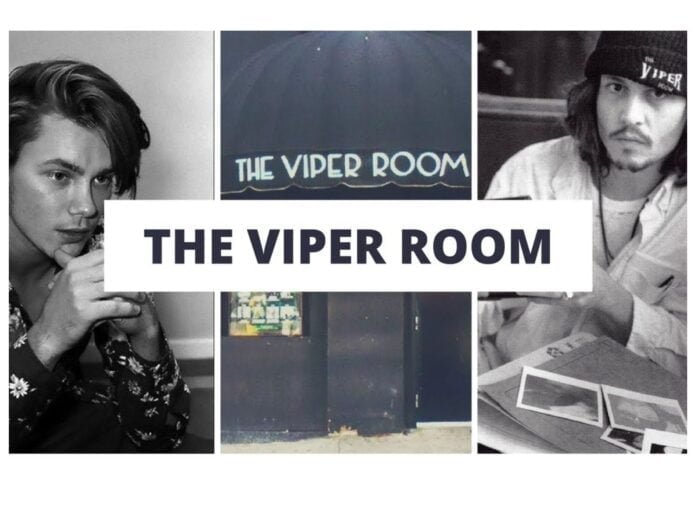 The Viper Room is a nightclub on the sunset strip of West Hollywood, California. It was opened in 1993 and has been famous in the news for various reasons at various times. It is one of the oldest built remaining structures on the Sunset Strip.

The location was originally a grocery store which was bought off and turned into a nightclub in the 1940s. It had many names and owners over the years. On June 14, 1951, The Melody Room took over and brought along the mysterious people of the underworld. Mickey Cohen, a known mobster, used to frequent this place. By the 1980s, the club owned by Anthony Fox was called The Central.

The location became The Viper Room in August of 1993 when it was bought by Johnny Depp, who won it in an auction from Arnold Schwarzenegger. The club quickly became a favorite of young Hollywood stars like Leonardo Di Caprio, Drew Barrymore, Jared Leto, etc.

Death At The Viper Room

It is the tragic story of one such young actor who frequented The Viper Room, which made this place so famous worldwide. River Phoenix, who was 23 years old at the time, visited The Viper Room with his girlfriend Samantha Mathis and younger siblings Joaquin Phoenix and Rain. Forty-five minutes later, he was dead.

Samantha Mathis recalled the night of Halloween of 1993 in a 2018 interview and said that they were supposed to drop off River’s siblings and go to Samantha’s house. But instead, River wanted to stay. A while later, River got into a scuffle with another man, and they both were thrown out of the club. River then collapsed on the ground in front of the main door of The Viper Room. He was having convulsions. There was no one there to help Samantha out, and by the time she called Joaquin outside, it was too late.

Joaquin Phoenix dialed 911 from a help phone, and his call was recorded and eventually aired on all news channels for the entire world to hear. Joaquin was 19 years old then. When the paramedics arrived, they said that River was clinically dead before they arrived. He had died of a heroin and cocaine overdose.

This incident really cemented the reputation of The Viper Room as infamous, but it was still a famous spot for celebrities, and its hype didn’t go down.

A few years later, another incident involving some high-profile Hollywood celebrities brought The Viper Room back in the media’s focus. Johnny Depp, the co-owner of the club, had a case filed against him by his business partner Anthony Fox. Fox alleged that Depp conspired to take millions away from the club and commit fraud.

On December 19, 2001, Fox was ready to testify against Depp, but he went missing. Many believed that Johnny Depp was involved in the disappearance of Anthony Fox. 19 days later, his car was found, but his body was still undetected.

There are rumors that Anthony Fox is buried under The Viper Room in a room with an uncemented floor. The present workers of the club refuse to enter that room. In 2004, Johnny Depp gave up ownership of The Viper Room.

Spiritual activities at The Viper Room.

To make the club eerier, there are various ghost stories attached to The Viper Room. The bartender, Tommy Black, who has worked in the club for 16 years, said that he had seen many ghostly incidents in the club. At a particular spot at the bar, people usually trip, and their knees just give in. Many flying glasses have also been reported at the bar.

According to Tommy Black, the Viper Room has another bar underground, and he feels a kind of constant pressure when he’s there.

After the shooting of an episode of Ghost Adventures and Buzzfeed Unsolved, the alleged voices of the ghost of River Phoenix and Anthony fox have been recorded.

All this only adds to the club’s reputation, which is still running at the Sunset Strip and is a famous hangout spot.

Every now and then, Disney is somewhere playing with the minds of the innocents to create the New World Order. This is done...
Read more

The 2008 Noida double murder case is filled with several theories and allegations which are too bizarre to believe in. The case revolved around...
Read more

Seth Rich, 27, was an employee of the Democratic National Committee. He was murdered...
Previous article
Dark Matter & Dark Energy: The Universe’s Unseen Forces
Next article
Netflix: Are Others Chilling at Your Cost?
Conspiracy theories