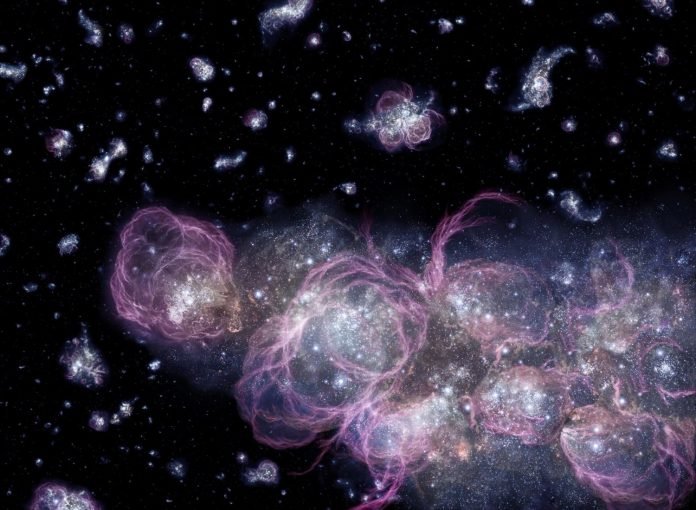 Scientists have been trying to uncover the dark mysteries that lie behind the curtains of the Universe for a very long time now.

Whether it be Galileo, Einstein, or Sir Newton, the whole generation that followed them, many physicists and astronomers have tried to get to the bottom of how the Universe actually works. What’s amusing is that even these great people can’t seem to fathom the two great forces that make up most of the Universe, Dark matter and Dark energy.

What’s even funnier is that nobody knows how this dark matter and energy looks like. All that we know is that something’s out there, and there’s a lot of it (that’s seems creepy). Well, the Universe sure knows how to put on a tricky show.

Table of Contents show
Dark Matter And Dark Energy
So, What’s The Deal With These Forces?
Dark Energy: What Do We Know?

We all know that everything that we see today is, one way or another, made up of matter—starting from tiny particles to massive galaxies. In fact, so are we. Every part of us is matter. Matter is the building block of everything in the universe. Or is it?

After the Big Bang, fundamental particles such as matter, time, space, and energy were formed, which pretty much constitutes the whole Universe, or so we believe.

We all don’t know that the matter as we know comprises only 5% of the whole Universe. The rest is a mystery. Well, not exactly. We do know there’s something. Scientists have no clue what these two forces might be or how they work and decided to name them dark matter and dark energy, which roughly constitute 25% and 70% of the Universe, respectively.

Even if we add up everything that we know, from planets to stars to galaxies and black holes, everything in space makes up to 5% only, which does not equal the amount of gravity that is present, and the rest 95% is just the dark force (no it’s not Star Wars, that’s a whole other universe if it only existed)

Dark matter is made up of complex, exotic particles that don’t interact with light. And dark energy is a strange force that can’t be detected and measured, but its effects can be felt.

So, What’s The Deal With These Forces?

More and more scientists are working every day to find answers to mysteries within the Universe. Our Universe is complex, and space has more energy than the rest of the Universe put together.

Scientists have been coming up with various theories, thanks to the Hubble telescope. Astronomers observed that galaxy clusters were formed from matter, and they were held together with gravity. When they had a close observation, they found out that the gravity of the visible matter was not strong enough to hold or form complex structures like galaxies.

In this case, the stars and other particles would be dispersed off into space, and there’s no way it would be held together in a galaxy. Astronomers suspected that there should be some more potent force that kept the particles together.

This force was also supposed to explain why the outer arms of the galaxy cluster were moving faster than they should be. All things in space are made up of atoms so that when light bounces off, we can see them. But astronomers confirmed that some force did not emit or reflect light, unlike other objects in space, and therefore decided to name it dark matter.

This dark matter doesn’t interact with light. It only interacts with stuff in space through gravity. Its gravity bends and magnifies the light from distant background galaxies. This distortion effect is called gravitational lensing. For example, it’s like the way how rays bend through a lens.

Dark Energy: What Do We Know?

In the 1920s, Edwin Hubble discovered that galaxies were moving away with the Red-shift and he concluded that the universe was expanding. But in the late 1990s, scientists figured that the universe was not only expanding but was also accelerating faster and faster. They claimed that dark energy caused this acceleration, but there was no clear evidence as to what this dark energy could be.

If it was considered a property of space, as space is expanding and there is more energy to fill up the extra space. But this cannot be confirmed as more space or less space; space looked the same from every direction.

There were theories brought up to understand this energy better.

Researchers have tried to come up with an explanation as to what this dark matter and dark energy could be. But no one seems to have the right answer. As of now, all theories are just theories until the Universe wants us to know what it really is.

Famous for its golf sites, St Andrews Cathedral was once the site of the largest medieval cathedral in Scotland but today it stands in...
Read more

Seth Rich, 27, was an employee of the Democratic National Committee. He was murdered...
Previous article
SCAM 1992, Who Started It All, Who Went Down, Who Got Away
Next article
The Infamous Viper Room
Conspiracy theories