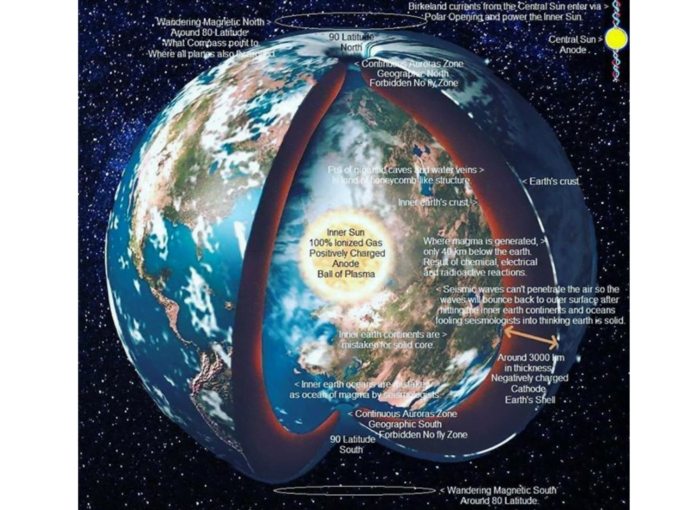 You must have heard about the theories claiming that the Earth is actually flat. But there is a significant section of people who believe that the earth is hollow and actually inhabits an advanced human race in that hollow portion. This theory leaves people with some important, unanswered questions that challenges the whole of humanity and questions our very existence and knowledge about almost everything.

Who Propounded The Theory?

English astronomer and physicist, Sir Edmond Halley suggested this theory of hollow Earth in late 17th century, according to which Earth is entirely hollow or contains a substantial interior space. This theory was however disapproved by Charles Hutton in his experiment around 1774.

A Norwegian sailor, however, claimed that he had sailed through the North Pole through an entrance he found and lived there with his father for years in 1811. He called the place a Paradise, and said that people there were 12 feet tall and were immune from diseases.

Mention Of The Hollow Earth Theory in Mythology

Mythologies and folklores of various cultures do always happen to mention the topic which becomes a debate. These can neither be denied nor be proved. People with a pragmatic approach will always deny them, and call them mere coincidences. Same is the case with the hollow Earth theory.

In Tibetan-Buddhist tradition, there is an ancient city that goes by the name of Shambala, located inside the earth. It derives its mythological relevance from Vishnu Purana, which states that the final reincarnation of Lord Vishnu, known as Kalki, will be born in the city of Shambala, going to be ruled by maitreya, the future Buddha.

Ancient Greeks believed that there are caves under the surface of the earth, which lead to the underworld, the world of the dead, below the human land. Some of these caves are supposedly located at Tainaron in Lakonia, at Troezen in Argolis, at Ephya in Thesprotia, at Herakleia in Pontos, and in Ermion.

In Hindu mythology, these underground spaces are known as Patal Lok, the place of the dead. In the Bengali version of the Ramayana, it has been depicted how Ram and Lakshman were taken by the king of the underworld Ahiravan, brother of the demon king Ravana. Later on they were rescued by Hanuman.

In Mesopotamian religion, people sing the folk songs of a man who travels through the darkness of a tunnel in the mountains of Mashu and lands in an underground subterranean garden.

As per Celtic Iron Age mythology, there is an ancient and mythical cave called Cruachan (Ireland’s gate of hell). Strange beasts were said to emerge from there and be seen on the surface of the earth. Many knights and saints went on pilgrimages in the cave located in Ireland, to the inside of earth to a place that purifies the souls after death.

In county down, northern Ireland, a supernatural race known as Tuatha Dé Danann in Irish mythology, came to earth to introduce Druidism—a class of religious people, leaders who prophesize and serve high ranking people—and went back inside the earth.

Mexican folklore also indicates the existence of a cave in a mountain five miles south of Ojinaga, and that Mexico is possessed by devilish creatures who came from inside the Earth.

In Russian folklore, Samoyeds, an ancient tribe is believed to have traveled to a cave city to live inside the earth.

An Italian writer, Dantè, in his popular work Inferno written in the 14th century depicts a hollow Earth, caused by the fall of Lucifer from Heaven, which dug a funnel so big into the ground that it leads to the underground Patal Lok now.

The elders of the Hopi people, an ancient American tribe, believe that there is an entrance in the Grand Canyon that leads to the underground.

Brazilian Indians, residing alongside the Parima river in Brazil, believe that their ancestors are from the underground and that many of them are still there.

All these mentions of the Hollow Earth theory in various mythologies all over the world, most of whom did not have access to each other, shows that there is perhaps some semblance of truth to it.

Evolution Of The Hollow Earth Theory Across The Centuries

In the 17th Century, in 1692, Sir Edmond Halley proposed the theory of a hollow Earth, consisting of a hollow shell about 800 km thick with 2 inner concentric shells and an innermost core. Each shell has its own magnetic poles. He envisaged this theory in order to justify some abnormal compass readings. He thought the hollow zone emitted light and was inhabited.

He also believed that the gas releasing from the inner surface is what causes Aurora Borealis, the polar light sometimes seen in the sky—actually caused by the disturbances in electromagnetic waves by solar wind.

In the 19th Century, in 1818 John Cleves Symmes Jr. suggested the possibility of a hollow Earth, just like Sir Halley, with a hollow shell as deep as 1300 km. Symmes became the most influential early supporter of this theory. Although Symmes never wrote a book, his ardent supporters and arch-believers of this theory authored many.

William Fairfield Warren, in his book Paradise Found–The Cradle of the Human Race at the North Pole, (1885) proposed the origin of humanity on a continent named hyperborea, in the Arctic. Eskimos and Mongolians were believed to have emerged from a portal on the North Pole.

In the 20th Century, William Reed, in his book The Phantom of the Poles supported the idea of a hollow Earth but without the inner shells and the sun.

The explorer Ferdynand Ossendowski in his book in 1922 Beasts, Men and God, said that he was told about a kingdom that exists inside the Earth. It was known to Buddhists as Agharti.

Then, George Papashvily in his book Anything Can Happen (1940) claimed that a cave in the Caucasus mountains contained human skeletons “with heads as big as bushel baskets” and an ancient tunnel leading to the center of the Earth. A traveler entered the tunnel and never returned.

Dr. Raymond Bernard, in 1964, in his Hollow Earth, has shown the possibility of UFOs coming from the inside of earth. It also perfectly explains the voices we all hear from some unidentified source when we put our ear to the surface of the earth.

Cyrus Teed, a doctor from upstate New York, proposed  concave Hollow Earth in 1869, according to which humans live in the hollow interior of the earth and an outside surface which could be filled with “human aliens” or Vikings from the lost colonies or the disappeared Nazis after the 2nd world War.

There are a lot of natural phenomena that can be applied here to show that the hollow earth theory is not possible. Some of them are explained below.

All evidence provided by the believers, is either mythological or hearsay. Nothing concrete has been found yet. If there are so many portals and such an advanced population under the earth, why haven’t they attacked and captured the upper parts yet? These theories have been ridiculed by modern science.

This theory is gaining significance by each passing day. Though no real life evidence has been found, people are greatly affected by the extent of mythological mentions of this theory. Modern scientists of the 21st century have however refuted such theory.

A recent tweet by Elon musk, the founder of Space-X, caused quite a stir when he joked about the earth being hollow, referring to the new monster movie, GODZILLA VS KONG. The intellectuals are refraining themselves from giving any serious thoughts to this theory.

What does it mean when one says "I'm running out of time"? What is Time? How does it work? Can we measure time? Does it...
Read more

Seth Rich, 27, was an employee of the Democratic National Committee. He was murdered...
Previous article
Mozart – The mystery of the Requiem and his death in 1791
Next article
Catacombs in Paris: Tourist site or place for Satanic rituals!
Conspiracy theories