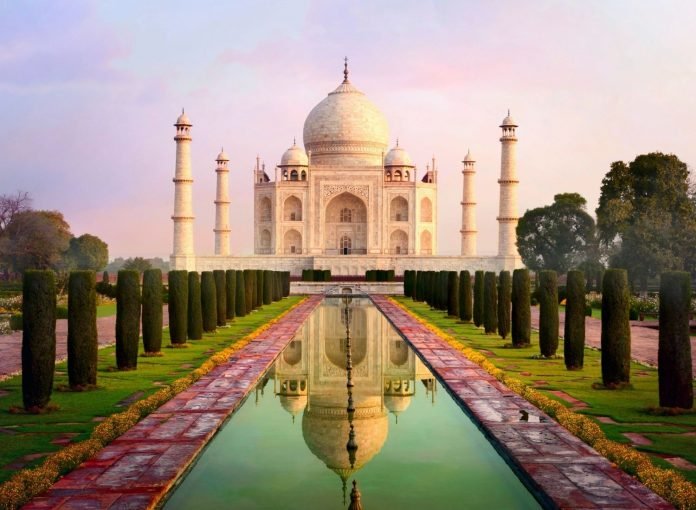 The grand Taj Mahal, a pride of India, attracts several tourists worldwide with its alluring beauty. One of the Seven Wonders of the World itself has dug up many theories behind its origin. Many research enthusiasts are arguing various facts that claim that it is a well-planned Vedic temple and built even before the reign of Shahjahan.

An even more astonishing fact is that many books claim it is a Hindu temple, like ‘Taj Mahal: The True Story by P.N. Oak,’ ‘The Taj Mahal is a Temple Place,’ etc. Along with books, there was a case filed for the same by six lawyers in 2015. Let’s have a look at these facts.

Table of Contents show
The Surprising Name, ‘The Taj Mahal’
Was The Taj Mahal Built By Shah Jahan?
The Location And Architecture
The Questioned Love-Affair
The Story Behind The Closed Doors

The Surprising Name, ‘The Taj Mahal’

The beginning of this long list of facts starts with its name itself as it is believed it’s a corrupt form of the original name Tejo Mahalaya. The word Mahal draws questions as from all the structures built in Islamic countries; there is none based on Mahal as Hindu palaces derive the name.

The historical facts argue that it was named after Mumtaz. So, to clarify it, firstly, the focus should be put that the burial spot of Mumtaz is not called Mumtaz Mahal but Mumtaz-ul-Zamani. The second theory is that while omitting the first three letters, it cannot be concluded as the name, then it should have been Taz and not Taj. The next point to be considered is that Tejo Mahalaya, a Sanskrit name refers to a Shiva temple.

Both the names appear similar too, according to Vishwakarma Vastushastra among the Shiva Lingas (stone emblems of Lord Shiva), the Teja-Linga, Agreshwar Linga (the lord of Agra), resided in the Taj Mahal. Various evidence supports the Taj Mahal(Tejo-Mahalaya), built in 1155 AD by Raja Parmadi Dev.

Was The Taj Mahal Built By Shah Jahan?

There is much evidence, like the chronicle of Shahjahan itself, Badshahnama, that a grand mansion dome-shaped was taken from Maharaja Jaisingh for the burial of Mumtaz. Besides that, there is no confirmed date on which Shahjahan built the structure, and the historical evidence states that it took 22 years from 1631 AD to 1653.

The next evidence to be considered is Aurangzeb’s letter to his father mentioned in at least three chronicles. The letter stated that the place where Mumtaz was buried required repairs as it was old and leaked water from cracks in the year 1652 A.D. There is also an inscription supporting the same, which has now been safely preserved on the top floor of the Lucknow, which has been interpreted as Bateshwar inscription, wrongly.

The inscription carried the wordings about the Shiva temple like a crystal whose beauty is so alluring that Lord Shiva once did not want to return to his usual abode, Mount Kailash. The inscription was set up in the year 1155 A.D. removed from the Taj Mahal gardens on the orders of Shahjahan. Another evidence is that there is no actual cost estimated as Shahjahan mentioned its price to be four million; however, there have been fluctuations and wild guesses ranging up to 91.7 million.

The next thing to be noted is that 20,000 laborers worked to build the alluring beauty; however, there are no muster rolls of laborers, bills for materials, daily expenditure, or commissioning orders available in the court papers of Shahjahan.

The Location And Architecture

The fact that should be considered is the location of the Taj Mahal at the banks of the Yamuna River, which is a prime location for every Hindu temple. The plants grown in the gardens of the Taj Mahal at the time of Shahjahan were mentioned as Bel leaves, Jui, Ketaki, Maulashree, and Champa, which are usually used during the worship of Hindu deities. The Taj Mahal entrance is also placed on the Southern side, whereas it is towards the West for any Islamic structure.

The four minarets interpreted are watch towers, seen in every Hindu Palace that are otherwise connected in an Islamic structure. The second thing to be seen is that the Taj Mahal has an octagonal layout and a reverberating dome, constructed so that the sounds of worship echo.

The Taj Mahal has a trident pinnacle that signifies a Kalash, two bent mango leaves, and a coconut. This symbol has been thought of like a crescent moon for many years now, and the structure even contains toilets that are not seen in any other Islamic designs, according to various researches.

Taj Mahal has an inner well, drum house. There other structures and facilities like the flight of steps going down to treasury, cowshed, guest rooms, stables, guardrooms, etc., which are not necessary for a mausoleum. The Islamic structures typically have bald domes from the top, but the Taj Mahal has domes with a Lotus cap.

Many reports state that the Islamic writings were written over the Hindu ones, which could be seen pale white compared to the entire structure. In the Taj Mahal’s intricate designs, one can find signs of “om,” which is done in Hindu architecture for producing positive vibes.

Besides, a carbon 14 testing was done, which proved that the Taj Mahal was built even before Shahjahan. The Taj Mahal is also known to have a secret route ending at Red Fort, something familiar in Hindu palaces.

There are many eyebrows raised over claims that Shahjahan had immense affection towards Mumtaz. Facts support that Shahjahan himself had 5,000 women in his harem, and he had not done anything significant while Mumtaz was alive. It is also claimed as a myth that Shahjahan used to reminisce about Mumtaz while in prison.

It has been noted in history that Shahjahan used to view the Taj Mahal from a tiny mirror piece and chant the name of Mumtaz while imprisoned by his son, Aurangzeb. In the first place, the small mirror pieces were installed later on by a peon of the Archeological Department in 1930. The second thing is that Shahjahan was kept in a basement and not at a lavish upper story, and in the third place, he had developed a cataract in his eyes. He had pain in his joints, so he practically won’t peer out to see Taj Mahal at an awkward angle straining his neck but turn around and look at it with a full view.

The Story Behind The Closed Doors

Many facts and researches highlight the fact that Shahjahan had filled and blocked the entrances of many rooms of the Taj Mahal to prevent anyone from knowing about its origin as a temple. There was an incident recorded that a resident witnessed in Delhi.

The resident had stated that once he had peered into an opening located at the upper part of the doorway. He expressed the shocking experience that many statues were stored carelessly and mentioned Lord Shiva’s image, which was beheaded; however, the matter was silenced.

In the Anantpur district of Andhra Pradesh, exists a small village of Lepakshi of great historic importance. It is about 15 km from Hindupur...
Read more