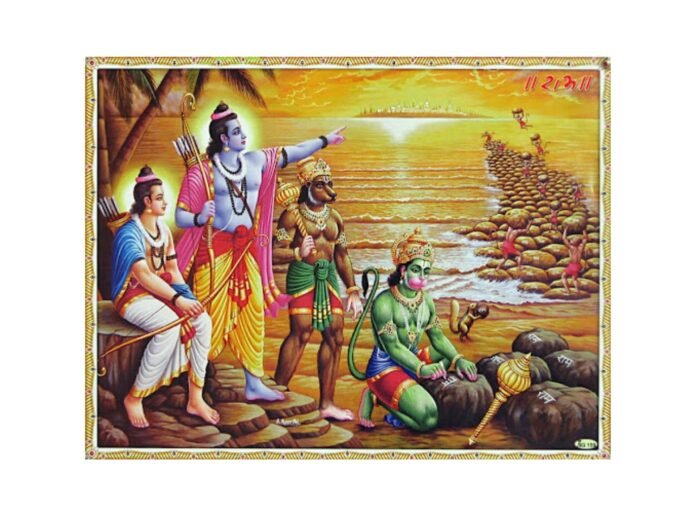 More often than not, people choose to believe in these stories labelled as mythological in our literature. One such story includes the chapter on RAM SETU. There are many ways in which the religious texts and values are deeply rooted in humans; especially, the Indian population. In different religions, the explanations differ on the origin of this Ram Setu- a bridge made of rocks between India and Sri Lanka, which separates the Palk Strait from the Gulf of Mannar. However, the bridge is underwater now, but the mystery still does afloat in the hearts of the people. Let us try to ascertain the source behind such magnificent architecture.

Table of Contents show
The Evolution Of The Bridge Over Centuries.
Theory Behind The Construction Of Ram Setu.
Evidence That Supports The Ram Setu Theory.
The Facts Of The Present Case.
Conclusion.

The Evolution Of The Bridge Over Centuries.

Ram Setu has several names in its pocket. Some of them are Nala’s bridge, Setu Bandha and Adam’s bridge. This 50km long bridge connects the Pamban island (also known as Rameshwar island) in Tamil Nadu to the Mannar island in Sri Lanka.

The sandbars, also known as shoals, are a sand-like structure upon which the rocks rest in a coral reef sequence that ultimately constitutes the Ram Setu bridge.

Now, the records of the Rameswaram temple alongside the scientific research suggest that this bridge was most likely passable till the 15th century, i.e.,  around the year 1482 until it was repeatedly hit by the cyclones, the rise in sea levels and storms which forced the bridge to settle underwater. However, this was once scientifically believed that the water around the bridge is now very shallow, disallowing the navigation of ships through it.

Theory Behind The Construction Of Ram Setu.

The legendary journey of Lord Rama to Lanka to save his wife, the divine goddess Sita, couldn’t have been successful without the construction of a walkable bridge by the monkey-army on the ocean. The legend goes like this: Lord Ram, along with his ape-men, were pacing towards Lanka where they saw a giant sea in their way.

Ram requested the ocean God to give away to cross the sea. That is when the monkey men pelted stones in the sea only to have seen them sink. Nala, at that point, told everyone to write SHRI RAM on the rocks, which would allow them to float on water. And it happened. They managed to form a stone-bridge over it, reached Lanka, defeated Ravana and brought Sita back.

However, as per Abrahamic religions- Islam and Christianity, Adam, “supposedly” the first man on the earth, fell from the garden of Eden onto a mountain in Sri Lanka, now known as Adam’s peak. Moreover, a piece from Adam’s peak fell in the above-stated water bodies, forming a bridge for Adam to cross to reach India.

The first and foremost proof that rejoiced the arch believers of Ramayana was the scientific evidence that the rocks of Ram Setu are much older than the sandbars they are resting upon. Also, the stones were from different parts of the world. It means that it was humans who placed the rocks in a sequence to form a bridge. Later, sand particles were deposited under it due to the changing climate.

A science channel that telecasts the show What on earth? It also affirms that the American scientists have supported the theory of Ram Setu being a man-made bridge; it’s a super-human extraordinary work.

The corals between the bridge cannot be the result of the geological changes in the environment. It emerges as a consequence of some human work, a geologist said.

The Facts Of The Present Case.

Look, you must know that the pattern of the shows like what on earth? It is getting people hooked to the theory by blurting out some flabbergasting pieces like it is undoubtedly the work of some extraordinary human. Then, at the end of the show, they connect the theory to some scientific fact proving that it is a natural bridge.

Hence, these shows cannot be trusted.

Now, the rocks of Ram Setu date back to some 7000 years ago, whereas the sandbar to some 4000 years ago. However, Ramayana is some 1,75,000 years ago if the literary texts are to be believed. The timeline between the two incidents does not change, shattering the belief of millions. However, if one confirms that Ramayana is, in fact, a more recent occurrence, then some things can add up. It can also attach some scientific evidence to the fact that the bridge was, in reality, built after the advent of homo Sapiens. That the Ramayana had happened after humans came into existence.

There is a simple explanation of what must have happened. Some volcanic rocks can float on water. The stones came together after years of eruptions, held themselves in a sequence, and the corals grew between them, causing the sandbar to settle beneath the rocks by the process of sedimentation. Scientists have seen similar kinds of sandbars in different parts of the world, thus proving their point.

There are a lot of debatable topics all around the world that are attached to people’s sentiments and beliefs. The outrage of Hindus over the Sethusamudram project for building a bridge over the Ram Setu is an example of hampering such sentiment. The mystery over whether Rama’s army was the one who built Ram Setu is a highly sensitive topic that should be left untouched. If God has created such a wonder, they must want to intact the mystery around it, don’t you agree?

11 September 2001, a day the entire world refuses to forget and let go because of the devastating act many of them encountered. Termed...
Read more

Seth Rich, 27, was an employee of the Democratic National Committee. He was murdered...
Previous article
The Epic Tale Of Ramayana- 9 Arguments Whether It’s Real Or Mythological?
Next article
Tomino’s Hell: The Deadly Curse of the Poem
Conspiracy theories