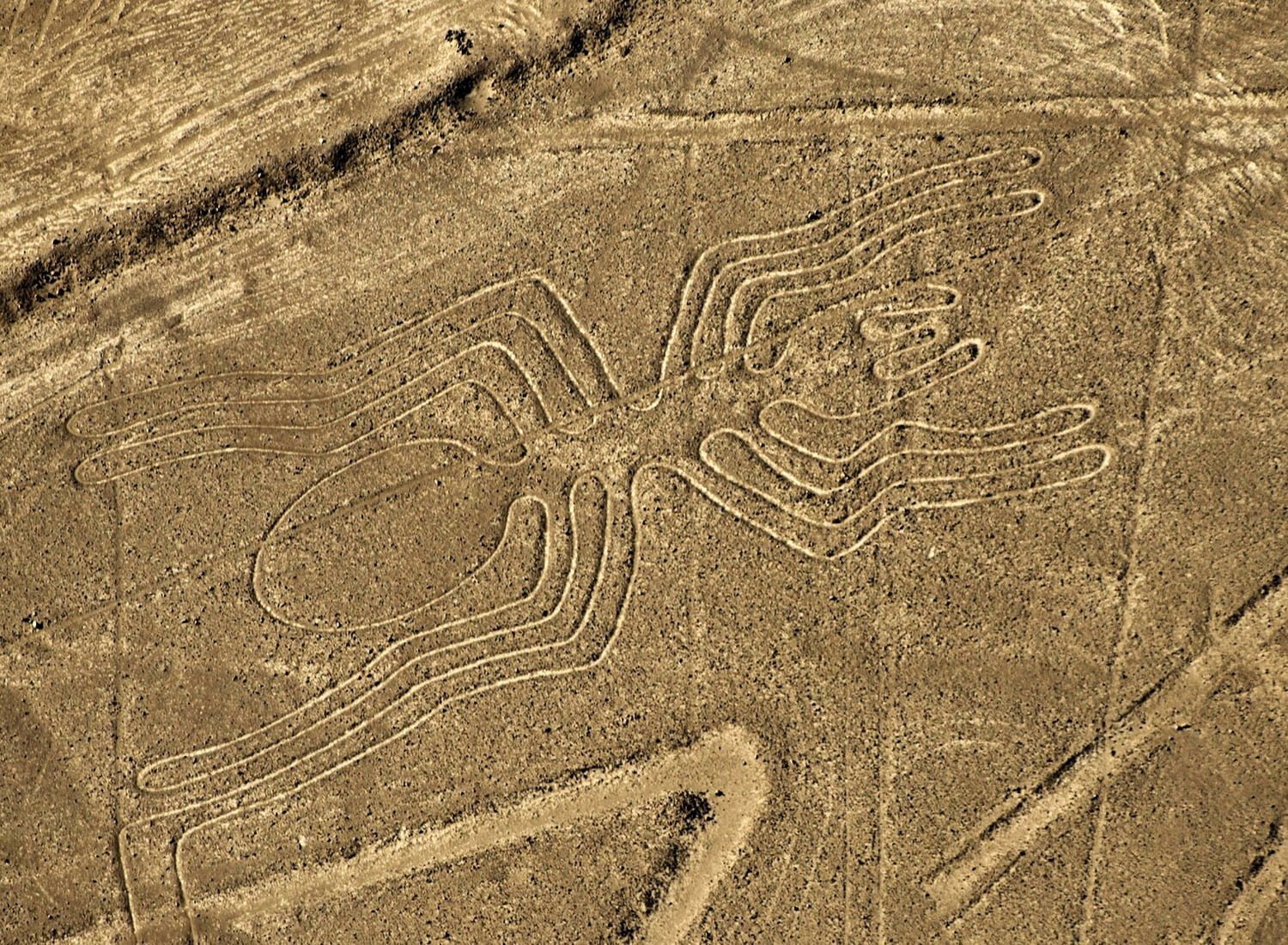 Back in the 20th century, a plane was flying over Peru, near the town of Nazca. In the dull and dry landscape of the desert, shapes and lines came into view. They did not seem to be natural and could only be visualized from a certain height. This was the first time the Nazca Lines were seen in recent history.

What is Nazca Lines?

The Nazca Lines get their name from their geographical location. They are located just outside the town of Nazca, in the south of Lima. They comprise geometric designs and distinct geometrical shapes like trapezoids, straight lines, rectangles, and triangles. Along with these, there are also outlines of animals like the monkey, spider, and hummingbird.

These lines are attention-grabbing because of the sheer excess of the scrawled patterns across the Peruvian desert. There are about 700 straight lines with 300 geometric shapes. Along with these, there are also about 70 designs of flora and fauna found close by. The combined length of these lines is about 1,300 km. These lines and shapes cover a wide area of 50 km square.

The Nazca Lines have survived because of the dry climate that protects these lines and shapes. With almost no annual rainfall, there is no threat of erosion by water. Scientists and historians believe that these lines were made between 500 BCE and 500 CE by the Nazca civilization.

While Scientists and Historians believe that the Nazca people are to be credited for this creation, many theorists believe otherwise.

In an attempt to come to a conclusion regarding the origin of the Nazca Lines, Swiss archaeologist, Erich von Daniken suggested that aliens made these lines.

But, what for? Well, as Landing Tracks. It seems bizarre and maybe even far-fetched, but people believed this theory because among the many figures of Nazca is one of an astronaut.

Most scientists support this claim as the most plausible reason for the construction of these lines. Maria Reiche, a German woman who has spent a significant chunk of her life studying these lines, remarks that the Nazca Lines were a means for the people to keep track of the changing seasons.

This theory also suggests that the lines that seem to cover the desert were a way for the people to map the orbit of the Sun and the Moon. Some people also claim that these lines also show seasonal constellations.

Other related theories consider these lines as part of an ancient ritual to please the universe and summon water. By extension, this theory considers the flora and fauna as fertility symbols to make the earth more yielding.

People look for clues everywhere, and the pottery of the Nazca civilization is one way of figuring out the reason behind these lines. The paintings on the pottery creations hint at some agricultural purpose behind the Nazca Lines. This theory seems to connect to the above-mentioned theory, which could mean that the water channels were also a means of irrigation.

A less popular theory also mentions that these figures were made on such a large scale so that their deities could view them from the sky. As much as these theories seem plausible, they have no concrete proof.

The most believed theory was the Reiche astronomy theory until American researchers in the 1970s disproved it. Some researchers also claim that these lines might have had more than one function. Whatever the case may be, the mystery lives on, and so does the never-ending quest for the truth.

NASA has been showing a steadfast improvement in the field of space technology. Not...
Previous articleThe Unheard Voices Of The Bhopal Gas Tragedy
Next articleThe Appearance Of Virgin Mary
© Newspaper WordPress Theme by TagDiv