The Appearance Of Virgin Mary 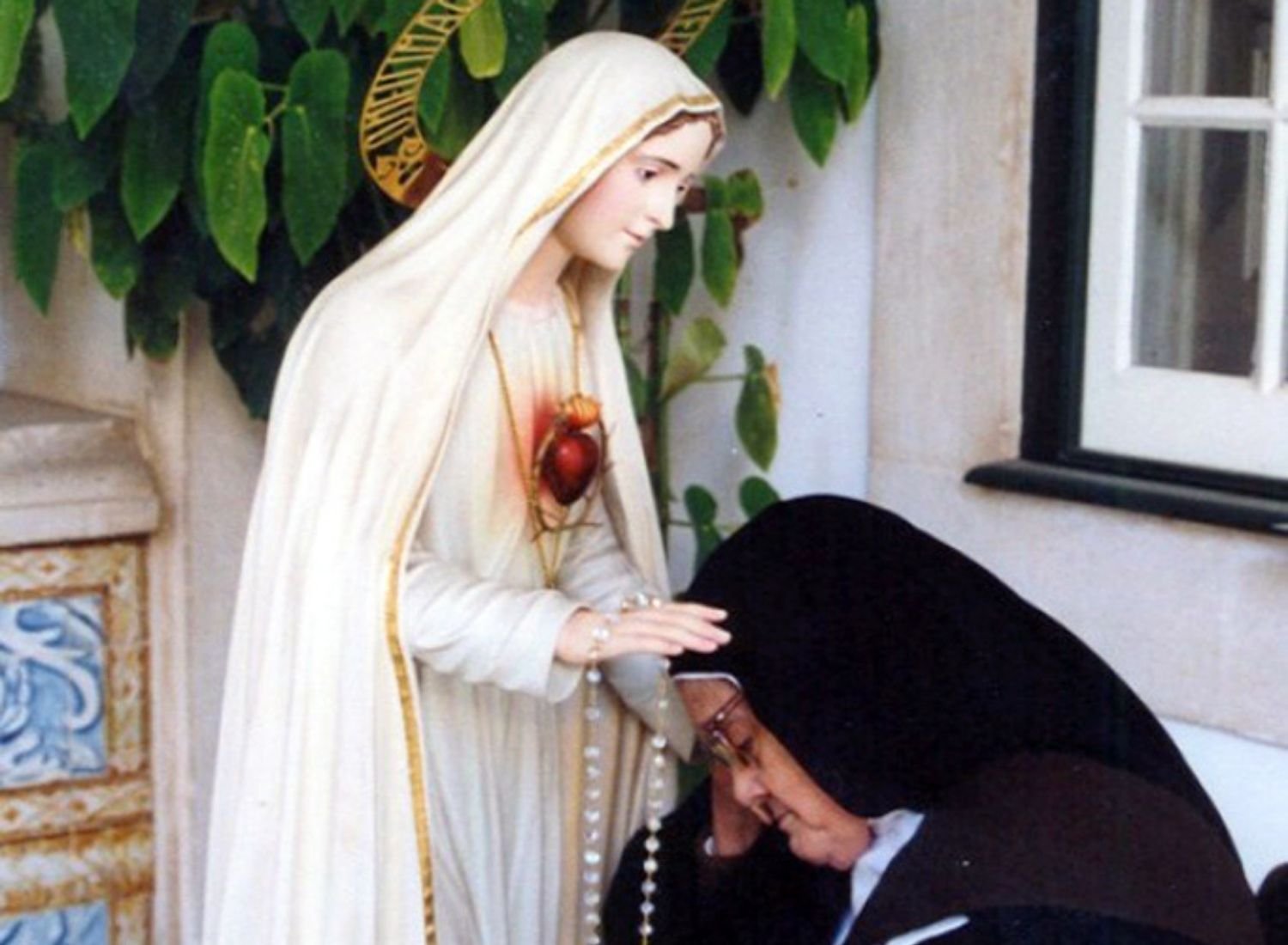 Table of Contents show
1 The Backstory
2 Second Encounter With Virgin Mary
3 Why Did 70,000 People Gather In A Small Town?
4 The Miracle Of The Sun
5 Was It An ‘Act Of God’ Or Visitation By Aliens?
6 The Third Possibility
7 Did Lucia Lie?

This event took place in the small town of Fatima in Ourem.  On the 13th of May 1917, 10-year-old Lucia dos Santos played with her two younger cousins in a field on the outskirts of the town. It was a bright sunny day. There wasn’t a cloud seen in the sky until a sudden flash of light.

They ran towards an Oak tree in the field for some shade. Lucia was close to her cousins, a 9-year-old brother Francisco and 7-year-old sister Jacinta. They usually played together in the field but never saw a flash of light like this before.

That day was different, something that changed their lives forever. As they saw the flash of light, they saw a radiant figure of a lady dressed all in white. Lucia got afraid but was drawn towards the figure and told her cousins to stay under the Oaktree. She went closer to the radiant figure to see who was the newcomer. As she walked towards her, the lady smiled and introduced herself as Mary, the Virgin mother of Jesus Christ.

Lucia called her cousins to come forward, but Francisco didn’t come forward as he could not see the lady. The lady then told him to touch the rosary, and he immediately gained the ability to see her. The radiant figure told them that she’d come to meet the children again on the same date for the next few months so that together they would end the horrific war. She also requested Lucia to pray every day for peace till their next meeting before rising and vanishing in thin air.

The children were so excited that they ran straight towards their home and told their parents about what happened.

They claimed that they saw the children talking to someone. Some of them also claimed to see the branches and foliage around the children disturbed by an invisible force that entered and later left the location.

The following month, a crowd of more than a hundred people gathered to watch the children talking to the radiant figure, but this time, most adults claimed they saw a mysterious haze envelop them before rising in the sky.

By now, the radiant figure’s rumors spread to the local authorities, who started investigating the situation by questioning the children on the 13th of August to prevent the people from gathering again.

After a month, on the 13th of September, the lady visited for the fourth time and told the children to inform everyone that she will visit again for the final time and reveal herself to everyone who will be present at that time. Lucia informed everyone about what the lady said to her.

People started coming to the small town to see the lady who claimed herself to be the Virgin Mary. On the morning of 13th October 1917, an incident took place in Fatima. This day is known within the Catholic Church as ‘The Miracle of the Sun.’  It was raining the previous evening heavily, and the crowd was forced to walk on the muddy footpath to reach the location.

Midday on the 13th of October, it finally stopped raining, but the sky was still covered with clouds. People from different beliefs came to attend the event. Some of them were faithful worshippers, conspiracy theorists, and many more. All of them came to witness the appearance of the Virgin Mary.

The Miracle Of The Sun

On 13th October 1917, nearly 70,000 people were impatiently waiting for the mother of Jesus to appear. Three figures dressed in white robes stood in front of the children, but surprisingly the figures were still not visible to any other person except the children.

Lucia announced that the Virgin Mary was now present and chose her and her cousins to entrust the holy secrets and truths. Lucia also announced that the mother of Lord Jesus, Mary, will end the war raging for the last three years, and she will demonstrate her powers in front of everyone present as proof that she is capable of making good on this promise.

The children raised their hands towards the skies; the description given was different in every theory, but mostly everyone claims that the clouds parted and the sun began to shine brightly. The light generated by the sun was so strong that it could dry rain-sodden clothes and stiffen the muddy ground beneath their feet so that it was solid enough for them to stand upon.

Many witnesses described that the Sun started to move around in the sky above them in a magical and sometimes frightening manner. Some people described it as a cartwheeling motion. Many people also claimed the sun color changed from bright orange to dark purple then from dark purple to a silvery metallic color.

The zig-zag pattern in which the Sun was moving was the most disturbing. In other statements, people said that the sun accelerated towards the ground from burning intensity to normal. This incident happened for the next 10 minutes. People’s screams were mixed with terror and amazement.

Lucia lowered her hand, and the sky again got covered with clouds. After this incident, the church sent several priests to investigate what actually happened.

In the investigation, the priest interviewed hundreds of people and was shocked to see how people truly believed it as God’s act regardless of their personal beliefs. After interviewing them, they had a strong belief that something inspiring had happened in the small town of Fatima.

After interviewing and listening to witnesses, priests of the Catholic Church got convinced that it was a genuine visitation by the mother of Jesus.

In 2017, Pope Francis officially classified this act as a holy miracle and opened proceedings that paved the way for Lucia and her cousins to be canonized.

Was It An ‘Act Of God’ Or Visitation By Aliens?

After this incident, many conspiracy theorists believed it to be a visitation by extraterrestrial beings rather than holy ones. This argument came to light when they interviewed other people outside the state. No one reported the solar effects described by the witnesses from any part of the World.

It only happened in the small town of Fatima, which is why it was believed to be a visitation by an extraterrestrial being. It could also be possible that the bright sun-like light could be a UFO.

Some people believe it to be an act of God, and some believed it to be an extraterrestrial visitation, but then, a third possibility came to light. Some people also believed that the witnesses saw an optical illusion known as ‘Sundog’ or ‘Mocksun’ in technical words; it is also known as a parhelion.

Parhelion consists of either one or two intensely bright halos of light appearing to form alongside the sun. Parhelion is caused when the sun rays are reflected by patches of ice crystals formed in the upper atmosphere. To the witnesses on the ground, it appeared as if the sun’s mass is gradually increasing or decreasing in size; it depends on how large the patch of the crystal is, which the light is passing over.

Parhelions are not restricted to any one geographical area or type of weather. It is usually witnessed all over the globe, but it doesn’t include changing color. Some people also said that it could be a meteorological effect. In meteorological effects, the  Sun color is said to alter subtly when incoming light reflects from the droplets in moisture.

Staring directly towards the sun can cause significant damage to the retina. Staring at the sun for a long time can also tire our eyes and could have created an optical Illusion. Another psychological fact is that we’ll always see what we want to see even if we haven’t witnessed anything.

Everyone who attended the event wanted to see some miracle or expected something to happen, which was enough to persuade themselves and those around them. After this event, many people worldwide started reporting the visitation of the Virgin Mary because of the mental image created by the media after one sighting was reported.

When a mental image is created, we start seeing that particular person everywhere. We see them in shadows, coffee stains, smoke, etc.

Lucia was the youngest of seven sisters; she always wanted to be the center of attention by telling fantastic stories. She always tricked her sisters and parents to become the center of attention, and nobody in her family believed that she saw Mary as they thought it could be another story to get attention. Sadly both of her cousins died of Spanish flu after the war, and Lucia was the only source of information.

Lucia’s predictions took place some years after the event took place. She said that World War I will end. She also claimed that Mary already told her that her cousins would die at an early age, but her mother dismissed her testimony by saying that she is a trickster.

After all those theories, how can it be possible that it happened on the exact day when Mary told them that she would visit for the last time? Maybe heaven wanted to show some of its secrets to humanity. Any theory could be possible, but how can the timing be so perfect— the same day, the same time? Maybe Mary actually visited and showed her miraculous powers to humans. It is still a miraculous mystery for everyone.

NASA has been showing a steadfast improvement in the field of space technology. Not...
Previous articleNazca Lines: 4 Theories You Absolutely Need to Know
Next articleConnecting The Dots Of The Aarushi Talwar Case
© Newspaper WordPress Theme by TagDiv