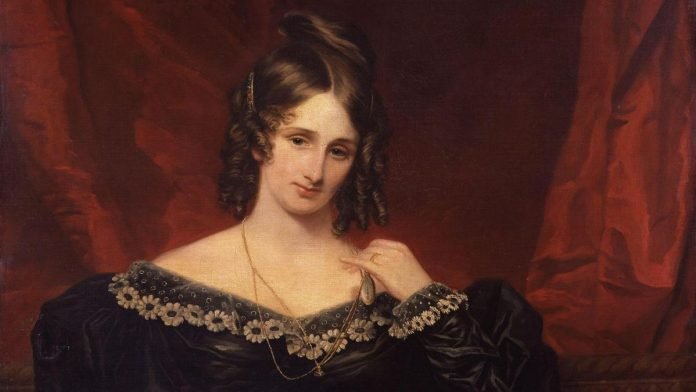 How I, then a young girl, came to think of, and to dilate upon, so very hideous an idea?— Mary Shelley

Table of Contents show
Mary Shelley Works
A novel too complex for an 18-year-old?
P.B Shelley was the original author?
Was William Godwin the true author?
A theory just a result of a misogynistic society?

Mary Shelley started writing ‘Frankenstein’ or ‘The Modern Prometheus’ while she was traveling through Europe with her husband, Percy Bysshe Shelley, Lord Byron, and John Polidori. This trip inspired Mary to write Frankenstein.

The conversations between these writers were based on occult, spiritualism, supernaturalism, and science. Polidori’s conversation with Percy Shelley as based on an account in The Diary is regarded as the genesis of Frankenstein. The season was cold and dark and the 4 writers came up with a competition to write the best horror story.

Consecutively Walter Scott who was a famous Scottish writer declared that Percy Shelley was the original writer of Frankenstein. He recognized Percy’s style in the preface and a poem of his in the novel itself. Even the publisher admitted to the authorship of the preface but denied of the novel!

Mary later wrote to Scott: “I am anxious to prevent you’re continuing in the mistake of supposing Mr. Shelley guilty of a juvenile attempt of mine; to which – from its being written at an early age, I abstained from putting my name.” It did not hold enough ground to prevent the talks.

A novel too complex for an 18-year-old?

Science was just progressing when Frankenstein came out. Galvanization, which is the key subject in Frankenstein was new and as complex as it could have been. Most of the critics asserted that she couldn’t have written Frankenstein. Her youth was the ammunition. She was entirely too young and inexperienced to have created such a literary tour de force.

P.B Shelley was the original author?

Detractors were able to point out the similarities between Percy Shelley’s, and Victor Frankenstein’s character. The topics that are present in the novel – science, atheism, philosophy, etc. are all topics of interest of Shelley. To support this, some experts found excerpts of the novel in Percy’s handwriting! According to Polidori’s diary, Byron didn’t even fancy Mary’s presence and she was not even invited to the horror story writing competition apparently.

John Lauritsen, who wrote “The Man Who Wrote Frankenstein’‘ argues that Frankenstein is constantly misunderstood and misinterpreted. Lauren believes that the theme that was supposed to be highlighted was ‘male love’. He maintains that the revisions made by Mary and primarily William Godwin weakened the novel.

Was William Godwin the true author?

As mentioned above, Lauritsen believes that Godwin wrote the 1831 version. That Mary was just a dummy, who was controlled by Godwin. The writing style and ideas resemble those of Godwin. He was already an acclaimed novelist- Things As They’re, The Adventures of Caleb Williams.

A theory just a result of a misogynistic society?

People under this school of thought are the same that belong to “Was Shakespeare a real entity?”. Some folks insist that Percy did play a significant role in helping Mary but he had no sole role in writing the novel.

Some argue that Mary’s fertile life was the root of her inspiration. She lived a rich and eventful life around intellectuals. Not to forget her mother, Mary Wollstonecraft who was a radical feminist. Alongside her father, William Godwin who was a philosopher and writer. She grew up around radicals listening to enriching documentation of life.

Feminists are in the view that this is just a theory to downgrade the women writers of the early era. And that they were perfectly capable of writing fine literature on their own.

Theorists believe that the bits and pieces of Frankenstein’s drafts in Percy Shelley’s handwriting are nothing close to proof. Mary had always helped Percy with copy-writing and the opposite scenario could’ve been equally possible.

For what it’s worth, everyone has a masterpiece of their own. Frankenstein could have been Mary’s, for she holds the current original authorship of the novel.

To have a better look at the life of Mary Shelley and how Frankenstein came to life, Mary Shelley (2018) is a brilliant movie to look at.

Seth Rich, 27, was an employee of the Democratic National Committee. He was murdered...
Previous article
The Uncanny Waverly Hills Sanatorium
Next article
The Death of Kevin Ives and Don Henry.
Conspiracy theories