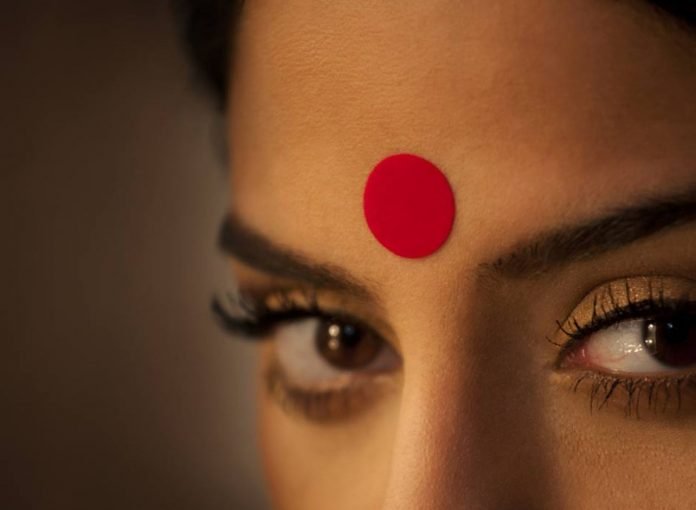 Many women of South Asia, mainly in India, Bangladesh, Nepal, Mauritius, and Sri Lanka – are identified with a distinct dot that forms a popular forehead decoration. It is derived from an old Hindu tradition known as a bindi, which signifies “a drop, small particle, and dot.” The Sanskrit word ‘Bindu’ led to the derivation of the word “Bindi,” associated with a person’s mystical third eye. Although the tradition is rooted in Hindu mythology, Bindis have evolved and have become a popular fashion statement for people worldwide. Many Western celebrities have received a backlash for cultural appropriation for wearing a bindi.

Table of Contents show
1 The Conventional “Red Dot”
2 The Tale Of The “Sixth Chakra” In The Indian Culture
3 Bindi And Its Symbolism
4 Tradition Or Cultural Appropriation?

Traditionally, the married Hindu women of South Asia wear a bright red dot or “bindi” at the center of their forehead or close to the eyebrows. This tradition was traced from the ancient Aryan society, where the bridegroom shaped a long vertical mark or “tilaka” on the bride’s forehead as a symbol of wedlock.

As time evolved, bindis became a fashion statement with other bright colors being availed and with a piece of jewelry placed upon them to further enhance the contemporary fashion statement. According to remote legends, the red bindi is associated with the ancient practice of offering blood sacrifices to appease the deities. In the Indian tradition, when a woman faces the misfortune of losing her husband, becoming a widow, she puts away the luxury of wearing a bindi or any other trinkets associated with married women. They prefer wearing a black dot, while many women now wear a bindi that matches the color of their attire.

The Tale Of The “Sixth Chakra” In The Indian Culture

Following popular Indian mythology, the space between the forehead is known as the area of “command” or the “sixth chakra.” Known as the “Ajna,” this area is believed to be the seat of concealed wisdom. Tantrism, i.e., practice based on the ancient Sanskrit scriptures, believes that during meditation, ajna becomes the outlet for the potent energy which rises from the base of the spine and travels toward the head.

The symbolism of the “red dot” in the center of the forehead is believed to control various levels of concentration in the human body by accumulating the energy gathered by the human from multiple sources. Women adore themselves with this decoration as it is believed to bring good fortune to the entire family as bindi itself points to the base of creation of the entire humankind.

Further, Indian mythology traces that most of the deities have a “third inner eye.” Since God is said to be within all humans, proportionally, even humans are said to possess that third inner eye of intellect and gratitude towards God. The “red dot” signifies reverence to symbolize a constant reminder to keep God at the center of every action and worship him at every step of life.

Bindi And Its Symbolism

The human face becomes the focal point of attraction, beauty and the colorful bindi is one of the spectacular and visually fascinating forms of body ornamentation.

Bindi concretizes the sacred bond of marriage and holds to validate the social status and sanctity of the institution of marriage. As the Indian wife enters into her new household post-marriage, decked up in glittering attire and ornaments, the wearing of Bindi is seen as a sign of prosperity. It makes her a beholder of the family’s welfare and progeny.

However, the symbolism of bindi has traveled a long way, and in this fast pacing world, the ancient connotations attached to the wearing of a bindi are no longer adhered to. It has become a significant fashion statement for women and has found a place on the forehead of all women, no matter what their age is. The red dot traditionally was made with a paste of turmeric powder, lemon juice, and natural colors, such as the juice of hibiscus. Now, Hindu women have replaced the traditional dot with small ornamental jewels.

As gender neutrality slowly becomes the “mantra” of modern society, bindis are not categorized as a body decoration for only women. Modern men are often seen wearing it on a festive or a wedding occasion. The “tilaka” is put on their forehead (both men and women) before the commencement of a campaign and post the successful completion of the assignment.

Our previous generations had perfected the art of making the perfect round shape by hand. However, with changing fashion trends, women are experimenting with various shapes and designs. The conservatives have raised an eyebrow here as the traditional “red dot” has lost its significance. The bindi is now no more a circle but has become a fertile ground for experimentation by the women; the various shapes are further embellished with glitters, stones, and beads. The forehead and instead the bindi have become a channel of artwork supported by various ornamental entities.

The Western Hemisphere has taken up this fashion statement leading to the export of soft power culture outside South Asia in recent times. Many celebrities have taken up this fashion statement; however, the traditional bindi-wearing cultures have accused them of cultural appropriation. These people have to come to terms with the fact that the notion of cultural hegemony started by the Western culture is all about making profits. Their consumerist behavior subdues other cultures’ traditions and morals; power and profit override sentiments and values.

NASA has been showing a steadfast improvement in the field of space technology. Not...
Previous articleMystery Satellite Monitoring Earth? Was It Sent By Aliens?
Next articleAn Immortal Among Us— Keanu Reeves
© Newspaper WordPress Theme by TagDiv