The Conjuring: What Crazy Things Happened in the House? 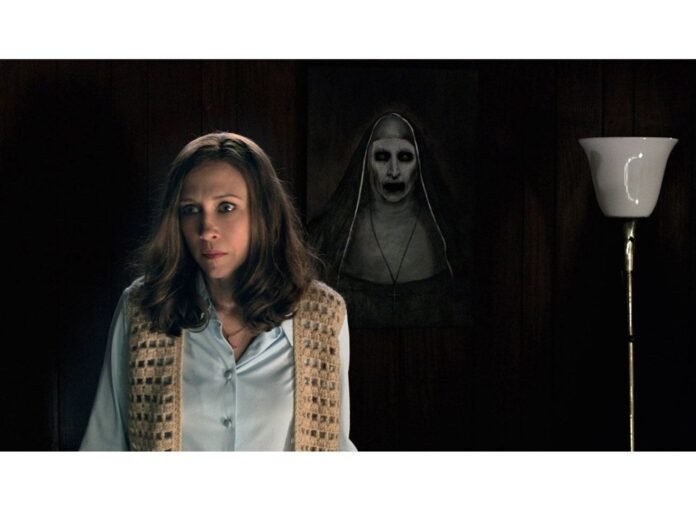 Real-life Roger and Carolyn Perron purchased the Old Arnold Estate in Rhode Island in pursuit of peace. It sounded like a beautiful site to raise five children, or, allegedly, the perfect backdrop for a horror movie, a 200-acre property established in 1736. The family realized something was strange about the property the moment they stepped foot on it. The owner didn’t tell the family about the house’s shady history of rape, murder, and suicide and instead gave them one piece of advice as he handed over the keys: leave the lights on at night.

Amid a blizzard, they were welcomed into a house that creaked, slammed, and whispered in the night. Andrea Perron was the only one of the girls who had her room. One was shared by Nancy and Christine, while Cindy and April shared the other. Andrea’s sisters would come screaming into her bed at night, afraid. Cindy, who was eight years old at the time, cried to Andrea that she had heard a repeated whisper in her room saying, “There are seven dead soldiers in the walls.”

According to the family, the house was haunted by spirits: one kept them awake at night sobbing “Mama,” while another the girls befriended and named Manny.

The Conjuring Movie Vs Real-Life Experiences

The Conjuring is set in 1971 that follows the Perron family, including Roger, Carolyn, and their children Andrea, Nancy, Christine, Cindy, and April, as they move into a new home and the events that follow.

When they discover the demonic Bathsheba is haunting them, they seek assistance from demonologists Ed and Lorraine Warren. What starts as mildly spooky incidents rapidly grow into something far more sinister. They try to clean the house, but things go wrong when Bathsheba takes control of Carolyn and tries to murder her children. But, as in most movies, good triumphs over evil, Carolyn is exorcised, Bathsheba is vanquished, and the family lives happily ever after.

However, the true story is far more terrible, and the ending is not as pleasant as one might hope.

The Warrens defeat Bathsheba by performing an exorcism on Carolyn in The Conjuring, the film, although there was no exorcism in real life because they were not qualified to do so.

Carolyn approached the Warrens directly for assistance with the film, but a family acquaintance contacted the Warrens in reality.

The Warrens are shown to be the sole reason Bathsheba was defeated in the film, while the Perrons allege that the Warrens made the ghosts much worse. The Warrens had a seance during which Carolyn was possessed by a spirit who caused her to speak in odd tongues and levitate in the air.

Concerned for his wife’s mental stability, Roger Perron kicked the Warrens out. The hauntings continued to happen after they left.

So basically, the Warrens did nothing but make matters worse for the Perrons.

The Warrens came over to investigate many times over the decade the family lived there, once performing a séance on Carolyn that, according to Andrea, caused her mother to speak in tongues and levitate. That night, the Warrens with a medium. Perron and Cindy, Perron’s younger sister, hid nearby and watched as the medium “conjured” a spirit to attack their mother. Carolyn was grabbed and thrown into a different room; her body banged shut. Carolyn was possessed, according to the Warrens. Following the incident, Roger Perron allegedly kicked the Warrens out and punched Ed Warren in the face.

According to the Warrens, Bathsheba Sherman was the evil entity who frequently attacked and plagued Carolyn. Bathsheba, who lived in the house in the early 1800s, was accused of murdering a child. Although the accusations against her were dropped, rumours circulated that she had killed the child as a satanic sacrifice. The Warrens believed she cursed anybody who resided in the house to get possession of it.

According to Perron, the family investigated The Conjuring house’s past and discovered at least a dozen people who committed suicide or died tragically in the house or on the site.

Bathsheba wasn’t the only unfriendly ghost to appear in the house; several others did as well.

According to these identical articles, Bathsheba had four children, all of whom died before reaching the age of four, which are based on mythology and local folklore. However, census data from the United States of America contradict this, as we know that Bathsheba had a son, Herbert L. Sherman, who had a long life as a farmer and had his own family. The death of Judson Sherman in 1881. In 1881, Bathsheba’s son Herbert, a farmer like his father, married his fiancée Anna.

The Perron family has been relatively open about their ordeal. Andrea published House of Darkness House of Light, a three-part book on their experiences in the house, in 2011. According to Andrea, the terror in the film had to be toned down compared to what happened.

Some spirits would “act out” when guests were present and create loud noises to attract attention. At the top of the stairwell, a father, son, and dog would come and stare at a wall (as if it were a window), never making eye contact with the Perrons.

Over time, the Perrons did get used to the hauntings. The Perrons grew accustomed to the hauntings over time. Andrea claimed to have seen a spitting image of herself dressed in 17th-century garb. Carolyn once noticed two men seated in the dining room. One of the men noticed her, called the other’s attention, and pointed to Carolyn.

The fact that the majority of the family would gladly return to The Conjuring house is the one genuinely shocking thing.

The Old Arnold Estate has changed ownership a few times since the Perrons left. When The Conjuring was released, Norma Sutcliffe and her companion Gerry Helfrich claimed they had never experienced any spooky happenings, even going so far as to sue the movie company for damages caused by trespassing fans.

The Conjuring home’s present owners, on the other hand, have a different story to tell. Cory and Jennifer Heinzen, who bought the house in June 2019, told the Sun Journal that they’ve had paranormal activity from the beginning: distant footsteps, slamming doors, and the like. The Heinzen’s have shown interest in opening the property to the public for a documentary or possibly tours of the estate that has tormented the Perron family for so many years, which will be of interest to any fans of The Conjuring.

Many people have called the Warrens liars as they do not believe in spirits, demons, and the like. We don’t know if the Warrens are liars or not, but what we do know is that they did not help the Perron family at all. They might have had good intentions, but they made matters worse.

The Perron family have often said that they would move back into The Conjuring house if given the offer.

Do you know other crazy facts about The Conjuring house? Let us know!

A mystery exceeding 135 years and beyond, the story of the Mary Celeste is indeed an enigma. Termed as a Ghost Ship as its...
Read more

Seth Rich, 27, was an employee of the Democratic National Committee. He was murdered...
Previous article
What Is Aum Shinrikyo?
Next article
Did Nuclear Bomb Testing In India Cause The 2004 Tsunamis?
Conspiracy theories