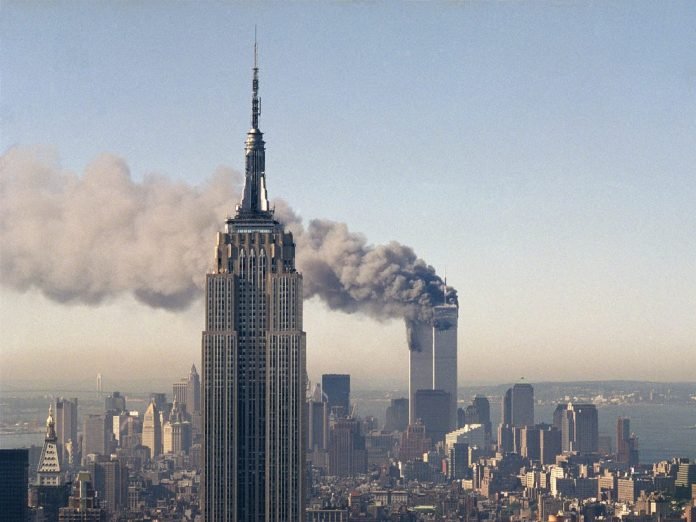 11 September 2001, a day the entire world refuses to forget and let go because of the devastating act many of them encountered. Termed as the biggest terrorist attack on the US in the modern era, it is only natural for the 9/11 happening to have many shades of political, historical and made-up theories. But while some of us would want to accept the Let-it-happen-on-purpose theory, others would vouch for Made-it-happen-on-purpose theory, and yet still, others would have an explanation of their own.  Before we divulge any further, let us keep the basic facts on the table.

Table of Contents show
What happened on 9/11
Controlled demolition?
Flight 93

Two commercial planes flew straight into the twin towers of the World Trade Centre in New York, one flew into the side of the Pentagon, and the other crashed into the ground. These commercial planes were supposedly hijacked by people who “looked Arabic,” behaved as kamikaze pilots and were on a suicide mission. This devious plot resulted in the death of over three thousand people and caused destruction of property exceeding ten billion dollars in the World Trade Centre itself. More than a hundred fire-fighters and police officers lost their lives in a brave attempt to save those stuck in the buildings or under the debris.

But if one analyses the event, there are several questions left unanswered. A lot of details presented to the audience seem fishy and do not quite add up to answer queries of the logical mind. The families of the victims of 9/11 have expressed their dissatisfaction with what has been presented to them as a detailed account of the attack and the report released by the US government looks fabricated on a lot of levels according to them.

One of the biggest shadows of the kind of conspiracy theory surrounding 9/11 is attributed to the US government led by Bush at the time, which accuses it to know the whole thing beforehand and even worse, has also been blamed to have orchestrated it, in order to have a reason to go to war with Iraq and Afghanistan. A lot of theorists believe the same.

The theory of controlled demolition is a hot favourite, owing to the way the buildings collapsed, quite different from what is usually observed otherwise. This suits well because if a building falls standing straight, it may fall in any direction and is bound to cause a lot of destruction to the nearby infrastructure and environment. The videos of the attack clearly show that the building collapsed layer by layer, onto itself, and there were explosions out of the sides of the buildings that were far from the spots where the planes hit, making it believable that there were explosions that at least aided, if not entirely caused, the buildings to collapse.

Some witnesses also claimed that they heard explosions even before the plane hit, but the source lacks enough credibility to base an entire theory on. Another important factor that is taken into consideration in favour of this theory is that commercial planes, like the ones that hit the WTC, are made of very light aluminium (considering the fact that they have to fly through the air) and it is hard to believe that such planes could cause entire structures of over 100 storeys to collapse just out of sheer force.

Another plane hit the Pentagon, and this was even fishier than the one that hit the WTC. Firstly, the aircraft that supposedly flew into the Pentagon was over 120 ft long, but the hole in the building was only around 60 ft. long, which makes one think it might not be an airplane but a missile that went into the Pentagon. Moreover, if a plane or a missile travelled in the vicinity of the Pentagon, the air force would most definitely have been on high alert and done something about it.

Flight 93 was the flight that was hijacked and headed for an unknown location but crash landed into the ground when the passengers revolted. Firstly, the site of the crash was just a crater with no debris bigger than a phonebook. Actual debris was found 10 miles from the crash site, which brings in the possibility that it was actually shot down and exploded in the air causing the debris to be so spread out. Secondly, several passengers aboard the flight called their families and loved ones to say goodbye, which might seem normal, but if you think about it, phone calls were definitely not possible mid-flight back in 2001!

Many people who received the calls claimed that the people who called them introduced themselves by their full name and may not actually have been their family members. Who made the calls? Were they dropped off at a separate location after which the plane was deliberately crashed into the ground to say that the 80 or so people on-board lost their lives to terrorism? Were those people executed? Are they still alive?

In any major event like this when the government doesn’t respond appropriately or reports are contradictory to witness accounts, conspiracy theories are bound to arise. The 9/11 attacks are no exception as we see that in a survey conducted where people were asked if they believed the government report on the incident, over 30% said they didn’t.

While we may look at the 9/11 incident from a lot of aspects and angles, towards the end of the day, we decide what we want to believe in, until then, look out for more than what meets the eye.

Conspiracy lovers can never get enough of the phenomenal bestseller, ‘The Da Vinci Code’ by Dan Brown, combining historical timelines of events with fictional...
Read more

Denver International Airport is located in metropolitan Denver, Colorado in the western United States. It is one of the busiest international airports today. It...
Read more

Seth Rich, 27, was an employee of the Democratic National Committee. He was murdered...
Previous article
Ashoka’s 9 Unknown Men – India’s Illuminati?
Next article
Kuldhara the Haunted Village and its Unsolved Mystery
Conspiracy theories