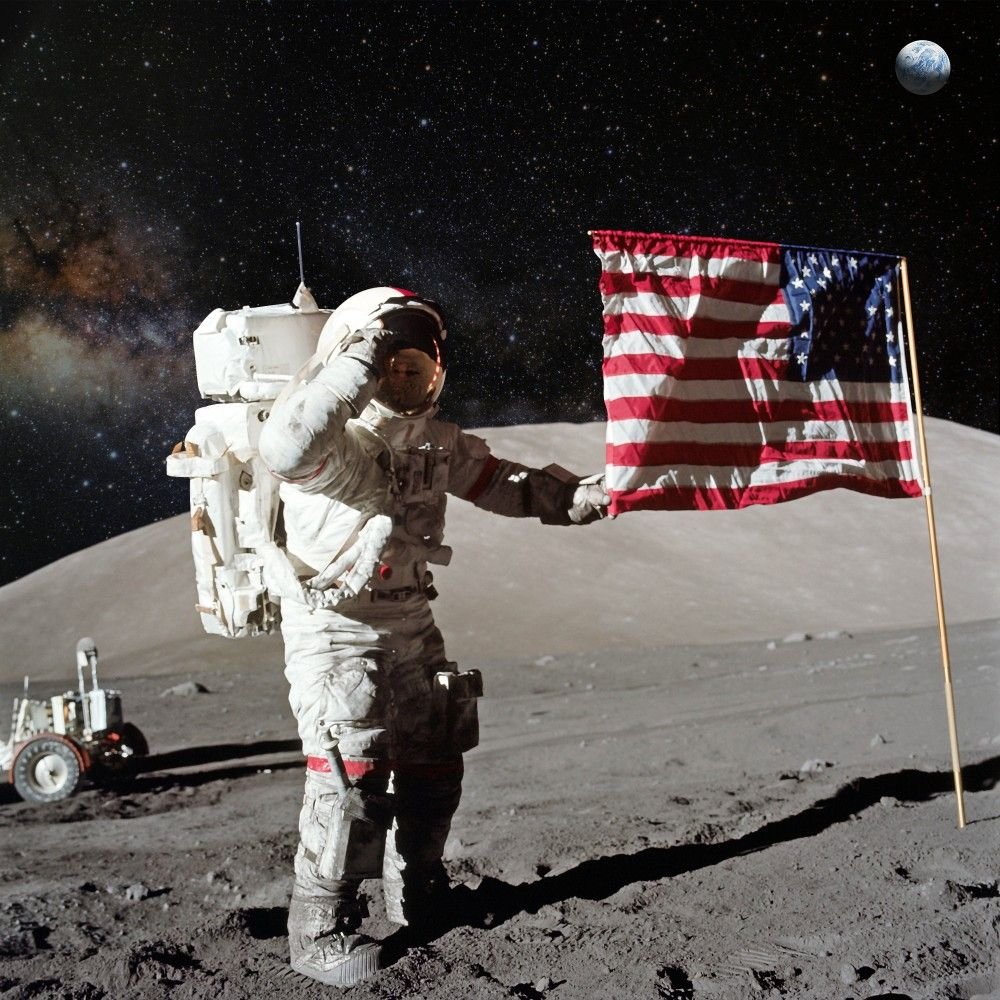 That day they left behind an American flag, a patch honoring the fallen Apollo 11 crew, and a plaque on their lunar module EAGLE’s leg which read “Here men from the planet Earth first set foot upon the moon. July 1969 A.D. We came in peace for all mankind.”

On 19th July 2019, we celebrated the 50th anniversary of the Apollo 11 Space Mission when Neil Armstrong took his ‘giant leap for mankind’, that is if he ever set foot off this planet. With the photos and videos of the Apollo mission only available through NASA, the is no way of verification whether the lunar landings were anything but a hoax. Conspiracy is that the U.S government was desperate to beat Russia in the Space Race and faked the lunar landings on a film set either in the Hollywood Hills or deep in Area 51.

Evidence that it is a hoax

Now there is one major evidence which could prove that this landing was a hoax. There was a film of Buzz Aldrin planting a waving flag on the moon. Critics say that this proves he was not in space as the movement of the flag shows the presence of wind, which is impossible in a vacuum. NASA’s explanation for this was that Aldrin was twisting the flagpole which caused the flag to move. There are many other queries regarding this landing: One is the fact that there are no stars visible in the sky; another is the absence of blast crate under the lunar module, and third is to do with the way shadows fall. There was in actuality no video broadcast during either the landing or take-off, owing to technological limitations. The reason given for this is that with all the known and unknown hazards, NASA would not risk broadcasting an astronaut getting sick or dying on live television.

Evidence that it is true

Moreover, high-definition images which were taken by the Lunar Reconnaissance Orbiter (LRO) of the Apollo landing sites reveal the lander modules and the tracks left by the astronauts. In 2012, images were released showing five out of the six Apollo missions’ American flags erected on the moon still standing with the exception of Apollo 11’s flag, which has lain on the lunar surface since being accidentally blown over by the take-off rocket’s exhaust.

Those who believed that the Moon landings were faked have given several theories about the motives of NASA and the United States Government. One of them is that NASA faked the landings to avoid humiliation and to ensure that it continued to get funding.

In conclusion, I would just say that even if these conspiracies are far-fetched in factual terms, moon landing conspiracy theories call up the more plausible possibility that in our media-saturated age reality itself is constructed, if not falsified.

Yellowstone Caldera Can Wipe Out The U.S.; The Government Knows