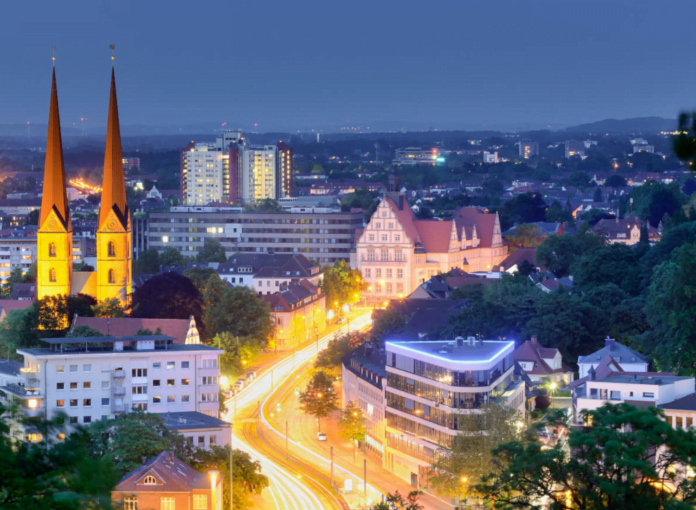 “Hey.” “Hello” “I haven’t seen you around ever. Where are you from?” “I’m from Bielefeld.” “Bielefeld, is it?” “Yes, you sound surprised?” “Bielefeld gibt es nicht” (loosely translated to ‘There is nothing there’). This was the conversation that went down between two people, including one from Bielefeld, at a student party in 1993.

It’s like you suddenly wake up one day, get ready for a student party at your new college to interact with people and one of them says, hey bro, you’re living in a lie. Your city isn’t real, no? What would you do? I would shoot them a weird look and move to another person.

Let’s find out what is the deal with this Bielefeld city.

Table of Contents show
Where Exactly Is Bielefeld?
The Origin of The Rumor
Travel Theories
The Work of SIE
The Illuminati
Illusion And Brainwashing People
Aliens
A Country Wide Joke
Bielefeld Is An Actual City

Where Exactly Is Bielefeld?

In the parts of West Germany, there “supposedly” exists a city which comes under the state of North Rhine-Westphalia, and covers a population of 333,786, given the December, 2019 data. Bielefeld was founded by Count Hermann IV of Ravensberg in 1274. It is the 18th largest city of Germany,  comprising a well-renowned university, a town hall, a castle, a hospital and a famous church site.

In 1994, the city entered into forged Hanseatic League records dated to the 13th Century. People refer to their unknown mayor as “THEM”

It all started with a post on the German server, Usenet, in 1994. The story goes like this- Achim Held, a student from the university of Kiel, posted in a newsgroup, named, “de.talk.bizarre” how a friend of his met a student from “Bielefeld” and well, you know the rest of the story. Achim believes that his little joke was the cause of a plethora of theories being conspired even after 27 good years. As they say, “A good joke never gets old! “

The theory has travelled throughout the country and is known by everyone. If someone opposes the theory, the theorists pose only three basic questions-

“Have you visited Bielefeld?”

“Do you know anyone who visited the place?”

“Do you know anybody who lives there?”

You’ll be surprised by the number of people who would answer “NO” to all three questions. The arguments that the theorists give to prove their theory are a bit unusual but they do succeed in making one wonder.

The Work of SIE

One would notice that there’s no country accomplishments in the name of Bielefeld. Nobody is famous there. It’s not like “hey, a person from Bielefeld won the Olympics for Germany or defeated the U.S.A in a chess tournament!” No, never. It isn’t even situated by a river. This raised a decent amount of fingers pointing at the very existence of the city.

People associate the frivolous fabrication of an astounding city with a secret organization called SIE, meaning THEM in English. It is believed that this organization on their own or through some control over the government forged an entire city to carry out their illicit activities or some top secret mission. Doesn’t it sound like one of those German spy movies where the boundary is just a loosely drawn line?

SIE tries to make the existence of this fake city and uses painted sheets of plastic to pass for satellites and SIE, through holographic technology, has created a simulation so that buildings appear normal from distance. However, If anyone dares come near, they are injected with drugs and put Virtual reality goggles over the person to make them see what they are supposed to.

It is not surprising that a conspiracy of this scale has links to the Illuminati. The area of Bielefeld stretches to 257.9 square kilometers and the telephone code of the city is 05711000. Add the individual digits of each number and you’ll get 23. The city’s administration office is at 23 Neiderwall. The population as per 2002 data, was 323000. Again, 23! This little number is understood to be unlucky for the Illuminati.

People believe that the Bielefeld land was occupied by the British Army after World War II. The German army officers that visited the place were simply brainwashed. It is also understood that sometimes people are kidnapped, kept on drugs and made to believe that they are born and brought up in the Bielefeld city, which makes the whole idea seem a little more legitimate.

They say that if you claim that you live there or have been there, there is a high possibility that you have been deceived or were in an illusion, and a higher possibility that you’re a hired actor to protect the veil. They are located in different corners of the world and plagiarize emails, texts, business, calls, telegram and fax to make it seem like a fully-functional piece of land.

Another stirred conspiracy traces back to our solution to every normal, not-so-normal puzzle, and that would be aliens and UFOs. It is believed that the city of Bielefeld was actually the place where the UFO landing took place and the aliens’ base camp is situated or once existed.

By the mercy of the pre-social media era of rumors, Bielefeld administration was compelled to release a statement in a press conference in 1999, saying that, “Bielefeld gibt es doch”, meaning “Bielefeld is real”. It has become a national issue since then. Reason? The press released the statement on 1st of April. The Bielefeld city Council is believed to be a makeshift headquarters of “THEM” who has publicized fake, morphed photos, videos and stories to make it come across as a normal city.

No German spared their contribution in this little theory of Germany even if we talk about their chancellor Angela Merkel.  She once went to a Bürgersprach, meaning something on the lines of a town hall meeting, in Bielefeld. And, in a interview following that, she made a reference to this meeting and the city, saying that, “…so es denn existiert” (If it even exists) and “Ich hatte den Eindruck, ich war da” (I had the impression I was there) and “Ich hoffe, ich darf wieder hinfahren” (I hope I can go back).

Germans were left baffled after this and would probably have gone into hysteria. Theorists are now strongly adamant on the fact that Merkel realized that she was led into a virtual reality simulator to make a fool out of her. The city even has a nickname now, “The town never there”.

Bielefeld Is An Actual City

The originator himself has admitted that it was all a joke but people are really getting a kick out of it. They just need an excuse to churn out mind-boggling theories that will blow your minds.

As far as National Accomplishments go, we know that the great psychiatrist Christian Friedrich Nasse and the expressionist painter Hermann Stenner were from the city of Bielefeld. There is a tourist attraction in the form of a very pretty castle.

The Bielefeld administration is so sure about the existence of their city that it will award £900,000 to anybody who can prove it doesn’t exist. They say that it’s funnily twisted in the way that people would go to lengths to prove the unprovable.

In 2010, some students from the university located in this city, raised funds through college administration and local private sponsors to make a documentary film on Bielefeld, which goes by the name, Die Bielefeld Verschwörung, and also released it as a book. About 98% of German now believe in the existence of the city.

It is more than clear that for the country, The Conspiracy of Bielefeld is more of an inside joke. People will continue finding instances to prove the city does not exist. However, if there is still a shred of doubt left in you, why don’t you book a ticket to Germany and see it for yourself! Of course, after the pandemic ends!

Seth Rich, 27, was an employee of the Democratic National Committee. He was murdered...
Previous article
Tamla Horsford Case: Accident or Murder?
Next article
The Truth Behind The “Alleged” Sleep Paralysis Demons
Conspiracy theories