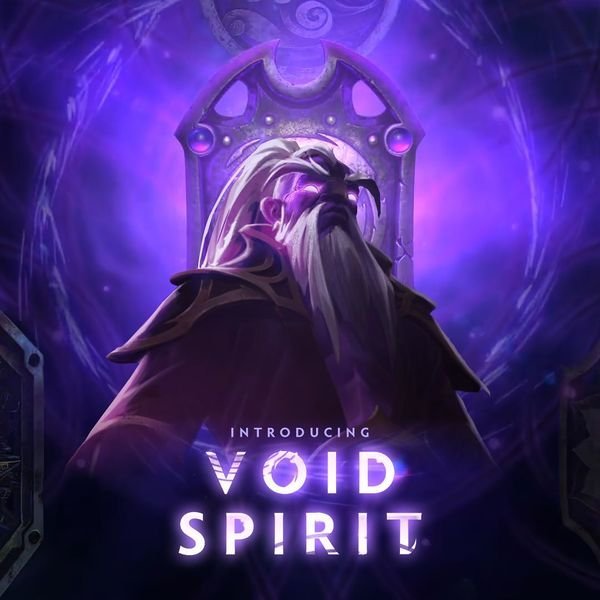 For almost a year, the entire DOTA 2 community have been looking for signs, symbols, basically, scraps that suggest to the existence of a concept of a fourth spirit. Before the TI9, there were only 3 elemental spirits known to the regular players and followers of DOTA 2. However, that changed with the introduction of a new, mysterious elemental (?) spirit during the Main Event of the biggest e-sports tournament of all time, The International. The news gave curious, scouring fans the closure they needed, finally granting them the much awaited 4th Spirit.

Table of Contents show
What do we know about Void Spirit?
The Problem

What do we know about Void Spirit?

We have received very little official information so far about the new hero. After all, it has barely been a week since he was released, so it is unrealistic to ask for more information than has already been given. However, this doesn’t mean that one can’t theorize based off of aesthetic changes made to other characters and heroes from the earlier patches. In this year’s TI’s BattlePass, the subscriber who leveled up to 365 would be rewarded with a cosmetic Arcana set for the hero, Earthshaker.

The description of the cosmetic makes it sound like there are two versions of Earthshaker on two different Earths (dubbing it “Sister Earth”). An earlier, pre-Arcana version of Earthshaker was on the pre-apocalyptic sister earth, fighting against whatever had caused this sister earth to be in this horrible state.

Now, this could mean one of two things, and both are related to Void Spirit. The Void Spirit is called “The Confluence”, meaning the joining point of two rivers. That may be a metaphor since there are two piles of earth into consideration.

Void Spirit could be playing a big role in either or both timelines of the two earths. We could deduce that Void Spirit (in the demo) was talking about being instrumental, saying that he needs to step from his ‘hidden bastion to wage battle alongside my brothers’. What we know from the trailer is that Void Spirit hates the ‘mortal’ plane, but we also know that he is ‘stepping down’ to wage battle alongside the three other elemental spirits. Could this be one of the Sister Earths in some timeline? It is possible that in this (Void Spirit battling) timeline, post-arcana Earthshaker is a sure-fire player.

As far as we know, Void Spirit has potential omniscience and could see Earthshaker struggling in a different timeline. This could have triggered Void Spirit to either a) guide post-apocalypse Earthshaker toward the arcana, in-turn making Earthshaker strong enough to be able to aid in the war against the bringer of the apocalypse, or b) join the fray himself.

Unfortunately, all of the above is wild speculation. We have barely 3 lines in the trailer to go by, and by the tone of the trailer, he doesn’t sound like the savior type. If anything, Void Spirit sounds like he is being dragged into this fight, not wanting to be a part of it. By virtue of his attitude in the trailer, we can also deduce that he ‘abhors’ humans. Why would he help the cause of the greater good, or even join the mortal plane if he hated it so much? At this point, the only thing that makes sense is the existence of the Void Spirit. For now, all we can say is . . .

Who are the Majestic 12? Majestic 12 or MJ12 is actually a top-secret research organization sponsored by the government. Apparently, it comprises of twelve prominent...
Read more

Keanu Reeves has been in the film industry for nearly 3 decades now, and you have to be living under a rock to not...
Read more

Nelson Mandela, born on 18 July 1918, was the President of South Africa. He was known for his anti-apartheid and philanthropic works. He was...
Read more

Seth Rich, 27, was an employee of the Democratic National Committee. He was murdered...
Previous article
DOTA 2: Starring Snapfire!
Next article
How did Bruce Lee die?
Conspiracy theories