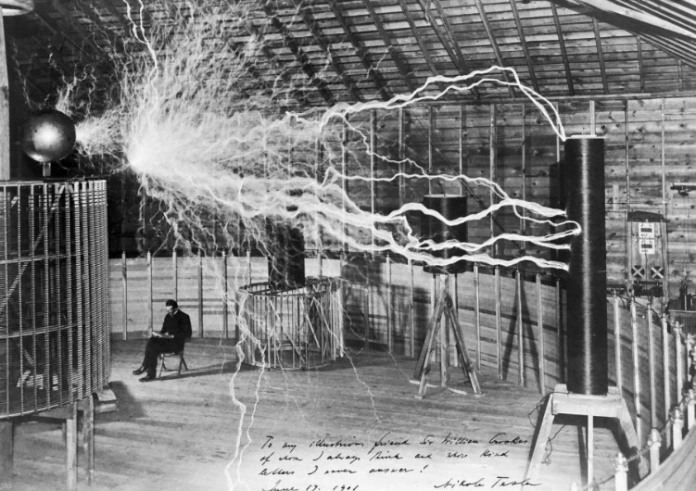 Nikola Tesla, of all the scientists and inventors that have contributed to the innumerable facilities that we enjoy today, Nikola Tesla is an important one. He was a Serbian- American inventor, electrical engineer, mechanical engineer and futurist who is best known for his contributions to the design of the modern alternating current electricity supply system. Since his childhood, Tesla had displayed extraordinary imagination and creativity. He sailed for America in 1884, arriving in New York with four cents, some poems, and design for a flying machine.

He started working with Thomas Edison but that didn’t go very well and they eventually fell apart. He established his own laboratory where he would work for hours and hours and in a matter of time became very famous in America soon getting American citizenship. The first power machinery based on his design was established at Niagara Falls in 1896. In another couple of years, he invented the remote control. While working on his experiments he once claimed that he had received signals from another planet but nobody seemed to believe him.

In 1900, he began the construction of a ‘wireless world broadcasting tower’ which he claimed would provide almost free worldwide communication. The construction was however abandoned due to financial troubles and withdrawal of support from his partners.

Some sources claim that power generating and communication companies were behind this unsuccessful mission of Tesla because of the fear of not earning anything if Tesla’s idea of free networking worked. His idea, therefore, remained in books and is to date studied enthusiastically by engineers to accomplish his vision. In 1915, he shared the Nobel Prize with

Tesla always liked solitude and did not surround himself with a lot of people, but especially during his last days, he kept absolutely no company. He spent all his time in his room 3327 of the fancy New Yorker Hotel and suspiciously enough asked the staff to always stay three feet away from him.

He was found dead in the hotel room by the staff on January 8th, 1943. It was later pronounced that the cause of death was heart failure due to cholesterol which was unsatisfactory because Tesla always preferred a low cholesterol vegetarian diet and did not drink or smoke.

Also, in one of the interviews, he revealed that he believed in maintaining a healthy body and exercised regularly. Some conspiracy theorists suggest that he didn’t really die from natural causes but was murdered by someone who wanted to claim his valuable experiments and ideas.

What is important here is to know what Tesla was working on when he died. On his seventy-eighth birthday, he had announced that he was inventing a ‘Death Ray’, a sort of a tele-force weapon. On his eighty-fourth birthday, he announced that it was almost ready and that he would propose his idea to the government soon. Tesla wanted a peaceful world and was totally against the idea of war.

He had invented this weapon that would bring down planes and destroy armies from a faraway distance so that he would give it to all countries and that way there would be no attacks by any country. He understood that giving the weapon to only one country would mean the death of the rest of the world. Due to his sudden death, however, this vision remained unfulfilled.

What After his Death?

As soon as his death was announced, the government ran to take possession his experimental equipment and papers because everybody knew that he had been working on something that held the power to change the world in all sorts of ways. J. Edgar Hoover, the then Director of FBI declared the documents to be “most secret”. The responsibility of examining and assessing Tesla’s work was handed over to electrical engineer Dr. John G. Trump (uncle of Donald Trump).

He came forward and announced that the papers were of “speculative, philosophical and promotional character” and did not include ‘workable principles or methods for realizing such results.” Tesla family fought legally for the possession of his files and after the long battle, the files were finally sent to Belgrade. What remains interesting in this respect is that out of Tesla’s 80 trunks, only 60 arrived in Belgrade.

Conspiracy theorists believe that the US government kept the 20 trunks containing sensitive information, possibly about the ‘Death Ray’ with themselves and till date have their best scientists working on it. It is also believed that Ronal Regan’s ‘Star Wars Strategic Defense Initiative Program’ in the 1980s was inspired by Tesla’s ‘Death Ray’ experiments. Although the FBI had declassified some 250 papers of Tesla’s work in 2016, some of his work still remains missing.

Tesla was undoubtedly a man of great vision but not without substance. The fact that twice he announced about his ‘Death Ray’ experiment says something about the reality of it. There must have been something that he discovered or invented that made him say so. Earlier in his days too, he invented things that may seem impossible to the average human brain.

Maybe it would have lived another couple of years, the world would today have a ‘Death Ray’. How it would have been used, one cannot say but it would have been there. Maybe Tesla presented his ideas in such a way that nobody other than him could work them out and that’s why the US government has been working on them for more than 60 years to materialize those valuable documents

NASA has been showing a steadfast improvement in the field of space technology. Not...
Previous articleThe Black Eyed Children
Next articleDOTA 2: Starring Snapfire!
© Newspaper WordPress Theme by TagDiv