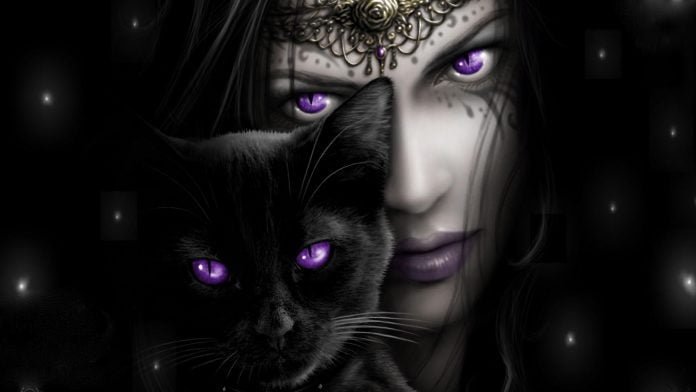 Table of Contents show
1 The legacy of cats and witches: an overview
2 The positive dimension to the legend of cats:
3 The fading glory of the cats:
4 The tale of the witches:
5 From God to Devil:

The legacy of cats and witches: an overview

The origins of witchcraft and the legends of cats lie in ancient Egypt. The Cat was symbolic through the ages in various forms: it was revered in ancient Egypt while it was condemned in the Middle Ages for having some connections to unnatural glory. Cats have also been credited for having connections with other dimensions, some beyond the realm of human knowledge. Even for the population in the ancient Egyptian city of Bubastis, the city god was known as “Bastet”- the cat-headed goddess of incarnation.

The saga of the witches was a misconstrued dimension resulting from the oppression of the Christian churches, especially during the middle ages. The practice somewhat continuing till today, immense torture was inflicted on people thought to be using sorcery, as this was against the tenets of the Holy Bible. These people held as “witches” were said to practice the religions of the ancient eras, thus learning the “trickery” of taking the shape of various animals, particularly cats. The religious leaders preached that cats were an evil creature, carrying a bad omen, and was sent by the Devil himself to encourage the witches for practicing their “evil deeds.”

The positive dimension to the legend of cats:

The credence of the cats possessing otherworldly powers did not start with the religious radicalism of the European Middle Ages, although a lot of negative connotation was attributed to the creature during that time.

In ancient Egypt, the “mau” or the cat was known to be a great hunter which was useful in keeping the rodents away.  The cats themselves were not worshiped. Various human figures including many goddesses in ancient Egypt were represented by the structure of a cat, using either its body or head, since it was a belief among the ancient Egyptians that domesticated cats were the symbol of the goddess bringing fertility and protection. Cats were thus treated with high regard in ancient Egypt, compared to other household pets.

Various other deities in ancient Egypt had a feline form, one such having the head of a lion. For example, Sekhmet, the goddess of war. Among the other areas, the city along the Nile and lying to the northeast of Cairo, i.e., Bubastis put great significance on cats as a whole. This is evident through the many representation and statutes of cats that have been found among the ruins of this city. Further, many Egyptian tombs have placed mummified cats with the people buried there, representing the role of protectors. The form of Bastet was generally that of a lean graceful feline, and at times, half-human and half-cat.

The fading glory of the cats:

Even before decades of Jesus Christ being born, the cities of ancient Egypt, along with Bubastis, was plundered by the Persians. One of the reasons cited for the loss was the reluctance on the part of ancient Egyptian warriors to strike the Persian front; the coat of their arms carried the symbolism of a cat.

Preceding the defeat, the teaching of Hebrews was also gaining strength, the people who the Egyptians had enslaved for years. These events started to mark the demise of the cats being seen as a glory. The teachings were against the worship of so many deities and the adoration of animals that was the norm for so long.

The worshiping and presence of more than one God was seen to be “evil” by the native population, and if someone carried on such practice, they were tagged to have been conducting blasphemy. The term “pagan” meaning “country dweller” came to mean people who did not believe in one God. It was a male-dominated society where female representations and opinions of any form were subdued.

The tale of the witches:

The legend of witchcraft, as cited before, traces its origin to the belief of many ancient Egyptians. One common belief is that such tradition emerged from not one male God but the working together of male and female. Female representations were revered and not relegated to male domination, much like Bastet was.

There is also the legacy of witchcraft being associated with the ability of shapeshifting and changing into other living creatures at their own will. Even the Egyptians believed this study, and staid that the domestic cats were the product of Bastet directly, the Egyptian goddess of the home. The cats were not directly worshipped in either Egyptian or witch folklore. However, it was believed that just like witchcraft, cats have the ability to “see” beyond this world.

The negative connotation to the acts and witchcraft was intentionally misconstrued by many Christian institutions, especially in the Middle Ages. They were able to grapple with minds of locals in villages all over Europe and in parts of colonial America and were able to create a mass hysteria of irrational fear regarding witchcraft. Anyone believed to be a witch was captured, given a mockery of a trial, and was executed. Even the illogical notion of executing cats gained ground since these creatures were held to be “familiars” of witches and the people believed that there was the possibility of witches turning into cats.

From God to Devil:

Ironically, the Black Plague wouldn’t have occurred to take up so many lives if they hadn’t eradicated such a huge population of acts, who were meant to kill the rodents. Similarly ironic is the fact that the legends of the cat which was once revered as the goddess of fertility and well being, was so readily named “evil” by Christian religious leaders, and was thus killed in the name of God.

NASA has been showing a steadfast improvement in the field of space technology. Not...
Previous articleWas Shakespeare as Fictional as His Plays?
Next articleWho Run the World? The Rothschilds
© Newspaper WordPress Theme by TagDiv