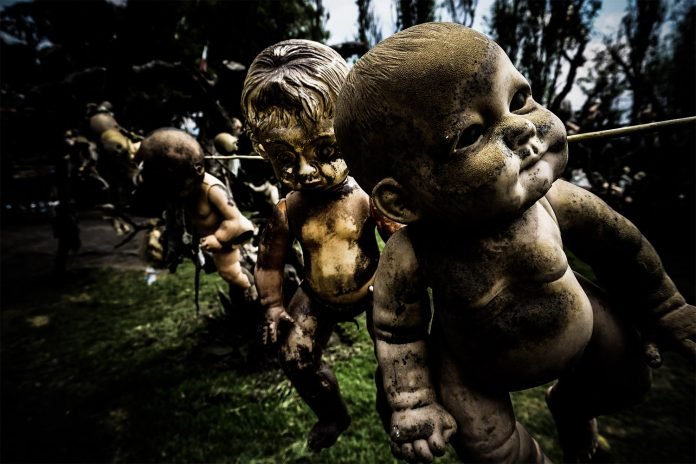 The Island of Dolls (known also as La Isla de las Muñecas in Spanish) is a chinampa or a type of a floating land situated in Mexico City, Mexico. The place has an eerie atmosphere, since, as the name suggests, dolls are placed in every part of the island by its former owner Julián Santana Barrera. The bizarre feature of the island has now turned it into a major tourist attraction. The Island is located on the Teshuilo Lake, in the canals of Xochimilco, which is one of the 16 boroughs of Mexico City.

The Island of Dolls is an artificial island, and not a natural one as seen everywhere. It is known as chinampa, an agricultural innovation brought about by the Pre-Columbian Mesoamericans in the Valley of Mexico.

Table of Contents show
What led to the creation of the Island of Dolls?
Why are so many dolls placed on the island?
Present day:

What led to the creation of the Island of Dolls?

The story of the Island of Dolls can be traced back to the 1950s. During that time, a man named Julián Santana Barrera decided to inhabit the island by living his life as an ascetic and in isolation. He quit his family life to live in solitude.

Santana asserted that while he was living on the island, he was haunted by the soul of a little girl who got drowned in the nearby canal. He claimed to have heard the agonizing cries of the girl and felt her footsteps in the night. Some locals claim that a little girl actually got drowned in a canal and that Santana found her body. However, it was already too late by then and Santana was forever disturbed by the fact that he couldn’t save her. Others, however, believe that such kind of an incident never took place and it was only a fabrication of that event in Santana’s mind.

Not lending an ear to the opinion of others, Santana decided to appease the soul of the girl. Some stories claim that shortly after Santana found the body of the girl, he saw a doll floating in the canal. He assumed that the doll may have belonged to the girl and Santana took it as an indication from the girl’s spirit. He took the doll out of the water, dried, and hung it on a tree as a sign of respect to the dead girl.

Why are so many dolls placed on the island?

Santana Barrera wanted to further satisfy the little girl and started to collect more dolls for the island. He gathered dolls from every corner of the island and also traded with the locals. It was a unique kind of barter where he exchanged the agricultural produce he was growing on the island in return for dolls from the locals. Once the dolls were secured, he would hang them on the island’s trees. A number of dolls were also placed in his cabin.

Santana hung the dolls as he found them; he did not make any further effort to clean or tidy them up. Thus, some of the dolls are now visibly damaged, some missing their heads while the others missing their limbs. Further, exposure to the warmth and winters caused the dolls to become disfigured over time. As a result, the dolls transmitted a spooky aura to the island. Soon, theories and myths started getting attached to these dolls. According to some, the dolls on the island are possessed by the spirits of young girls who come to life at night.

Santana Barrera regarded the dolls as his protector and was not a bit afraid of them. With time, this mysterious island attracted attention and Santana was glad to show the tourists the Island of Dolls. Santana Barrera died in 2001. While some reports claim that he died of a heart attack, the more common claims held was that he got drowned in the same area where he believed the little girl had died.

After his death, the locals decided to preserve the Island of Dolls, since it was becoming a source of revenue as well as an upcoming place of foreign attention. The island has been featured in television programs and articles, further adding to its popularity. The tradition of Santana is still kept alive. The Island of Dolls is now a major tourist destination and those who visit the island often leave behind their own dolls in order to continue the legacy of the island.

For all the fans of The Big Bang Theory, there is little to no need to explain what LHC stands for or...
Read more

Leonardo da Vinci was an esoteric 15th-century artist and thinker of Italy, whose mysterious...
Previous articleGhar Dalam: the Unexplained Cave of Antiquity
Next articleJodha Bai: Wife of Akbar or Jahangir?
Conspiracy theories